Hunt to Kill a good role for Stone Cold

It seems over the past year, that a month hasn’t gone by without a new Steve Austin movie being released. The former WWE star has had a very busy 2010, showing massive dedication to his new found profession and he seems to be on a mission to become a major headline star in the movie industry. 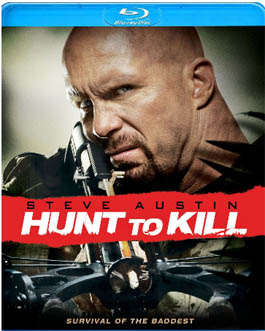 In his new film, Hunt to Kill, Austin plays Jim Rhodes, a Border Patrol agent who keeps watch over the mountains of Montana. When Jim’s teenage daughter Kim (Marie Avgeropoulos) is kidnapped by evil crook Banks (Gil Bellows) and his motley crew it is upto Jim to ensure his daughter’s safety.

He decides to help the crooks navigate their way through the treacherous mountains and forest in order to find Lawson (Michael Hogan), the man who double crossed the gang, stealing millions from them.

The story itself is a decent enough affair as Jim eventually turns against the gang and starts to pursue his own personal game of cat and mouse, hunting down the criminals. Yeah, okay, the story may be a little clichéd and not very original but it is a fun movie to watch and is definitely Austin’s best effort to date.

However there are some really silly, over the top moments in this film that had me in fits of laughter, one in particular near the end of the film where, no matter what Rhodes does to try and kill Banks, he keeps rising from the dead; you’ll never look at a quad bike the same way again.

While over the top at times it has to be said that Hunt to Kill was thoroughly entertaining throughout and a really good watch.

It seems Austin has found what seems to be the perfect character for him to portray, as it is a well known fact that the former WWE Champion enjoys the outdoor life, enjoys hunting and with this in mind it really does translate through the screen that is the role he has fit into easiest.

His rugged appeal shines and because the film is set in a remote location this helps create tension, the action scenes progress slowly but nicely, helping build the ending up to fever pitch.

Austin seems to have learned a lot from his past movies, he looks to be growing and developing in his role as a leading man. Showing more screen presence with every movie.

Hunt to Kill offers everything an action movie fan could want, with lots of good fight scenes and a decent storyline which offers plenty of thrills and spills.

Wrestling fans and action movie enthusiasts alike will enjoy this in equal measure and should definitely gives this film a go.

Austin starting to find comfort level as an actor