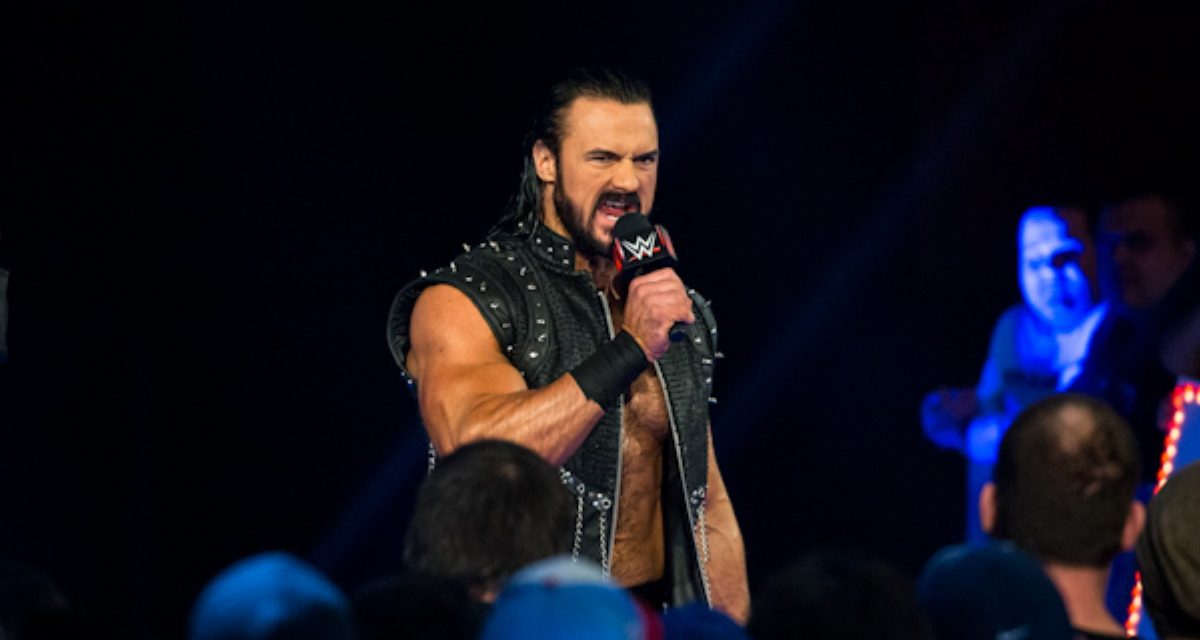 There are a lot of questions and concerns about Drew McIntyre, and his quick rise to the upper echelon in World Wrestling Entertainment.

But in conversation, answering a combination of questions from SLAM! Wrestling readers and the staff, McIntyre is self-assured but not a massive braggart.

He didn’t, for example, avoid the query from reader Jamie Rush: “Why doesn’t he develop some personality or do something to justify all the hype?”

It was obvious McIntyre had heard it before. 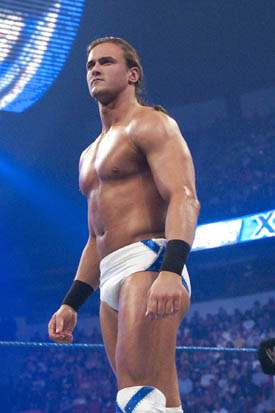 “There’s a lot of hype for a good reason. I don’t know. Maybe it’s just me, but I believe in my head, but I feel that… when I was home in Scotland, I was watching some of the guys in TV talking about how they don’t get an opportunity, blah blah blah, Drew McInytre was the Chosen One, and he gets these opportunities.

“Then I think about it from my point of view. Wait a minute, and I honestly believe this, if an actor in Hollywood has been an actor for 20 years, and some new kid comes along, perfect for the role — he’s good-looking, he’s right, he’s good-looking, foreign, he’s got a sweet accent — this is the guy they’re going to want; we don’t know if he’s got the tools yet, but they’ll give him the opportunity to see how he does, and if he does well, fantastic. If he doesn’t, ugh. But most think this is the guy for the role. They’re not going to look at the guy with 20 years and say, ‘Well, this guy has been around for 20 years. Maybe we should just give him the role because he’s been here for so long.’ That’s not how it works. You’ve got to think how the business is.”

McIntyre passionately went on a little longer, making the analogy that in soccer or baseball, you are often mired in the minor leagues, with no automatic guarantee that you get to move up to the big leagues.

There is a lot of pressure having gotten Vince McMahon’s on-screen approval, he admitted.

“I love pressure. I work best under pressure. … It was pretty much what I’d been working for, for my entire life. This is all I’ve wanted, I worked hard at it since I was a kid. I worked hard in the gym,” the Scotsman said. “I’ve worked very hard to get that thumbs up from the boss himself. It was just justification in my head that all this has paid off. I get the opportunity to do what I always believed I was destined to do. … It just feels like it’s in my blood.”

As Drew Galloway, the 14-year-old Ayr, Scotland native used to make a long commute to the FWA Academy in Portsmouth, which also produced Paul Burchill and Katie Lea Burchill. He did his legwork on the Internet and FWA was the school that he felt would best suit his dreams. Justin Richards, James Tighe and Mark Sloan were his primary trainers, with others like Doug Williams and Paul Burchill coming in occasionally to share their knowledge.

“It was a long day to get there, 12 hours commuting. The first time I was 14,” he recalled of his early days. “Trying to convince my parents was the worst to let me go, because they were just totally against it. They were like, ‘Wait ’til you’re 16.’ Finally I convinced them to let me and one of my buddies go. We had it all mapped out, how we’d get there, the guy would get us at the station. Once you got there, it was a lot harder than I thought, for some reason. I was a bit of a cocky kid, and figured I could just walk in like I did at football and be the best.”

A school run by the BCW promotion would open in Scotland, and Galloway further honed and polished his skills there, under Colin McKay and Spinner McKenzie.

Growing up, the 6-foot-6 Galloway was into soccer, like everybody else in Scotland, “but there was only one place I was ever going to end up, and that was WWE,” he said.

He was a fan of WWE growing up, naming The Undertaker, Hulk Hogan, Bret Hart and Shawn Michaels as favourites.

“There were a couple of the guys, Hulk Hogan, whomever, that were the over-the-top cartoonish personalities when I was a kid,” he remembered, addressing how his tastes changed. “When I got a bit older, I started to realize that it was actually the matches that Bret Hart was putting on, I didn’t realize that through his actions he was creating such a compelling story. Rather than doing a cartoon image, he was just putting a captivating performance on in the ring.” 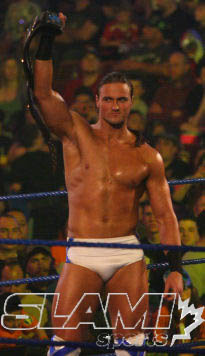 Getting to spend time with his hero on a recent tour of the UK was an unforgettable experience for McIntyre.

“On the UK tour, he was with us a couple of days, and I actually got talking to him a lot. He was a fantastic guy,” he said of “The Hitman.”

“He was a class act. Between himself and his lady, they got me a photograph of myself and Bret… then he actually got it printed for me, and he signed it for me, and I was just blown away that he’d done that.”

When he finally got to start working on independent shows around the United Kingdom, McIntyre found the schedule to be tough.

“In England, it was very grueling. For some reason, the promoter thought it was a good idea to book every show five hours apart, a show every day. So we drove five hours every day for four months in the UK. It prepared me for the rigors of the road,” he said, while holed up in Spanish Fort, Alabama prior to a WWE show.

He said that it was often “impossible to remember” where he is most days while on the road for WWE. “My American geography is not very good, so I just look at my sheet, see where I’m going, and get on the plane.”

One of his frequent opponents in the UK was current WWE World champion Sheamus, who is from Ireland.

“There’s always been friendly competition between myself and Sheamus. We’re very good friends because we know how to get each other up,” McIntyre said. “We used to battle all over Europe and the world, in America as well. As far as I’m concerned, it’s the best match either of us has ever had.”

Sheamus and McIntyre were in the WWE developmental system at the same time, and McIntyre sees big things for them both — perhaps a WrestleMania main event against each other even.

“We’re both planning to take over our respective brands, which is happening quite nicely,” he said. “Then when the time comes, the world’s going to see a match better than the Undertaker and Shawn Michaels: me and Sheamus, both as heavyweight champions. It’s going to be THE greatest match of all time, guaranteed.”

When asked about any hazing, pranks or ribs played on him when he made the main roster, McIntyre said there hadn’t been any. “None at all, actually. I don’t think it’s so bad for that. It crossed my mind that it might happen, but it didn’t; plus, I was in with good company.”

But just in the couple of years that he has been involved with WWE, he has seen changes to the dressing room.

“Obviously, there’s a lot of younger guys,” he said, praising the WWE developmental system, centred in Florida. “Actually, it’s having a system producing so many good guys so fast, because it’s the greatest training school on planet Earth. If you can’t learn the industry there, you can’t learn it anywhere. And that has helped, with the guidance and the kind of minds they have there, they’re just producing guys so fast.

“All of a sudden, the dressing room has gotten a lot younger, producing guys like myself, the Sheamuses and the like. We haven’t been here for that long, but when you look at how many new guys are coming through, before you know it, we’re going to be the veterans. We’re trying our best to just pick the brains of all these guys, watch the guys above us beat the guys, learn as much as we can so eventually we’re going to be the guys taking their spots.” 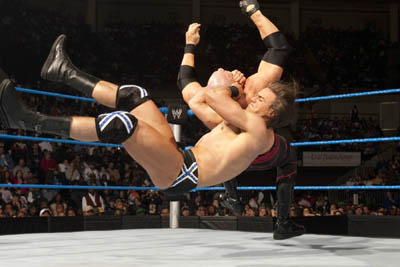 He chuckled at the proposal that his criminology degree from Glasgow’s Caledonian University could help him decipher WWE plots.

“Not so much the storylines, but I can profile some of the guys. Some of the guys are potential serial killers,” he laughed. “Like anything, it can help judge personalities… actions, mannerisms.”

McIntyre has also learned that he can’t change the way people think, and declined to address the biggest misconceptions about him out in the ‘Net.

“I don’t care. I don’t want to correct anything people think. I know on the Internet there’s a lot of stories, and I don’t read them myself,” he explained. “It all depends. My buddies back home will text me things because they believe everything they read. Like my dad will read something and he’ll email or phone me and tell me what’s been said. I just laugh my head off.”

While his friends and family back home in Scotland continue to follow his career, McIntyre has been astounded by the worldwide popularity of WWE.

“It’s popular everywhere,” he said. “Every single country loves WWE. Everywhere we go, I didn’t realize it so much until I traveled with it. They’re big in Europe, everybody absolutely loves it, always sells out.”

“When I started traveling with the company, seeing all the fans in every country, sold-out arenas, shaking the bus. Mexico’s wild. Some of these countries are not exactly the richest countries, but they were willing to spend whatever money they had to come see it.”

A big time fan of “The Beautiful Game” — though he didn’t get to see much of the World Cup due to his schedule — McInytre used to think soccer fans were passionate, but “WWE fans are second to none.”

Greg Oliver has been to Scotland, eaten haggis and stormed some castles, but didn’t see any wrestling during his visit (on purpose). He can be emailed at [email protected].