D-Generation X may be dead (for now) and buried (for now), but thanks to the plethora of apparel, memorabilia and video memoirs of the group of green and black-covered rogues, fans aren’t likely to forget about them.

And with a “biography” out on store shelves earlier this year, fans can get even more documented history of Shawn Michaels and Triple H at their juvenile best. 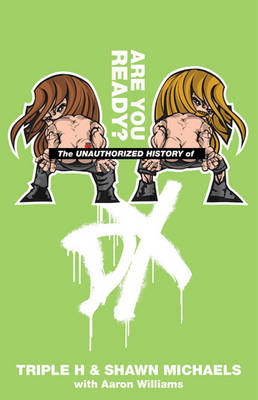 The Unauthorized History of DX, co-authored by HBK and Trips (with help from Aaron Williams) covers the run of the group from the starting days amidst the Attitude Era, up to the recent rebirth (not including the last run in 2009/10).

To say the least, the book is a very easy and quick read on a couple levels. First, for the most part, the text is written in conversation form, with Hunter and Shawn exchanging dialogue, making it akin to reading a transcript from a roundtable or something of that ilk. This style has been employed in the past by WWE (the last I recall being the Hardyz autobiography that came out around a decade ago) and is a style that lends well to DX’s promo nature of banter rather than straight-up mouthing off. Because of this, the reader can easily get the feeling of HHH and HBK chatting, and you can probably polish off the book in the same amount of time as you’d spend watching a shoot video.

Of course, the other reason why the book is such an easy read is because it is targeted to a younger audience. The language is easily digestible for pre- and early teens and is written at a level that they’ll easily be able to take in (albeit not all the content is age appropriate so parents please review first!), so a more advanced reader will cakewalk through the pages of this book.

There’s also a reality with this book that should be known — there’s nothing earth-shattering that you’ll find in the book. The only real behind-the-scenes stuff happens early in the text around the formation of DX and the Montreal Screwjob; and while X-Pac and the New Age Outlaws are mentioned in the book, there’s very little in terms of actual content about DX Version 2. If there was, for example, any mention of the Kane/X-Pac/Tori feud which brought Terri Powers into the DX fold it was a case of blink-and-you’ll miss it. Heck, even the McMahon-Helmsley regime was barely touched on!

So overall, I’m really middling on this one. I can recommend it for kids as an easy read but it’s hard to suggest it as a purchase. If you can pick-up-and-flip this book, do so, otherwise check around for an e-reader version, but I wouldn’t look to add this to your permanent library.