When we last left our heroine, Eve Torres, she was headed into the Fatal Four Way pay per view in June. She was the Diva’s Champion and riding high as Raw’s top female competitor.

At the PPV, however, Torres dropped the belt to Alicia Fox and in subsequent bouts was unable to bring the belt back home. She gets another chance this Sunday at the Money in the Bank pay-per-view to regain the title. 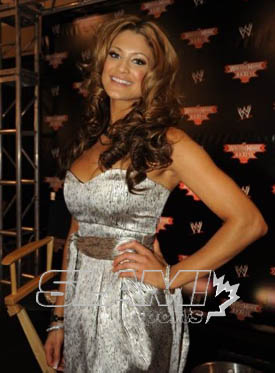 The setback, however, was one that Torres will inevitably take in stride. After all, the people that brought her into fight sports know the hard road of wins and losses very well.

You see, unlike most WWE Divas, let alone all competitors, Eve didn’t get her initial grounding in a wrestling academy or start off in amateur competition; instead, the red-hot femme fatale trained with mixed martial arts’ famed Gracie family. Similar to the Harts, the Gracies were born and bred champions of their discipline and imparted their knowledge of Brazilian jiu jitsu onto lucky students.

Torres explains that the training she received has helped her in her pursuit of wrestling glory, but not necessarily in the way that would first spring to mind.

“It helped a lot — not so much with the actual techniques and moves though they can be applied — it’s more about learning how bodies move; how to be athletic, awareness of your own body and what we’re working with in the ring,” she says. “It’s really helped me with being athletic and moving well.”

Torres also comments that there’s a very personal side to her MMA training. “Being on the road, travelling four or five days a week, as a woman, it’s pretty important that I can defend myself. It’s something I’ve always been passionate about. I strongly believe it’s the only martial art women should learn because it’s based on leverage and technique. It’s so effective.”

So does that mean that, like Brock Lesnar and Bobby Lashley , we could see Torres eventually cross over to UFC or Strikeforce?

“Right now, my place is in the wrestling ring,” Torres says. “My involvement with jiu jitsu is that it’s what I love. As far as competing in it, I really haven’t considered it. I’m never going to say never, but it’s not something I’m looking into.”

What Torres has been working on, instead, has been her move set in WWE. On a regular basis, Eve adds to her offensive arsenal, pulling off new moves like the moonsault and the side-roll suplex. Torres remarks that the desire to enhance her skills comes naturally.

“It’s the way I’ve always been. I’m a very competitive person,” she explains. “I was a gymnast growing up as well so I’ve always had that need for adventure in pushing my body to the limit and seeing what it is capable of.”

Like Divas before her, Torres immediately comments that David (Fit) Finlay has been extremely helpful in this athletic development.

“Finlay is the saviour of the Divas,” she says enthusiastically. “I don’t know where I’d be without him today. He’s helped me tremendously in my matches, in psychology and technique. He works so well with us. I probably owe the most to him and his willingness to always offer a helping hand.”

That work in the ring has not only been seen live in the States, but also north of the 49th parallel, which to many superstars almost feels like entering a bizarre world. After all, a hated heel like Edge will get more cheers than jeers here, while a babyface can often get booed out of the building.

Torres feels, however, that this effect applies to female competition, but not as strongly. “I see it with the Divas too, but the funny thing is with the Divas, it’s hard because even the ones you hate, they’re so hot,” she says with a laugh. “At the end of the day, Maryse is still hot so there’s always going to be a little bit of people wanting to see her do her thing as well.”

That, of course, means that characters aren’t as easy to define as heroes or villains. “It’s not as cut and dry as it is with the guys as far who’s good and who’s bad, but I think it makes it more fun.”

These developments have also been nurtured differently for the Divas. Torres, along with several other current Divas like Michelle McCool, Maryse and Layla, came to the Fed via the Raw Diva Search, which focused more on beauty than brawn, which is a stark contrast to the current competition that introduces male wrestlers to WWE audiences — NXT. Torres is hopeful that WWE’s higher ups will debut a female edition of the show at some point.

“When they told all of us about the idea of NXT, for the Divas that was our first question — will there be women on the show?” she says. “[There’s] a lot of value that could add because we’re always pushing for more with the Divas and bring the Divas to the next level. People don’t really get to know as much as the other superstars because of the amount of time you see us on TV. So having something show what it means to be a Diva… I think that’s what NXT is about — what it means to be a superstar — and I think a female version would be awesome because it could help communicate that to the world.”

In this respect though, Torres has been somewhat more fortunate than other female competitors. Through the Diva Search, being a backstage interviewer and a valet for Cryme Tyme before getting into the ring, fans got the opportunity to really learn about Torres. In fact, she can pinpoint the time when she felt she had really made herself known in wrestling; she warns, however, that there’s still much to be seen.

“When I started working with Maryse is when I really felt like people can start to see what I stand for and who I am. They’ve seen other sides — the interviewer side and as a manager — that was all fun and I enjoyed that, but they didn’t get to see who I am. I still believe that the WWE Universe still doesn’t truly know who I am and I can’t wait for them to really find out. I think there’s a lot more to come and more layers that can be revealed and I’m excited to do that.”