It would be easy to dismiss Mickie James’ new country music career as a novelty given her past career as a WWE Diva. Doing so, however, would ignore the fact that her debut album, Strangers and Angels, is actually pretty darn good.

It helps that James has surrounded herself with many of country music’s brightest talents. Album producer Kent Wells has a strong pedigree in the business, having had a hand in albums by Kenny Rogers, Brooks & Dunn, and most recently, Dolly Parton. In addition, the various songwriters that contributed to the album are all certified hit-makers. Among them, they have written songs for Kenny Chesney, Lee Ann Rimes, Blake Shelton, and Carrie Underwood. 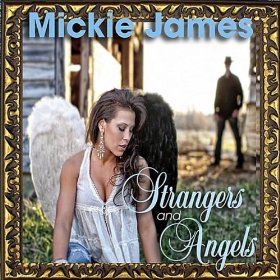 Musically, the album has a current, “new country” sound. The songs range from anthem country rock to ballads, with all of the requisite trappings like the steel guitar and the fiddle. A veritable all-star lineup of country’s studio musicians played on the album, and the results are clearly evident. Of the 11 tracks on Strangers, most of them are radio-friendly and could easily become singles.

Of course, the success of a singer ultimately depends on whether she has the vocal chops — fortunately, for the most part, James does. There are a couple of tracks on the album where her range isn’t as strong as it could be, but it would probably be unfair to expect soaring vocals like, say, Faith Hill, simply given Mickie’s experience in the business. Her voice isn’t necessarily unique — let’s face it, a lot of female country singers sound very much the same — but she can definitely hold her own.

Overall, Strangers and Angels is a solid country album. If you like that kind of music, it won’t seem out of place on your CD shelf. If you don’t, it’s certainly an easy-to-handle introduction to the genre, and assuming you’re a wrestling fan, a decent way to support Mickie James in her post-WWE endeavours.

A pumped up arena song, reminiscent of Redneck Woman by Gretchen Wilson. Mickie’s clearly having fun with this one, in which she essentially proclaims that she’s a country girl. A catchy single that will have the saloon hopping.

James co-wrote this break-up song that’s in the same vein as Carrie Underwood’s Before He Cheats. Her voice isn’t strong enough in the lower registers, which is noticeable in this number.

Surprisingly, this song about a jilted lover uses a sports analogy, but boxing, rather than wrestling. Decent, but not a standout track.

Co-written by Kara DioGuardi of American Idol fame, this power ballad is a definite highlight and could easily get radio play. The orchestration on this one fits well with Mickie’s vocals, which are very strong.

A bit of a risqué tune, driven by a raunchy guitar backbeat. “Don’t you hold back nothin’,” she sings. “Leave me more than satisfied. Make me feel like a woman. And I’ll show you what a real woman feels like.”

A last song of the night kind of ballad. Here, Mickie’s vocal confidence shines through, and she keeps them at this level for the rest of the album after a bit of a shaky beginning. She belts out the chorus, but very aptly handles the playful runs of the bridge. Solid track.

8) When You Come Home Tonight

A Shania-esque love song, with PG-13 lyrics. “And I’ll barely give you time to get through the door. Then I’ll lead you down the hall for a little more. And I’ll love you, I’m gonna love you so right. You’ll be glad you’re mine when you come home tonight.”

9) I’m No Good At Pretending

The second of three songs she co-wrote, this bluesy honky-tonk has strong instrumentation, like a Garth Brooks tune. A catchy tune that could easily get radio play.

Like the other two James co-wrote, this one is a break-up song. You have to wonder if her songs about stormy relationships were written for someone specific. “It’s not easy and I don’t wanna let go. But before I do there’s something you should know. Someday you’ll look back and see what you’ve done. The life you missed out on could’ve been the one.”

This one is billed as a Bonus Track, but it’s not clear why. Lyrically edgy, this one is about confronting the other woman, with potentially violent consequences. A strong closer.