Mat Matters: Swagger still hasn’t been given a chance

There was some surprise among wrestling fans at WrestleMania, when Jack Swagger — and not Drew McIntyre — was the wrestler to pick up the honours in the Money In The Bank ladder match. That feeling was multiplied when Swagger took the World Heavyweight Title from Chris Jericho at the Smackdown TV tapings just two days later.

But what was not a shock was that Swagger’s task of getting over as champion was made more difficult than necessary; after all, WWE haven’t exactly proven themselves to be patient, or clever, in creating stars in the last ten years. In an interview published in the UK’s Fighting Spirit Magazine in March, for example, Jim Cornette reeled off to me a list of upcoming talents that WWE had driven completely out of the business, such as Nick “Eugene” Dinsmore, the Spirit Squad’s Jonny Jeter, and Doug and Danny Basham. None of those names conjure much positive thought, but were they ever given a chance to reach their full potential? 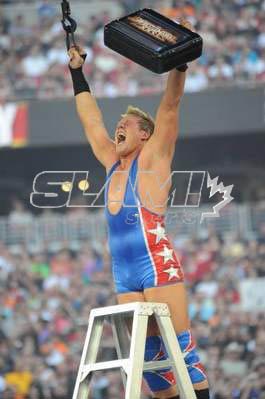 Jack Swagger claims the Money in the Bank briefcase at WrestleMania 26. Photo by Mike Mastrandrea

But in any case, back to the subject of Swagger. Not only was it difficult for the former All-American wrestler to come away from his win with any heel heat because he was taking the title from another heel in Jericho — something which confused the fans in attendance, who wondered if Jericho was turning babyface — but as an on-screen character, he’s had less preparation for a major title run than anyone in recent memory.

In the months leading up to WrestleMania, in television singles matches Swagger lost to MVP, Yoshi Tatsu, Santino Marella, and Mark Henry (the latter two, admittedly, in loser-is-thrown-over-the-top matches), with his only singles match wins coming against MVP and Santino Marella. When he took the title from Jericho, then, the fans watching couldn’t help but believe that Swagger was just a paper champion — a performer not to be taken seriously as a title-holder — hardly the type of build that is going to entice fans to entice fans emotionally, or fiscally, into future title defences.

In the build to WrestleMania, Swagger also lost singles matches on television to John Cena and Triple H. Given that he was to take the title just after the big event, he should have been taking wins from those contests — even if they were garnered by underhanded means — and developed a hot-streak of victories which would have made him a more credible champion. A reason for his change in fortune should have been established by the various television commentators, and Swagger should have been allowed the time to declare that he wasn’t a star of the future, he was the star of right now.

All of the above, of course, is predicated on the idea that you have your ideas set out for several months beforehand. Following last year’s WrestleMania debacle — where only Shawn Michaels’ bout with The Undertaker had a timely build — things were markedly better this year, with that rematch, the implosion of Legacy, Chris Jericho versus Edge, and the Bret Hart versus Vince McMahon bout receiving significant play over the course of the prior three months or more. With those matches so well planned out (actually, the Legacy dissolution took too long to occur), one wonders if the creative team had time for much planning toward Money In The Bank or its aftermath.

For all the problems with putting the title on Swagger two weeks ago, and as back-asswards as the logic is, there was still chance to begin to recover the perception of Swagger once the belt was around his waist. But on the next television show after he took the title, Raw on April 5, not only did Randy Orton lay out the new champion at the beginning of the show, but he also RKO’d his way to victory in the main event as well.

The loss is at least building to a chance for Swagger to get his revenge at Extreme Rules, even though he and Orton compete on different brands. One would expect Swagger to retain the title on that night, but if the booking “logic” that has been afforded to him so far continues to the pay-per-view, that may not be the case.

Argue all you like about whether Swagger has the overall talent to deserve to hold the World Heavyweight Title at this stage, but there’s no doubt that the 28-year-old has thus far not been given the ball with which to run.

Speaking of the ball, the situation reminds me much of a quote from former Manchester United soccer captain Roy Keane: “Fail to prepare, then prepare to fail.”