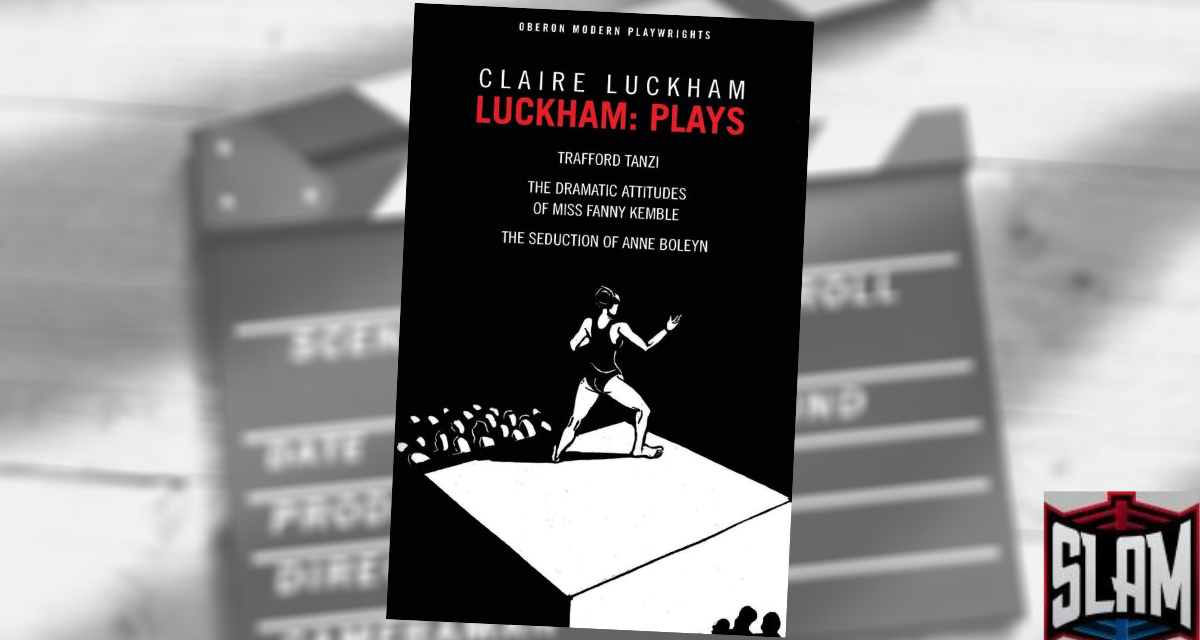 Very often, when a wrestling fan is asked by a non-wrestling fan about the appeal of the sport, a comparison is drawn between wrestling events and live theatre. If you’re the wrestling fan then you’ve said something like this before: “it’s all about the characters, and you get caught up in the storylines.” Well, just over 30 years ago, a British playwright named Claire Luckham was onto this connection and wrote a play called Trafford Tanzi, the latest incarnation of which just completed a run at the Village Theatre in Waterdown, Ontario.

Luckham devised a structure for her play whereby her heroine, Tanzi, exhibits her life and all of its conflict within the ropes of a wrestling ring. The “Trafford” in the original title refers to an area of Manchester where the play was first performed in 1980. The fact that the play was written and performed years before the wrestling boom of the 1980s speaks to the fact that it is much more of a curiosity than still-to-come attempts to cash in on the wrestling craze such as Body Slam or Micki + Maude. 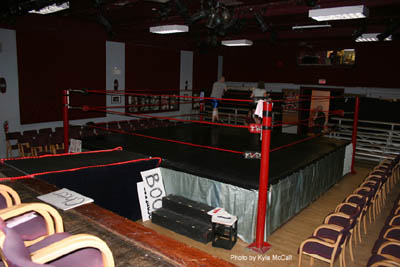 A shot of the stage set in Waterdown. Photo by Kyla McCall.

Luckham’s play was originally selected for performance by The Monstrous Regiment Theatre Group, noted as a “feminist theatre group” in Cambridge University Press’ bio of the playwright. To be sure, long before the Spice Girls were bringing girl power to the British Isles, Luckham created Tanzi as a woman who throws aside her parents’ expectations for her to be a docile young woman and instead embraces her tomboy side to become a wrestler. Ultimately, her journey climaxes with a fight between herself and Dean Rebel, also a wrestler and Tanzi’s ne’er-do-well husband.

It’s unclear whether Tanzi is truly standing up for a woman’s right to engage in a traditionally male workplace or whether she’s simply trying to get back at her pushy parents and one-sidedly jerk of a husband — and that’s a good thing. This play does not present itself as a manifesto, but has its sights set more steadily on entertainment.

Showing a wonderful knack for attaching a gimmicky-stipulation to the final match between Tanzi and Rebel, Luckham forces the loser of the match to become “the housewife” of the relationship, quit wrestling and support their partner. If we were truly witnessing a portrait of feminist ideals, it’s unlikely that Tanzi would even accept any potential outcome with her marriage to Rebel intact, but would be prepared to strike out on her own as any human should be able.

However, that’s probably all a little more complicated than Trafford Tanzi is supposed to be. The play is light on story and character and heavy on the structure and novelty of wrestling: dividing the story into 10 “rounds” with each segment typically pairing the characters of the play against one another in half-verbal, half-Greco Roman debate and hostility. The characters are clearly identified as heroes and villains — perhaps even too clearly identified. Of course, the play’s very nature is to exist as both a theatrical story and a wrestling performance, and the simplistic characterization is a good example of this double-standard: what would be considered to be a one-dimensional character in a play is simply meeting the audience’s expectations in a wrestling match. 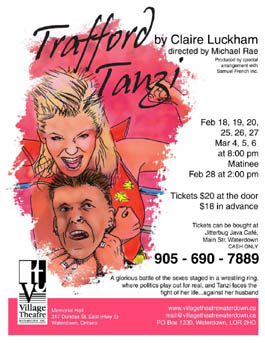 The poster for the Waterdown performance

The performers at The Village Theatre, as directed by Michael Rae and produced by Laura MacKay, were also seemingly aware of the play’s inherent strengths and weaknesses. If character and story are flimsy and the gimmicks are strong, then the production certainly played up the strengths for all they were worth. If you were arriving close to the start time, then your first clue suggesting you weren’t in for just another night in a small-town theatre was probably not the wrestling ring set up in the middle of the theatre in place of seats. Instead, it was likely the pounding sound of the show’s warm-up act: “Science Ninja Big Ten Band” – and that was heard from the outside.

Inside, it got louder.

That set the tone for the relentless pace of the show. With riffs from the band acting as entrance themes for each character as they made their way to the ring, a modest but effectively used lights display, rock songs interspersed with the actors’ dialogue, and not to mention the loud and sometimes solid bumps taken by the actors, frankly, you’re given the kind of non-stop performance that would have the Grinch grit his teeth and complain about all the noise, noise, noise.

And while putting on a “rock and wrestling” extravaganza was absolutely part of the appeal of the Village Theatre show, it wasn’t always clear that the audience was ready for it. The characters spoke out of turn at time, often directly towards an audience member, and encouraged those watching the play to shout out for their favourites, boo the heels, and sing along. This “Pantomime” tradition of performing takes some encouragement, as most of us remember the golden rule from our school field trips to see a live show: “be quiet.”

Therefore, to create the right mindset for what was to come, the production took the extra measure of opening the night with a wrestling match, which was presented without any connection to the play. Rip Impact (David Savelli) led the match, featuring himself and his partner Luis Aveiro against “The Entourage” Ethan Page and Joey Kings, and the crowd was given a refreshingly well-paced contest that let them grow accustomed to seeing issues resolved through knife-edges and piledrivers so that it wouldn’t seem so out of place for Tanzi and Rebel to settle things in similar fashion.

Savelli was actually performing only one of his roles on this evening, as his primary contribution to the play remained tangibly invisible. Along with his mentor Ernie Moore and also Ron Logue, both renowned wrestlers of the Hamilton scene, Savelli helped to integrate wrestling into the actors’ performances. With the exception of one actor, who had engaged briefly in a wrestling career until an injury forced her out, none of the actors had any experience in the ring and were, as Logue put it, “as green as could be.” He stressed that the primary concern for all involved was to train the actors to avoid injury. 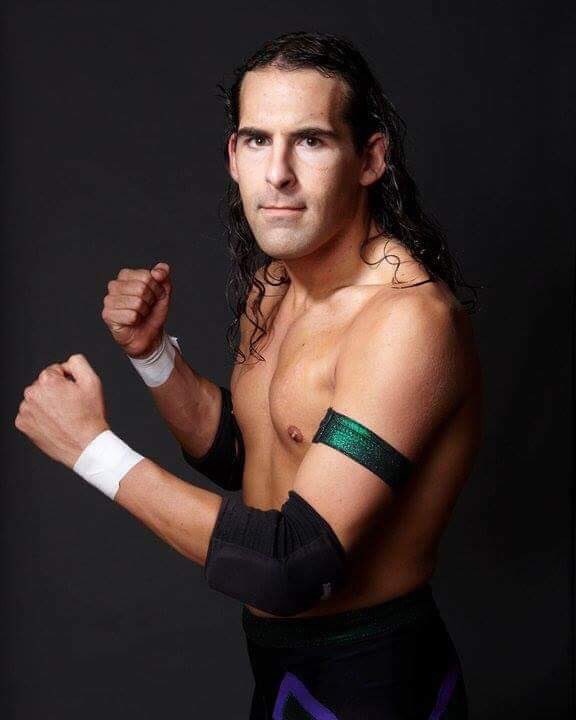 Rae considers bringing in Logue and Moore as trainers to be integral to the success of the play that he has been mulling over the best way to bring to life since 2005. While he had made preliminary queries to local judo trainers to help teach the actors how to move, it was a chance reading of the Hamilton Spectator that led him to the former “Phantom” and “Executioner,” and he credits them and Savelli with teaching the actors how to connect with the crowd on perhaps a more visceral level than either the performers or the audience is accustomed.

Despite the lack of depth to the material, not one of the members of the entire production laid back and coasted during the evening’s engagement — and that made up for what was lacking to deliver an energetic delivery of a play that, three decades later, still stands out as a unique approach to storytelling. Theatre, feminism and wrestling have all evolved, but the play has enough timelessness embedded in its themes to preserve its relevance for a modern crowd.

The show that couldn’t make it past its opening performance on Broadway (featuring sometime-wrestling star Andy Kaufman in a role as the referee) successfully resurfaced in Waterdown, and there’s no reason to count against further productions popping up in unexpected places. If you ever get the chance to experience it, take it. It’s not great literature, but it’s great theatre.