LOS ANGELES – WrestleReunion 4 has come to a close. The hotel seems to be lacking an energy now that many of the talents have left to go home, and fans have slowly trickled out. One thing is for certain, this has been a memorable weekend.

“The weekend was fantastic, better than I could have ever imagined. Everyone seemed to be very happy with everything that happened. Things ran smoothly, I felt like everyone had a great time, including myself. I felt like I was 14 again it was wonderful,” said fan coordinator Amber Gertner after the event ended Sunday afternoon. “I had so many people come up and thank all of us for doing such a wonderful job, making it the best convention and wrestling experience they have ever had.” 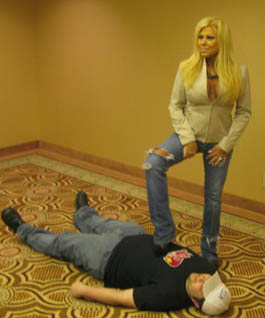 If you regularly read bylines on SLAM! Wrestling you may have noticed my name has been noticeable absent from stories. The truth is that I am not the fan I once was, between my life and the current TV offerings not much appeals to me which makes it hard to get motivated to write about it. While I can’t say WrestleReunion made me a fan again, it did remind me of what I loved in the first place and touched a part of me I wasn’t sure existed anymore. It doesn’t make me want to watch WWE and TNA every week, but it made me a convention fan. I’m still trying to wrap my head around everything from the event. Between the WrestleReunion stars, vendor guests, PWG and ROH lineup, and other visitors fans had the chance to interact with and meet over 60 wrestling personalities. Not just meet them but actually have one-on-one time to interact with them, get photos and autographs. The intimacy of the experience is what makes it special. 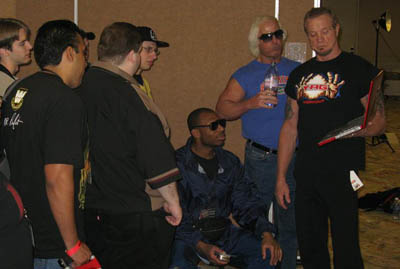 Sunday’s events started shortly after nine in the morning with the last photo ops of the weekend, with Austin Idol and “Diamond” Dallas Page. DDP made sure everyone heard about the YRG fitness system, even playing a video for fans on his laptop. Immediately after the second batch of guests signed, including Page, Idol, The Great Muta, Road Warrior Animal, Demolition, Terri Runnels and Tammy Sytch.

I’ve been lucky to help out Highspots at the event, primarily with doing photo ops. It’s been an interesting look behind the scenes and the time flew by quickly in watching people like Van Dam, Super Crazy, Page and Idol joke around between photos. I sat with Sytch and Runnels assisting with their autograph table which was an enjoyable two hours. While the superfan who had over 20 photos for Terri to sign was a little disturbing, the constant across table bickering between her and Animal was hysterical. 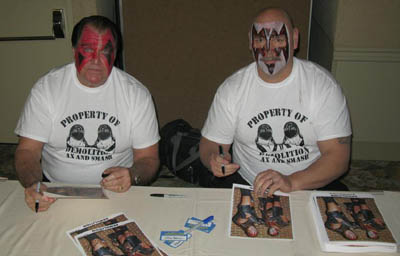 Demolition at their table.

The final event was the chance to cut a promo. I worked the Demolition and Animal room. As a fan of all three, it was surreal watching them cut promos live in front of me. Their ability to get the fans going was unquestionable, even the most timid fan soon found themselves screaming that they were going to destroy and crush their opponents alongside their new tag partners.

For many the biggest draw of the convention was Liger and Muta. Many of the fans in attendance were from the east coast and made it clear they came to see them. The thing that amazed me the most about them is their wrestling. Muta (47), Liger (45) and Jerry Lynn (46) all more had incredible performances in their matches. Often when older legends wrestle, they do as little as possible, but these guys were exact opposites and it was much appreciated.

It was a huge weekend for ROH and PWG as well, combined drawing almost 2,000 people and new exposure. If you were not in L.A., make sure you get a copy of the DVD of the shows. It is well worth it and may make you a fan.

Compared to the slick corporate production of WrestleMania weekend, this makes you feel much closer to the stars. While things went seamlessly, it was a long road to get to the weekend, said Gertner. “We probably started about four months ago when tickets went on sale. I am sure I spent a good 3-5 hours every day on just WrestleReunion in addition to my regular duties at Highspots. We were blessed in that we had a lot of volunteers from all over the country that came in to help. It was a lot to put together, but it was a labor of love, it really was.”

It was an expensive one as well, overall costing thousands of dollars. The event did not break even, but that was not the point, Gertner said. Instead the hope is that when people go home and tell their friends “you missed an amazing event, you need to go when it happens again” that it will continue to grow. You can start saving your money now, because Gertner assures us that there will be another one.

“We are coming back next year and are very excited. Look for WrestleReunion 5 next year in L.A.”

I’m planning to be there, and from the huge smiles on everyone’s faces, I won’t be alone.

Jason Clevett is thankful to everyone at Highspots and WrestleReunion as well as the talent and fans for their hospitality and generosity. He would also like to thank Mike Lano, Christine Coons and Mike Johnson for being familiar faces (or voices) and helping guide him through his first convention.