Jim White, who wrestled through the American south during the 1960s and 1970s and was a championship tag team wrestler with Jerry Lawler, died Thursday night from cancer. He was 67.

Born in Rogersville, Tennessee on July 11, 1942, White learned to wrestle amateur in high school. He was a regular at the professional wrestling matches in Knoxville and Kingsport. 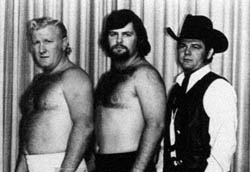 While on summer vacation in Chicago while his father worked a temporary job, White met wrestler Johnny Thunder (Johnny Brewer), who, after hearing about White’s love for the business, began teaching him a few moves and invited him to meet Billy Goelz, who was the booker for the Chicago promoter Fred Kohler.

White debuted at the age of 17 — his father had signed a consent form — against Johnny Kace in July 1959.

Back home, Goelz had spoken highly of White’s talent to Nashville promoter Nick Gulas, so Gulas began using the high schooler on weekends and in nearby spot shows. He used the name Tiny York, which stuck off and on through the 1960s.

“I had to be careful,” White told Scott Teal’s Whatever Happened To …? newsletter in 1995,” because I was still playing high school football. The football coach got wind of it and warned me that if they found out that I was wrestling, they’d make me quit playing football.”

After graduating, he began wrestling full time. His first big break came in eastern Tennessee, teaming with Ron Wright, with Ron Bass as their manager. Spreading his wings, White would head to Charlotte, Georgia, Florida, and Alabama for further schooling. He briefly worked under a mask as The Medic.

In 1970, a new promotion in Montgomery, Alabama run by Bill Golden opened up with White as one of the young up-and-comers, which included Golden’s son Jimmy Golden and Jerry Lawler. In Montgomery, White worked under a mask, teaming with Roy Klein, as The Green Shadows. Unmasked, they were known as Woodrow and Roy Bass, and Sam Bass served as their manager. In 1972, White would work as The Green Shadow in Nashville as a singles wrestler as well, with Dr. Ken Ramey as his manager.

But it’s White’s team with Lawler for which he is perhaps best known.

“You get some guys you have a real chemistry with in a tag team. Jim White and I were like Abbott and Costello. Jim was the straight man and perfectly happy doing it. I was Lou. I got to do all the goofy and crazy stuff and the interviews. But Jim did all the hard work. That worked for us as a team,” Lawler wrote in his autobiography, It’s Good to Be the King … Sometimes.

They began a team that others wanted to work with, wrote Lawler. “The majority of our matches we would be selling our opponents to the crowd. That was our specialty.”

“Jim was a real nice man and a great worker. I had a lot of good matches with him,” said Len Rossi. “He had real good ring psychology, for one thing, took great bumps. Psychologically, he was really good at working with the crowd.”

Lawler and White were the Southern Tag Team champions in 1973 in Tennessee, with Sam Bass as their manager. They went their separate ways in 1974, with White heading off to Charlotte, and then the Gulf Coast territory, where he was U.S tag team champions with Steve Lawler (Steve Kyle).

White continued to wrestle in the 1970s, and by the ’80s, was only working occasionally. His last bout was in 1985, the pain in his hips forcing him to retire.

In Morristown, Tennessee, he bought a van, camping supplies, a rod and reel, and began fishing and camping. In 1987, he took a job transporting alcohol and drug patients to rehabilitation centres. He later became the general manager of Alono, Inc., a non-profit corporation that treated people for drug and alcohol abuse.

White and his wife Barbara had two sons, Jeff and Tommy.

The viewing will be Sunday night from 6-9 at the Britton Funeral Home in Manchester, Kentucky. The funeral will be Monday at 11:00.

— with files from Scott Teal’s Whatever Happened To …? newsletter

Greg Oliver and his wife, Meredith, met Jim White at the 2001 Cauliflower Alley Club in Las Vegas. It was an unique experience for two just-married Canadians to sit with a bunch of legends from the South who had never ventured North. Greg can be emailed at [email protected].