He had been at a Christmas party, where everyone was racing go-karts, and after getting out of his go-kart, he took a few steps and collapsed. Evans was pronounced dead at Brampton Civic Hospital. 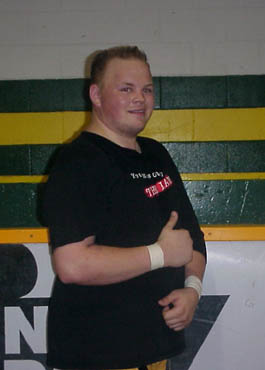 Damien Evans during his time as Damien Truth. Photo by Mark Hinkley.

For the last few years, Evans worked for the Toronto Argonauts in the community relations department. Almost a month ago, Evans had gotten engaged to Chiara Salvatore of Hamilton.

Matt Young knew Evans since they were 13 years old. “We met playing baseball. We later ended up working together,” Young said. “We had a common bond over wrestling, among other things … we were both pretty big fans and one thing led to another.”

Young would get involved in the professional wrestling scene in Ontario as a referee, among other duties, while Evans would train at Bob Woods’ EWF gym in Burlington. He was 19 or 20 years old at the time.

At 6-foot-1, and 250 to 260 pounds, Evans had some decent size for the indy scene, but according to Young, was never dedicated enough to go to the gym all the time.

“He never was a full-timer or anything like that. It was something he did to see what would happen, have some fun, see where he could go with it,” said Young.

As Damien Truth, he worked for promotions like Powerslam Wrestling Extreme and the EWF, competing in venues not too far from his Orangeville home, such as Mount Forest and Alliston.

“He was almost too nice to be in the business,” said Mike Van Etten, who wrestled with Evans under the monicker Mike Van Tastic.

Van Etten has often told the tale of working against Evans in Stoney Creek. Evans approached him, saying that he wanted to do something special that night — a plancha over the top rope. “He did it, but he caught his foot on the top rope,” recalled Van Ettan. “His other foot spun around. I tried to protect myself and he knocked me out.”

Young was there that night. “A guy that size probably shouldn’t be trying that,” he said of his late friend. 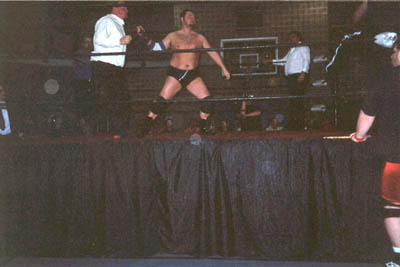 Though Evans enjoyed his time in the business — in particular the road trips, said Young — he had put it behind him. Scheduled to be Evans’ best man at his wedding, Young had been instructed not to bring up the short dalliance in professional wrestling.

“He had a lot of fun. He definitely enjoyed his time in the wrestling business,” said Young. “It just wouldn’t work long-term.”

He is survived by his fiancé Chiara Salvatore, his parents Diane & Tony of Orangeville; grandmother Colette Graham; and brother Chris.