I recently had a chance to review Smackdown vs. Raw 2010 for the Nintendo DS and I have to say that THQ has outdone any other previous portable versions. Many times portable versions lack some fun or critical features that the consoles have but this one isn’t lacking a thing!

It’s full of features including Create-A-Wrestler, all the major WWE brands and almost every type of match. There are eight in all. My favorites are cage matches and ambulance matches. They look terrific. The graphics are top notch and the shadowing that the DS is able to pull off is quite good. 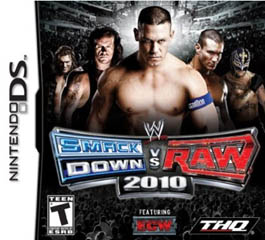 Now I’m not a big fan of story mode but I have to say that it adds a lot more playability and you can with match cards (in that mode), which enables gamers to grant a one-time special ability in a match, or it can unlock new moves and new venues. That’s pretty cool and gamers can use up to three while your grappler makes his big entrance. And they are spectacular even on the small screen!

The wrestlers are CGI’d to perfection except for Finlay. He looks sad even before he gets into the ring? Why? Mr. Kennedy is in this game and that’s become a new trend in WWE games. Guys get canned before the game comes out and yet their “trademarked” names and likenesses live on. I have a version of Wrestlemania the Arcade Game for the PC circa 1995! Guess who’s on the cover — Shawn Michaels and he’s still in the game. To me that’s amazing!

I love the crowd noise and ring sounds in this game and as far as game play you can’t just kick and punch your way through your match. You have to use combinations and that adds a lot more realism to the game.

The game has a lot of replayability and for that reason along it’s worth purchasing. Any wrestling fan would flip over it and I think most gamers would be extremely satisfied as well.