BY MATT MACKINDER AND RYAN NATION

In this tag team review of WWE’s latest DVD exhibiting how Vince McMahon has shown time and time again that money conquers all, Matt Mackinder and Ryan Nation will discuss what each liked in the DVD, what they didn’t like, what was missed and how they would have produced it differently.

Matt’s comments will be italicized, while Ryan’s will be in normal font.

The documentary kicks into gear with Jim and David Crockett discussing their father, Jim Crockett, Sr., and his role as a promoter in the Carolina area.

I liked this intro because a great many of today’s fans have no clue about the history of the NWA, WCW, or Jim Crockett.

A very sincere Vince McMahon also discusses the relationship between his father, Vince McMahon Sr., and Jim Crockett Sr., who were both a part of the National Wrestling Alliance. McMahon always lights up when discussing his dad, which is nice to see the human side of Vince as opposed to the character of Mr. McMahon viewers are accustomed to.

Jim and David Crockett proceed to recount the history of Mid-Atlantic Championship Wrestling and Jim Crocket Promotions, along with input from others such as Ric Flair and Dusty Rhodes. The history of Georgia Championship Wrestling is glossed over. The Crocketts and McMahon discuss Black Saturday, however, the notable absence of both Jerry and Jack Brisco is somewhat bewildering considering they were both minority owners of GCW.

Bewildering? Yes. I’m actually surprised Triple H didn’t get interviewed here. The early years get skimmed over because of two reasons — fans nowadays only know WWE and have only read about WCW and NWA on message boards.

After detailing the sale of JCP to Turner Broadcasting, World Championship Wrestling is born — along with the cavalcade of upper management.

One noticeable drawback is the absence of input from individuals who played pivotal roles during the glory days of WCW. For example, WWE taps into archived footage for comments from Eric Bischoff, Hulk Hogan and Scott Hall, among others. However, there are a few surprises, such as the inclusion of former Turner Sports president Dr. Harvey Schiller.

It would have been cool to see Sting interviewed, but we all know why that was pretty much impossible.

The importance of Hogan’s heel turn and the formation of the NWO are discussed, but there are no groundbreaking revelations since again, mostly older interviews are utilized.

Bill Goldberg’s participation is a high point within the DVD. Goldberg comes across very humble by giving credit to “The Sarge” Dwayne Bruce, who helped train him at the WCW Power Plant, and Hugh Morrus (Bill DeMott) — Goldberg’s opponent in his debut match on Monday Nitro.

Although Bischoff declined to participate in the DVD, he is depicted in a mostly positive light, although the same can not be said about the portrayal of Vince Russo. Whereas one can easily understand why WWE would not approach Russo for his involvement given his current role in TNA, this portion comes across as extremely one-sided as result. While Russo is seemingly buried, former WWE writer Ed Ferrara — who made the jump with Russo in 1999 to WCW — apparently never existed, as his name is not mentioned at all.

Ferrara and Chris Benoit must be on the same list.

SLAM! Wrestling was able to confirm Ferrara was not contacted to participate in the documentary. Ironically, Ferrara returned to TNA in September to be a part of the creative team with Russo after several years away from wrestling. 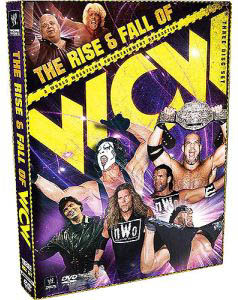 The merger of AOL and Time Warner is credited with ringing the death knell for WCW, although oddly enough, Jamie Kellner, former Turner Broadcasting chairman and CEO at the time WCW folded, is never even referenced.

A big hole here, indeed. The viewer seems to see that as the documentary goes on that the WWE (WWF) takeover of WCW was all business, as we knew, but we really get many of the specifics, but not all.

Dr. Schiller gives the poignant last words summarizing WCW by stating, “Ted [Turner] loved wrestling even to this day. It was his idea to bring it, it was his idea to keep it and he would still love to have it.”

My biggest criticism is the lack of individuals interviewed for the project. For instance, Paul Heyman would have brought a unique perspective considering his prior involvement with WCW and WWE. Furthermore, a segment featuring the entire McMahon family discussing what it was like within WWE when WCW was on top would have been a great addition.

The Pillman-Liger match was epic. Nice choice, Ryan. Personally, I would have included a Benoit match or two, but we know that he’s non-existent these days in Vince’s eyes. And that’s a shame. The match from Souled Out 2000 where he won the WCW title from Sid Vicious could have been a catalyst to discussing WCW wrestlers migrating to WWE (then WWF).

Disc 1 (the documentary) also has special features attached, including pieces on Bill Watts, Spam Man, and Bischoff’s part in giving away the infamous Raw results where Mick Foley won the world title. Discs 2 and 3 are all matches (as listed below):

For all of the attention the documentary puts on the match between Goldberg and Hogan in 1998 at the Georgia Dome, you would think the match is necessary viewing, yet it is excluded. In fact, I read the match listing twice as I thought I had surely missed it the first time around.

My biggest compliment is the simple fact that WWE treated WCW as a whole with a lot of respect when they could have easily pigeonholed the success of WCW as a fluke.

Overall, this DVD set reminded me just how important competition is — and just how much it is missed.

I couldn’t have said it better myself.

Match listing for The Rise & Fall of WCW

Matt Mackinder liked it better when it was the N Dubbya A.

Ryan Nation hopes WWE will consider releasing an anthology based on the history of WCW, or at least producing a similar endeavor for WWE Classics on Demand.