Having been a professional wrestling fan for over 20 years there has always been a part of me that wondered what it would be like to actually step into the squared circle. Most sports entertainment enthusiasts have of course pictured themselves main eventing WrestleMania, but what about the sensation of taking a bump or having a submission locked on inside the ring? Well last Sunday at the Squared Circle Wrestling Training Centre in Toronto I was able to experience first hand the training process to become a pro wrestler.

However, this was no ordinary training session. This was a fantasy camp hosted by TNA Knockout, and Squared Circle graduate, Shantelle Malawski, better known as Taylor Wilde. The co-holder of the TNA women’s tag team championship began the five-hour camp by rounding up the 18 nervous students, myself included, into the ring. Wilde immediately settled the nerves by telling stories of her career while leading the group through stretches and explaining the ground rules for the day. She cracked jokes and spoke of what an honour it was to be able to give back to the school that laid the groundwork for her current success. 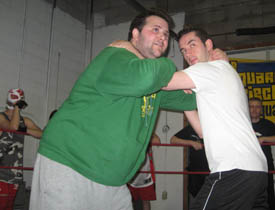 Then it came time to get started. I had tried to follow the classic advice of training, saying my prayers, and taking my vitamins in preparation, and wondered if my “Stone Cold” Steve Austin-style knee brace would hold up. First was a series of various front and back rolls to become familiar with the feel of the mat and moving about the ring. Wilde did an amazing job of demonstrating each technique in detail and ensuring that every person operated within their comfort zone.

The pace was kept quick with learning how to leap over the top rope into the ring and diving through the middle rope from the apron coming next (I am still amazed that I made it over the top rope). Head trainer of Squared Circle, Steve Cvjetkovich, chimed in occasionally with some words of wisdom, especially on the section that followed — how to take a bump.

Well ladies and gentleman, let me tell you that when wrestlers say that hitting the mat hurts, they are right. There is some give, but not enough, and luckily Taylor Wilde was there to show us newcomers how it is done. We started taking back bumps from a squatting and then standing position where keeping your chin tucked is key; otherwise you end up with a throbbing skull like yours truly.

A nice surprise on the afternoon was when another TNA Knockout, Madison Rayne of The Beautiful People, showed up to chat, take pictures, and sign some autographs.

SLAM! Wrestling’s own Bob Kapur and Z103.5 morning show co-host Dave Blezard are the broadcast team for local indy wrestling promotion BSE Pro Wrestling and were on hand to give advice on cutting an effective promo. The group was told to take a few minutes and put together a brief interview to share with everyone. Naturally many involved were shaking in their proverbial boots at the thought of presenting and while some material was definitely “interesting” all in all it was well done. I partnered up with a talented pair of bright-eyed hopefuls named Iskander “Spyder” Abubaken and Anthony “The Mail Man” Giu to deliver our show-stopping promo. 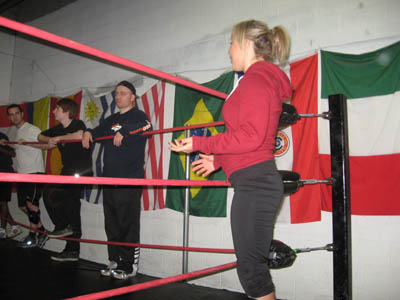 The attendees’ excitement got kicked up a notch when we were told to team up and learn some basic manoeuvres. It amazed me how intricate a hold as seemingly simple as a collar and elbow tie up was to execute properly. Wilde showed endless patience guiding students while we stumbled our way along through schoolboy roll-ups, applying a Boston crab, and the extremely tricky inverted figure four. Being exposed to these few moves, never mind the years it takes to perfect them, gave me a new appreciation for how hard professional wrestlers work at their craft.

Following the workout, the tired, but happy participants were treated to several matches from BSE Pro Wrestling stars. Squared Circle Wrestling Training Centre is the breeding ground for BSE and no doubt these performers were getting ready for their Xtreme Xmas 2009 show, which takes place December 5 at Brampton’s Terry Miller Recreation Center.

Suddenly it was 5:30 p.m., and just like that the fantasy camp was over. Taylor Wilde made sure to take extra time to sign photos, pose for pictures, and interact one on one with whoever asked. All the students were buzzing on the way out as they spoke about possibly attending the school; however, I will take this chance to officially announce my retirement from the ring after a stellar one-day career.

Squared Circle put on a first class event, and guest trainer Taylor Wilde made it a day that this SLAM! Wrestling reporter will never forget.