New TNA theme CD Emergence one to have

While wrestling on TV these days — WWE or TNA — may not be anything to brag about, the wrestler’s theme music has never been better.

TNA released their latest theme CD recently, Emergence, and like all of TNA’s previous releases, it’s one to definitely have in your collection. 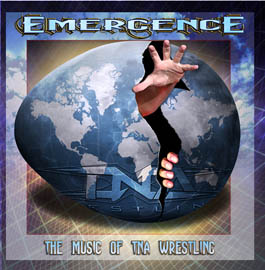 Following 3rd Degree Burns and Meltdown, TNA’s latest theme CD keeps with the trend of being a top-notch production.

Theme songs are part of a wrestler’s gimmick and when those first bars of their music hit during a particular show, the viewer instantly knows who’s coming out. TNA music guru Dale Oliver is perfect in making those first notes of a theme fit the wrestler to a ‘T.’

TNA has added some new wrestler’s themes to Emergence, including Bobby Lashley , Mick Foley, Suicide, D’Angelo Dinero, The Beautiful People, Tara and The British Invasion. With the disbanding of LAX, Hernandez’s new single theme is also included in this set, as is Beer Money’s entrance tune.

The TNA theme, “Cross The Line,” starts off the CD and it’s the only way, really, to start a theme song disc.

WWE goes all-out and has now recruited established artists (see Nickelback, Papa Roach on Raw) to perform their themes. That’s not saying that TNA doesn’t go all-out, but the resources WWE has seem to be unlimited.

That said, Dale Oliver has my respect as he basically is a one-man show when it comes to creating, recording and producing TNA’s themes. WWE seemingly buys their respect.

There are themes that were not included, however, and perhaps this may be a sign of an Anthology-type compilation in the future. Missing themes this reviewer would have included are Booker T, Sheik Abdul Bashir, Curry Man, and for that matter, Daniels, Eric Young/Super Eric and perhaps A.J. Styles.

When all is said (heard) and done, picking up Emergence is a solid choice for theme music buffs, such as yours truly. The disc is only 14 tracks long and just a hair over 30 minutes long, but it’s a guarantee those 30 minutes will be time you’ll want to live over and over again.