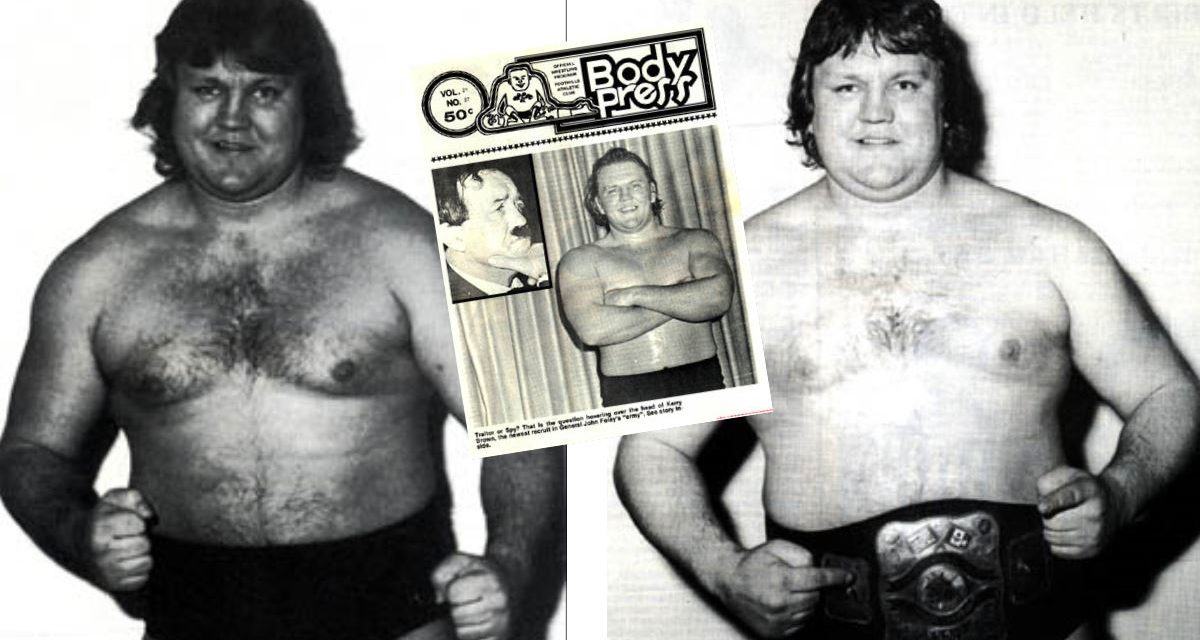 WINNIPEG — It was a night of memories and old school wrestling as family, wrestlers, and fans came together at an all-ages tribute show for the late “Pitbull” Kerry Brown two months after his passing.

Brown’s mother, Bernice Martens, was in attendance at the Skyview Ballroom at the Marlborough Hotel, along with her husband Jake, sister Joan and her husband Jack Collins. 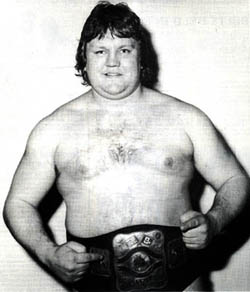 “I knew he wasn’t well. We met a couple weeks before [his death] for lunch. He wasn’t feeling up to par,” Bernice told SLAM! Wrestling, noting Brown, who normally had a good appetite, did not eat much that afternoon. “As a mom, I wanted to take him back home and fix things. But he was feeling all grown up, and said, ‘Mom, I’m 51, I can take care of myself. I can manage.'”

Two weeks and a day later, he was gone, felled by liver failure.

His aunt Joan remembered a different Kerry Brown from the one people saw in the ring, calling him a “super nice, sweet fellow,” who loved coming over to cook at his mom’s.

Bernice considered her son “very tenderhearted,” and thought back to when his infant son Kerry James Jr.’s life was cut short after only six months.

“When Kerry phoned me and I went to the funeral, he was the most brokenhearted man I’ve ever seen in my life. And Kerry never got over it.”

Brown had two other sons with the same girlfriend, but a breakup prevented him from getting as close to them as he would have liked. 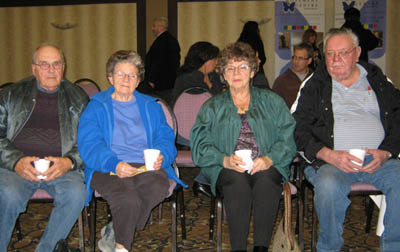 Kerry’s mom Bernice in green; to her left, sister Joan and husband Jack Collins. Bernice’s husband Jake sits next to her. Photos by Richard Kamchen.

Promoter Tony Condello, after clearing the ring of a crazed “Outlaw” Adam Knight with a baseball bat, took the microphone and spoke to the 250-300 fans assembled about a young “Pitbull” he trained in the mid-1970s. Brown was a quick study — after one year, Condello got a call from Bob Geigel in Kansas City asking if Brown was ready. And he was. But there were also times when Brown could get under Condello’s skin, although Condello insisted he always quickly forgave him.

“Sometimes I’d get mad at the guy, but I could not stay mad with him more than a half hour. He was a great, great guy in my books. I was sorry to see him go so soon,” Condello said, and later added: “The stars belong to the sky, and that’s where I believe he is.” 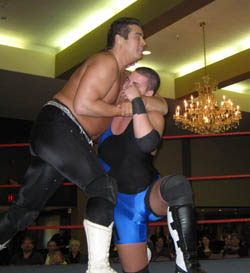 Out of all the wrestlers here, Chi Chi Cruz probably knew Brown the best, first meeting up with him in Winnipeg back in 1989.

“I was just a kid and there were these big stars — international — so, I was quite intimidated,” Cruz said backstage. “I expected to be torn apart, but they were true professionals, they made me look good, they took me under their wing, and I learned a lot from the Browns, Bob and Kerry, all along. And there’s no words that I can say to express the gratitude I feel towards them. Neither of them are here any more, and that makes me sad.”

Cruz and Brown would go on to build both a professional and personal relationship as the years went by, and being on the show was hugely important for Cruz.

“There’s no way anybody’s going to leave me off the show. I had to come and pay my tribute to Kerry… He was a true friend in and out of the ring, and one of the greatest guys I’ve ever known.” 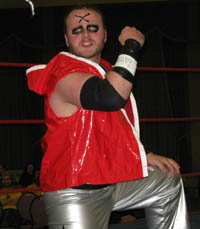 Rob Stardom, also on the card, knew Brown for about five years and recalled taking him on in a number of hardcore contests, including barbed wire and cage matches. But Brown gave him more than just bumps and scrapes, spending time with Stardom and talking to him while they were on the road.

Pre-show preparations altered from the norm, he said, as the guys congregated and spoke about Brown over beers. Stardom, following his loss to Matt Fairlane, limped past Bernice and could be heard whispering, “He was like a dad to me.” At the conclusion of the main event battle royal, Stardom again went over to Bernice and spoke with her. 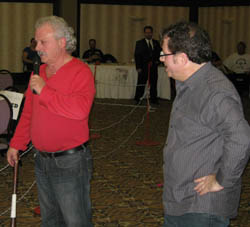 Tony Condello addresses the crowd as Marty Goldstein listens in.

The show came as advertised — old school and for the family. Promo time was limited, not one drop of blood was spilled, and the fans had a good time. It was a night of celebration, of both Brown’s life and the style of wrestling he epitomized. But the mood was decidedly somber too.

“It was a very respectful crowd,” said Cruz. “It was obvious right from the get-go it wasn’t going to be a crowd screaming and going crazy. It was a crowd that was here to pay respects to Kerry Brown, which makes it a little tough in the ring, but I think all the guys realized that, and still put out their best efforts with a quieter than maybe normal crowd, but a very appreciative crowd nonetheless. It was an honour and a joy to be in the ring tonight.”

Condello said the Winnipeg wrestling community was asked to put aside its differences and join together to put on a show, and for one night at least, old rivalries were cooled.

“It’s nice to see an event like this where all the guys come together and work like a unit, and put everything aside, like personal issues, and put on a great show in memory of one of the greatest stars Canada’s ever produced,” Cruz said. 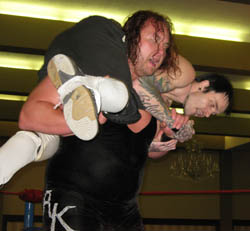 Adam Knight with Nate Hardy on his shoulders.

The event started off with a “Procession of Honour Guard,” with all the wrestlers in the back coming out and circling the ring to pay their respects. A 10-bell salute was followed by a video tribute to Brown.

Some of the highlights included Premier Championship Wrestling’s Canadian Champion Adam Knight demolishing his opponents Scott Justice and Nate Hardy in an open challenge. He dared anyone, including a SLAM! Wrestling reporter standing ringside, to face him, and took out the referee before Condello entered the ring armed with a bat that sent the “Outlaw” running for cover. 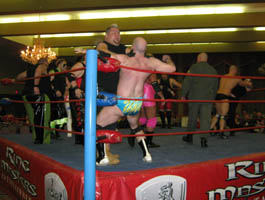 The smash-mouth Kerry Brown Memorial Rumble saw Hardy fly high out of the ring and crash down hard onto the floor, Royce suicide diving over the top rope onto his (one presumes his now ex-) partner ATM, “Beautiful” Bobby Jay stink-facing someone in the corner, and the underdog La Sombra outlasting his much larger foes after upsetting Knight for the duke.

Bernice admitted she never went to see Brown wrestle live, fearing for his well-being in his rough-and-tumble matches.

“I just couldn’t, even when he was in Winnipeg.”

But sitting front row and so near the type of ring Brown used to ply his trade in for all those years, her feelings shifted from ones of trepidation to gratitude.

“It thrills me to see all these people here to honour Kerry.”