Best of Smackdown DVD has all the hits

Though it may not seem like it sometimes from my show reports, Smackdown has long been and continues to be my favourite wrestling show. Between what I consider to be the best in-ring talent on any roster and a great blend of long matches and to-the-point promos, SD! has, more than Raw, Impact, Nitro or any other show that has flashed across my TV screen in the last decade, entertained me and kept me liking the wrestling business. 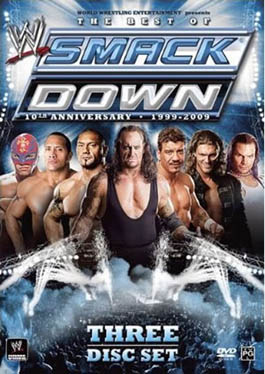 So you can imagine my excitement when I first heard, a few months back, about the new DVD release, The Best of Smackdown. Packed with highlights and matches, The Best of Smackdown is, perhaps surprisingly, a better compilation than the similar tribute DVD that came out a couple years ago for WWE Raw.

Narrated by Michael Cole and Matt Striker, The Best of Smackdown takes viewers through the top 100 moments and bouts in the show’s decade-long history. Mixed in is insight from some of WWE’s personalities, including CM Punk, John Cena and Michael Hayes. Most of the moments are shown in their entirety with commentary surrounding them and the matches are done with intros by Cole and Striker, while others are clipped. Some of these are expected, like the Iron Man match between Kurt Angle and Brock Lesnar (though I hope that bout eventually will make it to WWE DVD in its entirety), but admittedly there are a couple disappointingly chopped, like the parking lot brawl between John Cena and Eddie Geuerrero.

I’m giving this compilation a thumbs up because WWE produced this properly. It wasn’t a clip job or a mash-up like some of the specials you see on StarTV — this was a full out tribute to the late-week brand of wrestling.

Now that the formalities are out of the way, let’s talk about the list. Rather than complain about one segment being lower than another, I’d like to make a few observations:

Bearing all this in mind, as I said before, this DVD set is a definite must-own. The misses are far outweighed by the hits, and those hits are very well executed. Pick up The Best of Smackdown today!