It’s hard to say, at times, why sports genre gamers will pick up a new edition of their favourite sport year after year. After all, how much can change in the space of 12 months that can entice a console owner to plunk down enough dough that would cover one or two tickets to a game?

The answer lies in the developments that roll in year after year, and in the case of Smackdown vs. Raw 2010, the new features are both new and old school. 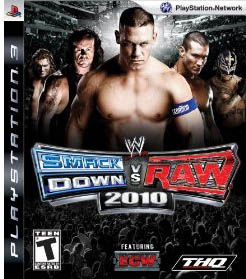 Consider, first, a feature that may seem simplistic to some but a godsend to others — costume manipulation. Long-time fans of WWE games who played Nintendo 64 titles from THQ will remember that this feature was standard in games like WrestleMania 2000 and No Mercy; but the ability to change a wrestler’s garb to either stay with changes as they came or go retro was a really cool part of the titles, but the feature, up until now, was not available on the SVR series, which began on Playstation 2.

Cory Ledesma, creative director at THQ, has already been receiving positive feedback on the new feature, and looks forward to seeing what gamers will show off. “Fans have already gotten really excited about customizing their own WWE Superstars outfits,” he told SLAM! Wrestling. “We know our WWE fans are some of the most creative people around, so I’m expecting big things out of this mode as well as all the content they are going to post online.”

The online segment of SVR ‘10 will undoubtedly be a favourite feature of gamers, as it was in SVR ’09 and previous incarnations. Ledesma reports that gamers will be able to share their homemade aspects of the game, including storylines and maneuvers. in the Xbox 360 and Playstation 3 versions of the game. Most prominent of the creation features is the create-a-wrestler mode, which has been a staple of THQ dating back to its days of making games for WCW. The online sharing could mean a boon for SVR fans who will regularly share create-a-wrestler tips for making wrestlers (and some celebrities) that aren’t included in the game, be they from WWE’s past, present and future, or from other leagues.

To help gamers be able to make these wrestlers, THQ’s staff regularly include moves in the create-a-wrestler mode that aren’t in the movesets of the built-in roster. A lot of time and effort goes into bulking up this feature, as Ledesma explains, both in their own creativity and from the WWE roster. 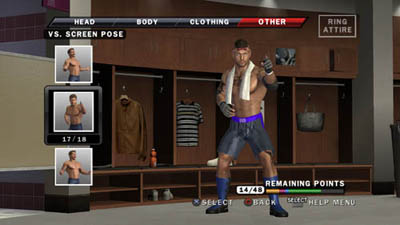 Create-a-Wrestler returns for Smackdown vs. Raw 2010.

“The challenge of coming up with new moves and animations that aren’t used by WWE Superstars is really most of the fun in designing this mode. The game designers did indeed do a lot of research to find some inspiring moves from the past and present,” Ledesma said. “We also ask our WWE talent at the motion capture studios to try out some new moves and give us some suggestions. Some of the best high-flyers, like Evan Bourne, gave us a lot of great ideas and input during the motion capture shoots.”

It is in these motion capture shoots that THQ’s games excel the most. After all, these features would be meaningless if the game’s presentation was poor. Perhaps more so than at any point in video game history, players are looking for the most realistic gaming experience possible. Okay, they’re not looking to take a Tombstone by any stretch of the imagination, but they are, however, wanting near life-like graphics, picture-perfect move replication and the total feel of being inside a WWE arena. 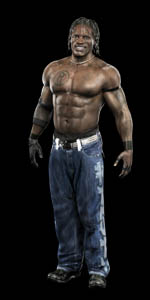 The result of R-Truth’s body scan for Smackdown vs. Raw 2010.

To help accomplish this gargantuan feat, THQ brings in WWE’s best and brightest for body scans and motion captures. Smackdown superstar R-Truth was one of the wrestlers that took part in this unique part of the game development and was excited about the opportunity to do so.

“I had the chance to go down and do my own entrance, my corkscrew elbow, my actions … Those guys put in a lot of work,” R-Truth told SLAM! Wrestling. “My hat goes off to the guys behind the scenes that put the video games together.”

Other features, both returning and new, that fans can look forward to are new storylines, characters that can be unlocked as the game is played and new match types for the Nintendo DS system, including the ambulance match.

With these features in place, there’s little doubt that Smackdown vs. Raw 2010 will gain a large audience coming off the success of SVR ’09. The challenge of bettering the previous year’s effort is one that Ledemsa and the rest of the THQ staff look forward to every year, building on success year-in and year-out.

“Our main goal is to deliver the next best WWE game each year. The process of working on a franchise each year has its challenges, but one of its advantages is that we can build on the great effort from the previous year,” he said. “We can keep all of the modes, moves and content that was well received the year before, polish the content that might not have scored as high and then introduce more content to get the fans even more excited about the next game. We feel as if we are building the ultimate WWE experience each year and that it’s only getting better and better.”