TNA Wrestling’s Robert Roode is primed and ready for this Sunday’s huge Bound For Glory pay-per-view. Roode, along with Beer Money Inc. partner James Storm, will compete not only to recapture the TNA tag team straps, but also the prestigious IWGP tag titles from the New Japan promotion.

Roode sat down with SLAM! Wrestling and explained his feelings on Beer Money Inc.’s Full Metal Mayhem match and the chance to wear dual tag team gold. “We are very happy to be going for those belts and to be in there with such great teams like Angle/Booker and Team 3-D,” he said. “The Japan championships have such a rich history and adds a lot of legitimacy to TNA.” 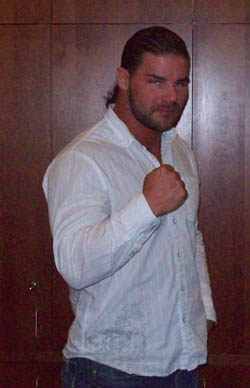 Now in his fifth year with TNA Wrestling, how did the dream begin for this Peterborough, Ontario native? Growing up Roode was an exceptional hockey and football player, but also a big professional wrestling fan. “I grew up watching Hogan and Savage as a kid. As I looked to get into the business I focused more on the likes of Curt Hennig, Rick Rude, and Ric Flair,” he reminisced. “I liked especially how Mr. Perfect combined psychology, athleticism, and charisma. That’s what I wanted to develop.”

His in-ring style has been compared to Hennig and Arn Anderson, a compliment Roode accepts with some hesitation. “It’s great to be mentioned with the likes of those legends, but I try to stay as original as possible”.

Roode had some prestigious assistance when breaking into the sports entertainment business. He is friends with fellow Canadian Sean Morley, better known to WWE followers as Val Venis, who trained Roode briefly in the basics before sending him off for further development with Shane Sewell. “Val gave me great guidance and then Shane taught me more of the core fundamentals. I trained for three months, picked things up real fast, then had my first match.”

He made his first official appearance in the squared circle in 1998; however, it was not until 2000 when the six-footer really hit his stride. “For the summers of 2000-2003 I did tours of the East Coast where I was wrestling seven days a week and really got to learn the business,” he explained. “The first tour was for Emile Dupre of Grand Prix Wrestling.”

By the end of 2003 Roode was becoming frustrated with his lack of overall progression and actually considered moving on from professional wrestling. However, that all changed with a single phone call, “I was ready to hang up my boots, I was just spinning my wheels … then the call came from TNA.” Roode became a part of Scott D’Amore’s Team Canada where he was dominant as the powerhouse Canadian Enforcer.

SLAM! Wrestling asked Roode how it felt to have legendary Booker T’s first feud in TNA to be with him. “Booker actually asked to work with me so it was quite an honour. We worked with each other for six months, and he was a pro in and out of the ring.”

He continued, “I learned and continue to learn a lot from Booker, he’s easy to talk to and treats everyone in the dressing room professionally.” Speaking of legends, Roode said that if it was possible to turn back the clock he would love the chance to go one-on-one with either Ric Flair or the late Curt Hennig. From the current TNA roster Roode is hoping to have the opportunity to lace up the boots in singles competition against Kurt Angle and world champion A.J. Styles. “Kurt and A.J. are such amazing talents, I think it would be fun to watch.”

Robert Roode discussed his character progression within TNA and how the company has developed as a whole since his arrival. “We are the fastest rising wrestling promotion of all time. Ratings are steadily going up and I’m apart of the hottest tag team today in Beer Money Inc.” 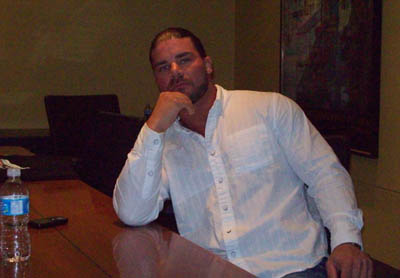 He did have some thoughts on how the success can develop further, “TNA needs to concentrate on building new stars, so that when the current high profile veterans leave, the fans still have someone to look up to.”

Looking ahead to Sunday’s Bound For Glory event, available on Viewer’s Choice Canada, Roode is extremely excited to be included in such a high profile tag match-up. “This is our Super Bowl, biggest night for the company, and every wrestler is psyched to get out there and perform,” he said. “If there is one pay-per-view not to miss it is definitely Bound For Glory.”

In closing, Roode stated that although singles championship gold is definitely a goal down the road, he is quite content where he is at. “I feel like I’m just hitting my prime now, and have a long career ahead of me.”