TORONTO — The Champ is the champ for a sixth time. And for John Cena, the sixth time as world champion in the WWE is far different than his first.

He defeated Randy Orton in an I Quit match at the Breaking Point pay-per-view in Montreal on September 13th, to claim the WWE Championship. Cena won his first world title in April 2005, and has held the WWE championship four times and the WWE World Heavyweight title twice. 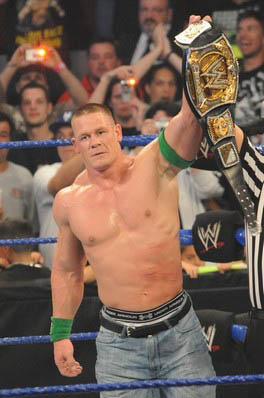 “When you win it for the first time, I think it’s the satisfaction that you finally did it. But then the very next day you realize, okay, it’s just starting.

“Now, having success for a sixth time, I know what’s in store, not only from a brand standpoint and what’s going to happen on WWE, I certainly will be in for some new challenges, but for instances such as this, I know my schedule will be completely full, just because of the fact that everybody wants to be able to interview the champ.”

In Toronto to pimp WWE sponsor Gillette and The Score’s new show, Drafted, Cena was asked to go back — way back — in time to 2003 when he had a Velocity match with Bryan Danielson, who was recently signed to a WWE deal and is expected to debut on the main show shortly, bypassing the company’s developmental territory in Florida. Also signed was another former Ring of Honor World champion, Nigel McGuinness.

Does the locker room talk about signings like Danielson and McGuinness?

“Certainly, if the locker room remembers that Velocity match a long time ago [see it on YouTube], they’re much more of the historian category than I am. We’re always happy to get any sort of talent. I think Bryan will be a wonderful acquisition for the program, as well as any of our developmental superstars,” Cena said, protecting the company’s investment in Florida Championship Wrestling.

“You’re seeing a lot of new faces on WWE programming,” he said, agreeing that it was refreshing to see. “It really is. It is about time for it, I’ll be the first to say. If we’re going to carry this wave of popularity into the next five, 10, 15 years, we need our young guys, our new faces, to step up now.”

Who is next for that level?

“It’s tough to say, and the good news is that the company is not clearly behind one person. They’re kind of spreading themselves out to see who works out. Between Miz, between Morrison, between Sheamus, between Cody Rhodes, Ted DiBiase, Kofi Kingston, there are so many guys that are getting a shot — finally. It’s just good to see a lot of people getting a shot at once rather than the company firmly backing one individual.”

Cena established a lot of his success on the Smackdown show, both pre-roster split and after.

The just-released Best of Smackdown DVD features Cena, and while he has fond memories of the show, he’s a company man to the end.

“All brands, I think the WWE, that’s our success, whether it’s ECW, whether it’s Smackdown, or whether it’s Raw — or even Superstars. You can’t take any of our programming for granted, because the ratings don’t lie. There are millions of people watching us every week, no matter if it’s Monday or it’s Friday or Tuesday or Thursday, it doesn’t matter. I’m actually very thrilled for Smackdown to not only have a Best of DVD come out, but its 10th anniversary, its 500th episode, I believe, is coming up.”