Cena sticks to the company line

TORONTO — John Cena has a way of turning questions about himself into an answer from his employer’s standpoint. From a company perspective, Cena is The Man — a stand-up representative that is respected, honest and true. Just don’t look for anything controversial.

And that’s not a complaint.

In an era when anybody can spout an opinion through their blog, phone or tattoos, Cena is a throwback.

He is who he is, without any apologies. 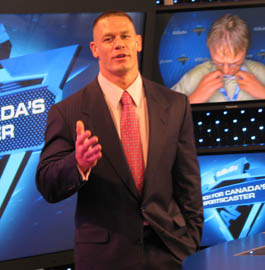 John Cena at the press conference for the new show Drafted on The Score. Photos by Greg Oliver.

“I’m lucky enough to kind of be myself, so if it was one of those things, let’s say playing a superhero on TV, and I’m really not that way in real life,” he told SLAM! Wrestling this past Thursday at the launch for the new show on The Score, Gillette Drafted. “My work ethic, my value system, everything is pretty much as is that you see on TV, that happens off camera. It’s pretty easy, it’s not too much of a stretch for me. If you meet me outside of this, I’m pretty much the same way as I am on television.”

What those lucky enough to be in attendance at the press conference saw was a relaxed John Cena — though dressed up significantly from his on-screen persona — having some fun, trying to read a sportscast script he was just handed.

The schtick mirrored Drafted, which at its core is American Idol, but with wannabe sportscasters. The Score set out across Canada to find the country’s “next best sportscaster.” The weekly show, airing on Mondays, is as much about the journey and the behind-the-scenes elements of sportscasting as it is the five finalists — out of 3,000 applicants.

Cena showed great poise while reading the impromptu script, and afterward, said that he’d, “always wanted to do that.”

He confessed it was hard to “try to keep the viewers’ attention” in his first-ever sportscast, with the pace he had to read at particularly difficult — not to mention the challenging names like Wally Szczerbiak (zer-bee-ak) and Christiano Ronaldo, who in the script was rumoured to be heading to Real (rea-al) Madrid. In a later colour commentator role alongside The Score’s CFO, Tom Hearne, who was in front of the camera for the first time, Cena really excelled, cracking wise and showing off a deep knowledge of sports.

But leave it to Cena to bring it back home to where his bread is buttered, albeit professionally and not in a over-the-top shill fashion.

“This show really brings to light how difficult it is to do, and how important the preparation is, looking your best,” he said, crediting the show’s title sponsor, Gillette, for its efforts in sports — and sports entertainment.

Gillette has been running the “Be A Superstar” campaign with WWE superstars Cena (talking about confidence), Chris Jericho (in character, riffing and bragging) and Cody Rhodes (alluding to shaving, well, “down there”).

Cena believes the link between Gillette and WWE was natural. “I think my personality, and the personality of a lot of the WWE superstars stands out, and that’s why we’ve gained such a following across the world. We know who we are, and that translates through our programming. I think who I am on television just kind of lined up with Gillette’s vision.”

Asked about pursuing other endorsements, Cena makes it about everything but himself. 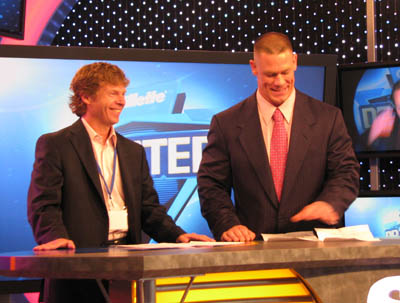 “It’s not about going out and getting endorsements, it’s about once you have them, establishing good relationships with quality partners. Gillette has been fantastic. They embody what we embody. Our superstars are larger than life and they have a persona that really jumps through the camera,” he said, choosing his words carefully. “Gillette is all about presentation and performance. It’s one of those things where if I had a wish list of partners to be affiliated with, Gillette’s the top — not just for what they stand for, but for how they conduct business.”

But what does he get from the endorsements, aside from the obvious monetary gain? Again, it’s “we” and not “me”.

“Well, hopefully we can bring something to the product. Gillette’s products stand on their own. They’ve been in business for quite a long time, just putting forth a quality product,” Cena explained. “When we affiliate with them we just hope we can bring the awareness of their product to our fanbase. It’s impossible to ignore the WWE Universe. We just want to pretty much have an opportunity to showcase what we can do for Gillette.”

Scuttlebutt has Cena as one of the major proponents of WWE’s shift from a mature on-screen product to a more family-friendly broadcast. His finishing move, for example, used to be known as the F.U., in a not-so-subtle shot at his opponents. Now it is the Attitude Adjustment. Cena is firm in the belief that a more PG WWE has helped the company.

“It’s helped in the ratings, it’s helped with the revenue,” he said. “When you go up and up and up in the ratings charts, from PG to PG-13 to R to NC-17, you really pigeonhole yourself as far as the number of eyes that can see your programming. I think now, with the success of the Attitude era in the late ’90s, and now, here we are 10 years from that, I think the Attitude era has had their children and now they want to enjoy the same experiences and the same fantastic events that they watched in the ’90s, but they want to be able to have their kids enjoy it with them. So I think it was the absolute correct move.”