Believe the hype for Too Damn Hype

His dedication to the business has earned Newfoundland’s Too Damn Hype plaudits from his peers.

“Well, Too Damn is solid when it comes to working in the ring. He is not all about spots, he is about the the old-school work and feeling the audience out to see how the match can go instead of planning everything start to finish,” said former WWE Superstar Highlander Robbie MacAllister, who is currently Heavyweight Champion with Hype’s home promotion, St. John’s Legend City Wrestling. “He is one of the top guys in Newfoundland… and is heading in the right direction in making Newfoundland a solid territory again.” 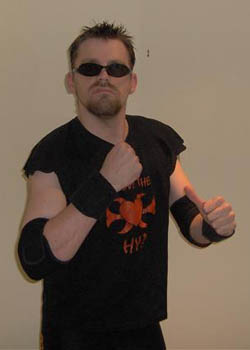 Kowboy Mike Hughes has worked several East Coast tours with Hype and called him “a great guy and a solid worker.” He believed Hype is helping lay down a strong foundation for building wrestling in Newfoundland.

“Hype is a solid hand who you know is going to elevate younger, less experienced workers and bring out the best in them,” said Hughes. “If he’s in there with another more experienced worker, he will more than hold up his end of the match. He reminds me of a Hubert Gallant-type of worker — never billed as a superstar but can make others around him look like superstars.”

So just who is this Too Damn Hype? He is Newfoundland’s Andrew Roil, who was practically steered into becoming a wrestler at 18.

“I was at a wrestling show that my two buddies were wrestling at to tape it for them, and Sailor White came over to me after the show and asked if I wanted to start training,” said the 32-year-old, 6-foot-1, 218-pound Roil.

His friend Matt Richards, who has known him for about 16 years, insisted he had a big hand in getting White to bring Roil on board.

“I got him his start in pro wrestling,” said Richards. “We were friends from a little while before. And I had recently started training with Sailor White and had had a few matches when I suggested to Sailor that he should allow Andrew to start as well.”

Roil said training with White was “fun” but “tough” as well. “He made us do pull-ups and sit-ups, but we did any wrestling related training. But for the most part he taught me the basics, and I pretty much learned as I continued to wrestle.”

His break came a few months into his training, when there was suddenly an opening on a card.

“He didn’t know he was to wrestle and had no gear with him. So he wrestled in the jeans and dress shirt he came to the show in. And because he looked like a cowboy, he was labeled ‘The Canadian Cowboy Andy Starr,'” said Richards.

The first rib played on Roil came just before his first match. Roil also had no theme music, so Richards and another wrestler promised to help him out. Roil ended up running to the ring to You Got It by Roy Orbison.

“He realized it half way to the ring when he started laughing and signalled to the music guy to cut,” recalled Richards.

Like others who have worked with him, Richards put over Roil affectionately. 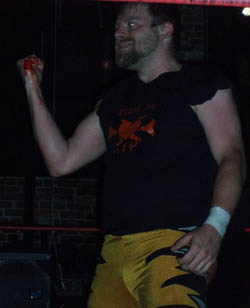 “I loved working him and would love to work with him again,” Richards said. “I haven’t seen him work in eight or nine years, but if he has even improved a little since then, I’d say he is one hell of a worker, ’cause he was damn good back then.”

Roil, who also works as an assistant kitchen manager at Don Cherry’s Sports Grill in Mount Pearl, Newfoundland, admitted to being a bit of a homebody. When asked about his goals, he had to laugh.

“I would like to wrestle in every province in Canada at least once — got six left to go.”

But if Roil prefers to stay close to home, that is just fine by Steve Clarke. Clarke, who wrestles as Lance Romance and promotes Legend City Wrestling, has known Roil for 10 years and has wrestled him all across Atlantic Canada.

“If there is one thing that I can say about this gentleman, it is that he is possibly the most underrated worker in Canada. He’s a very old school heel who gets the job done night after night. The matches that he’s had with Chris Hamrick, Vance Nevada, Highlander Robbie, Marco Estrada will match up and surpass ‘match of the night’ on any indy in the country. If you’re a promoter looking to add some new flavour to your card, don’t pass this guy up!”