Nigel McGuinness has, by all intents and purposes, agreed in principle to terms with WWE. But until the final i’s are dotted and t’s are crossed, Nigel is choosing his words carefully. That is likely a good indication that he has all but signed his first WWE contract, in and of itself, but contrary to internet reports, he has not officially signed the dotted line yet, as Nigel McGuinness told SLAM! Wrestling yesterday afternoon.

“I only talked to them very recently,” Nigel told the website. “I’m not even definitely signed yet.” 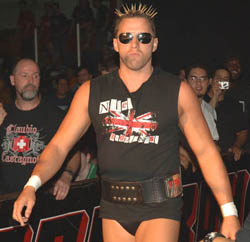 Nigel McGuinness heads to the ring in July 2008 as ROH champion. Photo by Mike Mastrandrea

SLAM! Wrestling, ROHwrestling.com, and hundreds of wrestling news outlets reported on Thursday that McGuinness had signed a deal with wrestling’s promised land, the WWE. Where there’s smoke, there is usually fire, but when McGuinness replied to SLAM! Wrestling, his answers were short and sweet, offering little in the way of information but the answers clearly lie that way — McGuinness is usually quite talkative.

For example, when asked why he chose WWE over TNA, McGuinness simply said “they made me an offer.”

Truth be told, McGuinness is playing it smart. Oftentimes in the past, wrestlers have spoken out of turn and wound up drawing heat on themselves with WWE management. McGuinness repeatedly said he hasn’t signed yet.

“I’m not definitely signed yet, so it’s a little early to talk about anything. And when I am I’m not sure what situation I’ll be in in terms of doing interviews.”

Still, sometimes you can squeeze a little blood from a stone and we did get at least a little bit of insight from the former ROH World Champion. When we started to deviate from the topic of his WWE contract, he opened up just a crack. Surely, heading to WWE with fellow ROH legend Bryan Danielson will make the transition a little bit more comfortable. McGuinness agreed.

“I think he will do very well once they see him wrestle and hopefully that perception will rub off on me.”

Always gracious and humble, McGuinness’s perception of what this means for ROH differs from popular opinion. Most would agree that the departure of its top two stars spells big trouble for the fledgling independent promotion. He sees things more optimistically.

“Hopefully it will further help ROH’s case for having some of the best talent in the world,” he argued.

And indeed, he is right in that regard. ROH has produced world class talent, not the least of which you are seeing headline WWE right now in CM Punk, and TNA in AJ Styles, Samoa Joe, The Motorcity Machine Guns, and many others. The list of ROH talent is endless and a book could truly be written on their contributions to North American wrestling, but Bryan Danielson and Nigel McGuinness are a cut above the rest. ROH has meant the world to Nigel McGuinness; in fact, without ROH, there’s a good chance we wouldn’t even be talking about McGuinness.

“(ROH has meant) pretty much everything on a national level. Without the push and visibility I wouldn’t be wrestling today,” McGuinness said.

If all goes according to plan for McGuinness and WWE, the contract will be signed sooner rather than later. But the fact remains, despite internet reports to the contrary, the signing is not yet official.

One thing is for sure though — if and when the contract is signed, McGuinness will be doing things by the book. He is too smart to handle things any other way, and that’s just one of the reasons WWE is going to love this guy.