EDMONTON – Mother Nature can be the ultimate ribber. While a thunderstorm put a damper, pun intended, on the Prairie Wrestling Alliance’s largest show in history, Night of Champions, the end result was incredible matches, death-defying moves, superstar appearances, and an emotional farewell.

The show was scheduled to take place in the parking lot of the Century Casino, where the PWA has made its home since November. Fans lined up late in the afternoon for a VIP autograph session with Mick Foley, Johnny Devine, Al Snow and TNA’s Jay Lethal and The Beautiful People — Angelina Love and Velvet Sky. Gray clouds rolled in, thunder crashed, rain poured down from the sky, and PWA was left with a decision. After polling fans, they moved the show indoors.

The move truly showed how the roster and staff of the PWA are a team, as the ring was dismantled and moved indoors, and the room set up, in just an hour. Unfortunately the move hurt the company in terms of a loss of walk-up crowd from the inclement weather, and having to turn people away once the venue reached capacity. Worst of all, once the ring was moved inside and set up, the sky cleared and the evening remained beautiful. Mother Nature can be a bitch. 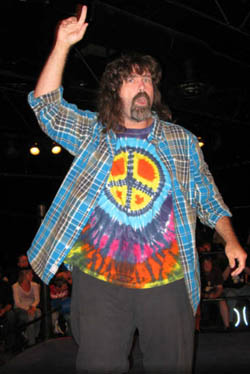 Making the best of the situation, the PWA talent and guests put everything out there and the end result was a fantastic night of wrestling. After the popular Slammer won a battle royal and guaranteed title shot and PWA Cruiserweight Champion T-Bone turned back the challenge of Pete Wilson, the first major attraction bout took place.

The first wrestling show I ever attended was May 26th, 1989 at the Saddledome in Calgary, headlined by Hulk Hogan defending the WWF Championship against “Macho Man” Randy Savage. I got goosebumps as TNA’s “Black Machismo” Jay Lethal made his way to the ring dressed as Savage circa 1989. His opponent, Dusty Adonis, has taken on other identities in the past such as The Ultimate Warrior and Kurt Angle. As the crowd exploded, Adonis hit the ring as Hulk Hogan, complete with bandanna and tear-away shirt. A blend of tribute and athleticism, the two put on a hell of a show before Lethal put away Adonis with a top rope elbow drop. Afterward, the two shook hands and posed together.

TNA’s The Beautiful People — Knockouts champion Angelina Love and Velvet Sky — took on Vancouver’s Nikki Matthews and Veronika Vice. The TNA stars dominated before scoring the victory. The team of Super Wild — “Superfly” Dan Myers and Mattias Wild — seemed very ecstatic that the scheduled ladder match had to be changed to a regular four-way match due to the ceiling height. Tag team champions Chucky Blaze and Brandon Van Danielson disagreed, stating “just because we can’t hang the belts from the ceiling doesn’t mean we can’t use ladders.” The match, which also featured the teams of Alex Plexis and M and El Reverso and Andrew Hawkes, was insane and had fans and ringside photographers dodging flying bodies. Blaze took advantage of a ladder set up on the floor on two chairs and did a Finlay roll off the top through the ladder with M. With the champions disabled, Dan Myers scored the pin on Hawkes to give Super Wild the PWA Canadian Tag Team Championships.

After a brief intermission, PWA inducted Red Thunder, “Hotshot” Johnny Devine, and referee Michael “The Fitz” Fitzpatrick into the PWA Hall of Fame. Devine spoke from the heart, saying, “This is the highlight of my career because it comes from people I love.” Stories were told about the inductees, including an amusing one of a very drunk and offended Fitzpatrick attempting to take a swing at Mickey Rourke.

A future PWA Hall of Famer made his farewell, as one of the company’s top performers, Ravenous Randy Myers, challenged Chris Steele for the PWA Mayhem Championship with Mick Foley as special guest enforcer. Myers, who recently signed a WWE developmental deal and will report to Florida Championship Wrestling next month, was greeted with a standing ovation. The two men brawled throughout the venue, using chairs, kendo sticks, and an umbrella to wage war on each other. With the referee knocked out, Steele’s manager Drew Dalby blinded Foley with powder and tried to interfere. It did not go well, and Steele ate some sock and Myers regained the Mayhem title to end his PWA career.

The “Hawk and Sock connection” posed in the ring before Foley took the microphone in praise of Myers. “I am often critical of the WWE for everyone looking the same. I have always felt that it is good to be different, and you my friend are definitely different. You have a big future and I mean that sincerely,” the hardcore legend said while an emotional Myers fought back tears.

“I got into this business nine years ago because of Mick Foley, and I can say I have been in the ring with Cactus,” Myers told the crowd before inviting his trainees into the ring and saying goodbye to the fans. After the show, he took a moment to reflect on his farewell.

“It was perfect. To wrestle Chris Steele, at this show, with Mick Foley there, it couldn’t have gone any better,” he told SLAM! Wrestling.

The show was not yet done as Al Snow took on Johnny Devine, with Danyah in his corner. Despite being cheered initially by the crowd, Devine took a lot of shortcuts and had Danyah interfere liberally, allowing him to roll up Snow for the win. After the match, Snow got revenge by blasting Danyah with Head.

The show wrapped up with the final showdown in the long simmering feud between PWA champion Gama Singh Jr. and his cousin and former tag team partner Tiger Raj Singh. The match was scheduled to be a steel cage match outside, but the cage could not be used indoors. Instead, the two fought in a lumberjack match that saw the lumberjacks brawl to the back and Tiger hit the Death Valley Driver to claim the championship.

While there was no doubt that in-ring, PWA delivered, promoter Kurt Sorochan had understandably mixed emotions. This show had been in the works for months, and the outdoor spectacular he envisioned didn’t come to fruition for reasons beyond his control.

“If we had just waited 20 minutes it would have passed, but we had to make a decision,” he told SLAM! Wrestling after the show. “Everyone really came together and I am very proud. I have never seen a ring torn down and put back together that quickly. Everyone was great to work with, we will definitely have Jay Lethal back, Mick Foley was a dream, The Beautiful People were great and we have so much respect for Al Snow. From that standpoint the show was a success.”

Promoting independent wrestling is never easy, but PWA proved why they continue to succeed eight years after their beginnings. No one who was in attendance can complain about the quality of the show from both the “names” and local talent, who took a cruel natural rib and turned it into something special.