Moviegoers will remember Jason Voorhees as the infamous, machete-wielding madman who haunted their dreams for decades in the Friday the 13th horror movie franchise. But will anyone remember the actor who played Jason? Most don’t even know his name.

Fans of Stampede wrestling remember a similar character named Jason the Terrible, who was based on the movie villain. The difference is wrestling fans will never forget the name of the man behind that mask. He was Karl Moffatt.

It’s no secret that any wrestler who wears a mask in this business is under a lot of pressure, because it often limits the performer’s ability to sell. But in Moffatt’s case, he wore the mask, it did not wear him. 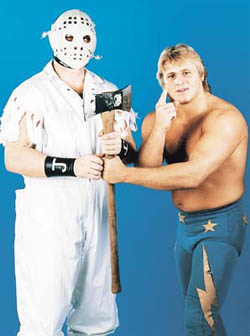 Jason the Terrible during his babyface phase with Owen Hart.

“You can’t sell with your face covered,” Moffatt said. “But it didn’t hinder my performance. If anything, it helped my career.”

Moffatt was always a big man and certainly had no problem portraying a monster. He just did the most he could with it and the fans loved to hate him.

“I didn’t know I was going to get over as well as I did and it was a big deal at the time,” Moffatt said. “People started cheering me and I was concerned, because I didn’t want to be a face. It was much easier to be a heel.”

As Jason the Terrible, one of Moffatt’s biggest feuds in Stampede, or his career for that matter, was with the late, great Owen Hart. Moffatt admits that he didn’t really get along with anybody behind the scenes, but oddly enough, he had such great chemistry with everyone he worked with, especially Owen, that nobody would be able to tell the difference.

“I didn’t really hang out with anybody backstage. Most of my friends weren’t even wrestlers,” Moffatt said. “Owen was a lot like Bret to work with. He was an excellent wrestler and he never whined or complained about anything.”

According to Ross Hart, Moffatt was very easy to spot in a crowd of people and that is perhaps why he was selected to portray a character like Jason the Terrible.

Hart says Moffatt used to be a regular at the shows and one day in August of 1981, Moffatt charged into the ring and attempted to attack one of Stampede’s performers. He ended up paying for the attempted assault, as he was tackled through the ropes and crashed through a ringside table. When Moffatt showed up again and told Ross’ brother Bruce that he wanted to train to wrestle, Ross could tell how passionate he was.

“Karl was a good worker and took some incredible bumps,” Hart said. “But he was a bit of a juice freak. It might have suited his character, but it got to the point where he was bleeding every night and it was a bit of a turn off with our audience.”

Ross was a big fan of Moffatt’s Jason character and thought it was really original and unique, and with the movie being such a big hit, it was so easy to elevate someone’s career, using the character. However, when Moffatt’s biggest fear came true and the fans ended up turning him face, Hart says the character started to get stale.

“At first he had this monster heel character who couldn’t talk and it was a real success,” Hart said. “When he started working babyface, he started to lose that mystique and was not discreet enough.”

Although there were other men who followed Moffatt by wearing the Jason mask, Hart agrees that most people never forget number one.

“He (Moffatt) was the first one to do the character and he was very good as a heel,” He said. “He got over as this mystery figure and he had great heat with the fans.” 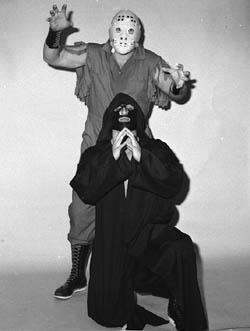 Jason the Terrible and The Zodiac (Barry Orton). Photo by Bob Leonard

Another graduate of Hart family training, Lance Storm, recalled his initial memory of Moffatt. “I met Carl at a CRMW show in Calgary. I think he was making his first comeback after that accident that destroyed his knees,” Storm said. “We worked a couple small local shows that I did between other gigs, so I never paid that much attention to him. His head but off the top was nice.”

Today, Moffatt is a truck driver in British Columbia. He was always well built and even now, he stands 6’4″ and weighs 275 pounds. He’s gone through several gimmick changes in his career, but everyone always seems to remember the one that stands out the most.

“Even today, I still have people approach me on the street and ask me to do Jason,” Moffatt said.

EDITOR’S NOTE: A small editorial change has been made to this article.