ShockWave the Robot stands out from Austin/Cena wannabes

Are you tired of seeing the same bald, jacked up, tattooed dudes in the ring every week? Aching for the wrestling personalities of days gone by, especially the most cartoonish ones? Boy, do we have the guy for you — ShockWave the Robot, the breakdancing wrestler who believes he is some kind of a cyborg.

ShockWave, who wished to maintain his anonymity, debuted in 1998 for the now-defunct World of Hurt Wrestling in Schenectady, New York. But it was not until 2006 his robot gimmick started taking shape. 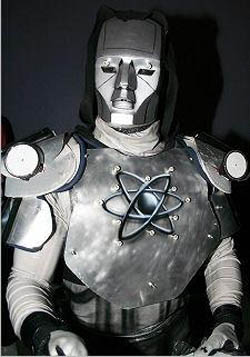 “I wrestled as ShockWave, just a generic babyface when I first started,” the mysterious man behind ShockWave said. “Then around 2006, I made an armour chestplate and had a plastic robot mask.”

Face paint, specially made hand gimmicks, and sparklers complimented his presentation. But it took the advice from some former ECW originals for the character to evolve to where it is today.

“It was in August of ’06 that I had a show in Connecticut. After my match I went up to Pat Kenney, a.k.a. Simon Diamond of ECW fame, and asked for constructive criticism. He said I had an awesome gimmick but that I should do robotic movements.”

A light came on in ShockWave’s head, and he learned how to breakdance. He had his moves down by early 2007, when he attended a seminar staged by then-WWE talent scout Mike Bucci (a.k.a. Nova, a.k.a. Simon Dean).

“I wrestled in front of Bucci and the gimmick caught his eye. He called me over while he was watching some of the matches and told me I was too small to be a cyborg, but I should get a mask and a silver suit like Jushin Liger. He said that if I was a person who thought he was a robot, that gimmick could work.”

ShockWave followed Bucci’s advice to a tee, including getting lights for his armour.

“The outfit that I wrestle in continues to evolve and get better as time passes. I sweat like crazy in the suit and depending on the weather and venue, I usually come back to the locker room drenched,” ShockWave said. “The new masks have a silver mesh covering which allows me to see out but you cannot see in. Although for me it takes away detail from my sight and makes it slightly difficult to wrestle in.”

As much as that day was a highlight for ShockWave, it left fond memories for Bucci as well.

“You know what I liked about him? He’s a good, young respectful kid who tried hard,” Bucci said, adding after the tryout match, he pulled him aside to give him a few pointers. Much to his surprise and delight, ShockWave, unlike many others who have come to him to be evaluated, actually listened. “That kid did every single thing I told him to do.”

Bucci found ShockWave’s performance entertaining and ended up sending him to WWE to be an extra and/or tryout but does not know what came of that.

“There’s different reasons why people don’t get hired. Could be anything — too small, too this, too that. Who knows? But what I definitely respect him for is that kid tried really hard,” said Bucci. “He was a decent little worker in the ring and I thought he had a really cool gimmick.”

Shortly after the Bucci seminar, ShockWave set off to the Inoki Dojo in California. There, he impressed Masato Tanaka and Nakamura (booker for ZERO-1) enough to get sent to Japan to wrestle and train.

“Japan was a dream come true and I loved it there,” he said, and gushed about the newspaper coverage he received. “I trained with Hidaka and several of the girl wrestlers. By far the most grueling exercises and best athletic training that I had ever done.” 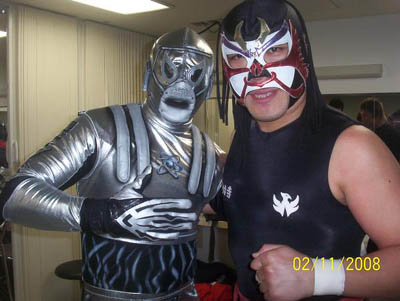 ShockWave and The Great Sasuke

Some of his Japanese matches have appeared on YouTube, which in turn has garnered him additional bookings in North America. Pro Wrestling America of Maine has scheduled ShockWave to headline its April 17 show even though co-booker Joel Bouchard has never seen ShockWave perform in person.

“I was searching on some websites looking for some possible talent to bring in and I came across ShockWave. And I was actually kind of amazed by his whole persona — it’s just really unique,” said Bouchard. “It’s something I’ve never seen in Maine wrestling, so I contacted him immediately about bringing him in.”

He felt ShockWave represents the kind of wrestling character that has faded since the heady days of “Stone Cold” Steve Austin, and the mass appeal his tough, firebrand image brought to fans and wrestlers alike.

“Everyone’s really trying to do the same type of gimmick, where they want to have just a name persona and they want to come off as some sort of hard, rough, bad guy. He’s making wrestling fun again. Kind of what we remember when we were kids when there were a lot of gimmicks, like Undertaker when he first came in and like Doink the Clown. You don’t see that very much any more; you mostly see the John Cenas and the Edges, and people like that.” 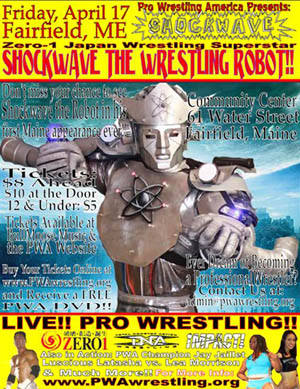 “I love it personally and he adds something original to any show,” said Hughes. “Wrestling gimmicks have been redone for years but this is the most innovative I’ve seen. Outside the ring (he’s) a true professional. He trains hard, is very respectful, and business savvy. A true asset to any promotion.”

UCW promoter and president Chuck Martin added that he would not hesitate in bringing ShockWave back again.

“His is a real good gimmick for kids and family oriented shows,” Martin said.

ShockWave, who has also trained at the Spike Dudley, Tom Prichard, and Dory Funk Jr. wrestling camps, has wrestled around 400 matches for over 20 different promotions, including IWA Puerto Rico and Ring of Honor. He is currently soliciting federations in Europe, and is wrapping up filming of a pilot about his character. Other side projects include a ShockWave comic book, as well as breakdancing on the streets and for Cirque de la Nocturne (Circus of the Night).

“I want to take ShockWave the Robot as far as the good Lord will let me,” ShockWave said. “To ‘make it,’ to me, means I do not have a day job any more and can make a decent living doing what I want to do.”