LAS VEGAS — Wrestling is a worked business, and sometimes the workers have to work each other, even when it’s the Cauliflower Alley Club president Nick Bockwinkel receiving the industry’s top award. 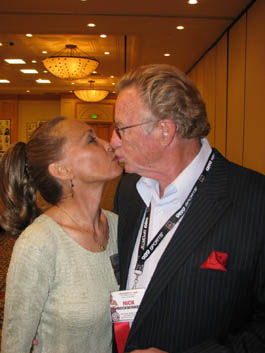 The CAC’s board of directors went to great lengths to pull off one of the great schemes in wrestling history — presenting Bockwinkel with the Iron Mike Mazurki Award without him knowing.

The last few days, board members had been told to convince Bockwinkel that a certain former WWE superstar would be getting the Iron Mike Award, when it fact it was the former AWA World champion’s chance to be honored, joining a very exclusive list of men.

Bockwinkel’s wife Darlene may have been the toughest sell, as she was reluctant to cancel golfing plans with friends just for another night out with her husband’s old friends.

“Nick will be very, very proud. He doesn’t know that I know,” said Darlene Bockwinkel before the CAC’s big banquet at the Gold Coast Hotel and Casino on Wednesday night. “The fact that his peers [are honoring him], that’s what means more, when his peers give it to him.”

Bockwinkel accepted the award as the finale to the banquet, the crowd of 400 rising to its feet to celebrate one of the true greats of professional wrestling.

The award for Bockwinkel wasn’t the only surprise of the evening.

Who knew, for example, that Japanese export Akio Sato, who performed as a part of the Orient Express tag team in the WWF of the 1980s, and worked countless territories as a foreign heel, could tell jokes? And a lot of them.

Certainly not Terry Funk and the evening’s master of ceremonies (who said Sato was “87 years old and looks 35”), J.J. Dillon, who introduced their friend for his International award. 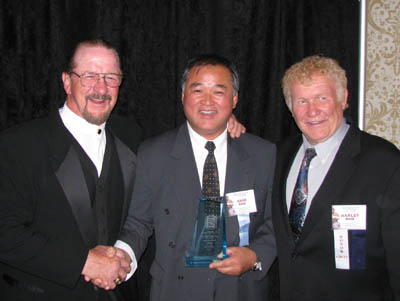 After almost 20 minutes of speech by Sato, summed up by Sato’s assertion that “I’m happy with what I’ve done,” a stunned Dillon returned to the microphone.

“That’s more talk that I heard out of Sato since I’ve known him since 1970,” cracked Dillon, asking Sato’s wife, former women’s wrestler Betty Niccoli, how they managed to have two children with Sato talking so much.

The most emotional of the 2009 CAC honorees was Luna Vachon, her voice cracking — more than usual — and eyes swelling up.

“There’s so many people in this room that I owe a thank you to,” said Vachon, the fourth member of the family to be honored by the CAC, after her father Paul “The Butcher”, uncle Mad Dog, and late aunt Vivian. “To receive an award like this, for someone like me, means more than you’ll ever know.”

The rest of the evening’s honorees were a little more sedate. 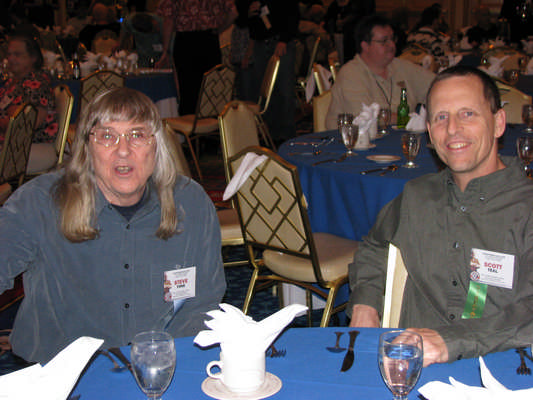 Lou Thesz Award winner Bob Roop was never a big promo man during his days as a pro wrestler, though is a real talker outside the ring on the right subject. At the podium, his acceptance was short. Similarly, the Art Abrams Lifetime Achievement award winner Reggie Parks was relatively quick; in fact, before the event, he asked whether he could get away with just saying thank you.

Ted DiBiase was called to the podium to introduce his friend Art Crews, and used the opportunity to thank those in the audience who had meant so much to him, such as Harley Race, who was beside his father, Iron Mike DiBiase when he died in the ring, and Terry Funk, who brought Ted his father’s gym bag the day after his passing.

DiBiase called Crews “too nice to be in this business” and praised Crews’ post-wrestling career in law enforcement. “This guy that used to wrestle me is now large and in charge” of a Texas prison, said the “Million Dollar Man.”

Crews talked about how he “learned to be a man in this business” and gave particular shoutouts to his wife, three children, and friends from law enforcement who came to Vegas for the banquet.

The 2009 CAC cribbage tournament winner, Dick “The Destroyer” Beyer, talked a bit about posthumous honoree George Gordienko, who was a star wrestler and artist, before turning the microphone over to George’s nephew Ted, who explained that he promised his uncle that he would “raise his name up in both of his professions.”

The CAC announced that the 2010 reunion will return to the Gold Coast Hotel and Casino.