Self-described American badass Kid Rock once said: “If it looks good, you’ll see it. If it sounds good, you’ll hear it. If it’s marketed right, you’ll buy it. But if it’s real … you’ll feel it.”

I can feel it: Wrestlemania 25 is just around the corner and Kid Rock will be there performing a medley of songs as part of the big event at Reliant Stadium in Houston. 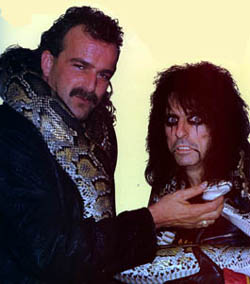 When Kid Rock hits the stage — the “grandest stage of them all” — it will be the quintessential “Rock and Wrestling Connection,” as Rock’s music is a boisterous, brash, and sometimes crass reflection of American spirit. Just like Wrestlemania.

And while rock bands like Saliva, Limp Bizkit and Motorhead have performed at previous Wrestlemanias, others, like controversial rock icon Alice Cooper, have been at ringside and part of the action.

Just hours before a recent concert in Prince George, Alberta, Cooper shared his memories of Wrestlemania III and being in Jake “The Snake” Roberts’ corner during his match with The Honky Tonk Man.

“I had performed in front of big audiences, but nothing like (Wrestlemania III),” said Cooper. “It was terrifying, and I remember telling Jake as we were riding that little ring on wheels down the aisle, ‘This isn’t my audience, my audience isn’t as crazy as this.’ It was one of the most terrifying things in the world — 90,000 people, wrestling fans, 60,000 of them were blue-haired ladies going nuts and screaming for blood.”

After the match between Roberts and The Honky Tonk Man was over, Cooper jumped in the ring and helped Roberts throw his snake, Damien, on manager Jimmy Hart. “I’m used to snakes, and have them in my shows but I remember Damien was a big one,” said Cooper, whose first snake, Kachina, was the cover girl for his classic 1971 album, Killer.

On the Pick Your Poison documentary DVD, Roberts says while growing up he idolized Alice Cooper. And Cooper returned the sentiment: “Jake was great,” said Cooper. “We had time to get to talk quite a bit before Wrestlemania III, hanging out at the Marriott.”

Cooper said that while talking to Roberts backstage at Wrestlemania about their upcoming performance, tempers flared after the mixed tag team bout between King Kong Bundy and his midget team of Lord Littlebrook and Little Tokyo against Hillbilly Jim and his midget team of The Haiti Kid and Little Beaver. “I had been watching the match and was having a blast seeing Bundy body slam the one midget (Little Beaver),” laughed Cooper. “Then I see them all come through the curtain afterwards and the midget with the Mohawk (Little Beaver) is screaming at Bundy — for real! He’s yelling, ‘Why did you do that! That wasn’t supposed to happen — why did you that!’ He was seriously angry, and it was quite a sight.”

While Cooper has plenty of memories of Wrestlemania, rock and roll legend Ozzy Osbourne has none. When asked in interviews about Wrestlemania II, where he accompanied the British Bulldogs (The Dynamite Kid and Davey Boy Smith) to the ring for their tag championship match against the Dream Team (Brutus Beefcake and Greg Valentine), Ozzy has said he doesn’t actually remember the occasion.

It’s more likely that Ozzy, now clean and sober, remembers performing live on Smackdown! back in 2007, as he and his band played the song I Don’t Wanna Stop, the theme song for WWE’s Judgment Day. Osbourne’s guitarist for the past 20 years remembers it well.

“It was the shit!” Zakk Wylde told me from Saskatoon this past week, while on tour with his band Black Label Society. Wylde said when not touring, he loves being home watching wrestling and drinking beer.

Wylde’s persona could be described as part Viking, part beer-swilling biker — a heavy metal version of “The Texas Rattlesnake” Steve Austin, but with lots of hair. “I’m a big fan, and friends with Steve,” said Wylde, who recorded Austin’s new theme music in 2002. “He just asked me,” Wylde explained, then adding in a spot-impression of Stone Cold: “Zakk, come up with some music for me you goddamn son-of-a-bitch.”

I asked Wylde if he has a favourite wrestler: “Ultimate Warrior is the shit!” said Wylde enthusiastically. “He’s the man, with that headbanging, and heavy metal look — he was wild. J.D. (John DeServio, Wylde’s bass guitarist in Black Label Society) here likes Sgt. Slaughter, and we were just talking about how Slaughter would call Warrior, ‘The Ultimate Puke.’ We still laugh about that.” 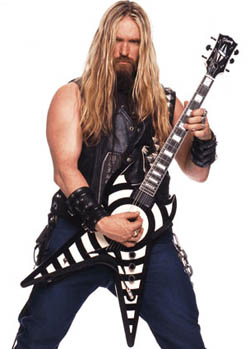 Zakk Wylde’s band Black Label Society will be performing in Toronto on April 4, the day before Wrestlemania 25. With the next concert planned for April 6 in Hartford, Conneticut, I asked Wylde if he plans to watch Wrestlemania 25 on his day off. “Yeah man — I got to see my boy Chris Jericho!” said Wylde. “Man, you can’t pay enough money for that kind of entertainment — he’s the man. Did you see Jericho and Mickey Rourke on Larry King? That was amazing, funny shit! That movie The Wrestler is ass-kickin’. It’s the truth, man. It’s real.”

Alice Cooper hadn’t seen the movie The Wrestler yet when we spoke, but said that being at Wrestlemania was like nothing he had ever experienced. “That was the craziest audience in the world, it really was,” Cooper concluded. “I remember looking around at that massive crowd and I kept thinking, ‘They don’t really believe this, do they?’ I think they did.”

In the world of wrestling, I told Cooper, it’s not about believing it, it’s about feeling it. And in the words of Kid Rock: “If it’s real … you’ll feel it.”