Over the past few months, I can say with little hesitation that the WWE program I’ve enjoyed the most is the WWE 24/7 roundtable show, Legends of Wrestling.

Being the TV viewer who enjoys shows like TSN’s The Reporters, that fact may not be surprising; but even more than the idea of a group of knowledgeable gentlemen waxing nostalgic and making pro and con arguments about the legacy of wrestlers past, Legends of Wrestling has given a kayfabe-shattering perspective on wrestling’s history.

You can only imagine, then, how excited I was to watch the new WWE boxed set featuring three episodes from the show. Forget the matches included (though there are some good ones here), I want to hear some good old-fashioned back-and-forths from WWE’s best analysts.

Well, I was happy with what I received… on one of the discs.

You see, the majority of the Legends of Wrestling shows I’ve watched have been debates and discussions that focus on a topic, such as the Monday Night Wars, the territories or bad asses (just to name a few). Here, however, we get one of these subjects, Heatseekers, while the other two discs look at specific wrestlers, in this case Ric Flair and Sgt. Slaughter on one disc and the Junkyard Dog and Jerry Lawler on another. 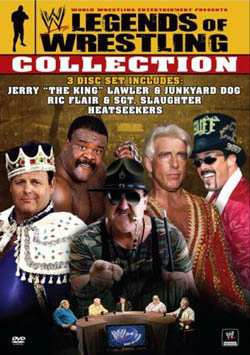 In Heatseekers, we learn about some of the drama kings backstage. Getting a good variety of looks here keeps the conversation lively between our panelists — Jim Ross, Jerry Lawler, Michael Hayes, Eric Bischoff and Mick Foley — some of whom can easily be described as heatseekers. (I’ll let you decide for yourselves who those individuals are.)

There are some really good stories shared, and I won’t spoil them here. Suffice it to say, very few of the classic primadonnas are talked about here, including, perhaps surprisingly, Paul Heyman and Vince Russo. Another highlight is discussion about Marcus “Buff” Bagwell and, naturally, his mom.

Perhaps the most interesting discussion is reserved for Lex Luger, who while being criticized is also applauded for his work and position in NWA/WCW. It’s an interesting mix which entices the viewer to watch more on Lex (who conveniently is on the ’90s DVD as well).

The “profiles”, meanwhile, were filmed as part of a series where the roundtables looked at the stars of the 1980s, seemingly around the time when that decade’s best and brightest were profiled on a DVD release, and by comparison you’re getting weak discussion here. While each of these stars (to varying degrees) are discussion-worthy, there’s little here in terms of debates or arguments, which are the real fuel in the fire of the Legends of Wrestling shows. If you were to debate the merits of, say, Flair versus Hulk Hogan over the greatest superstar in the ’80s or Bret Hart and Shawn Michaels in the ’90s, then you have enough to go with to make a compelling show. As is, I didn’t get nearly the same amount of enjoyment out of watching these two Legends of Wrestling discs as I did Heatseekers.

Of course, there is another reason why I didn’t enjoy these discs as much as Heatseekers. You see, the panelists that WWE chose for the ’80s discs include four great personalities — Michael Hayes, Pat Patterson, Jim Ross and Dusty Rhodes. Unfortunately, there’s a fifth member of this crew that just doesn’t belong — Mike Graham. Graham, to me, just didn’t fit in here, especially when you consider that Lawler, Foley, Flair, Tazz and Bischoff have found themselves at the table at other debates. I’d much rather have seen “Uncle Eric” talk about Slick Ric than Graham.

That’s not to say that you should avoid these two discs. For the wrestling fan who generally likes roundtables and want to learn road stories about Flair, Slaughter, Lawler and JYD, I’d highly encourage picking up the Legends of Wrestling discs. Just know that the quality isn’t quite the same as it is on the Heatseekers disc or some of the other shows WWE has done.