Mania’s build-up has been mostly forgettable

No matter that WCW’s Starrcade event once used the tagline “The Grand-Daddy of Them All,” ever since its inaugural event in 1985, Wrestlemania has been the biggest annual spectacular in professional wrestling. The main attractions of each event stood up as the biggest matches in company history, and there was excitement among the fans and wrestlers themselves as they prepared to shine on the Wrestlemania stage.

This year, though, seems different.

While there are no in-ring participants who would admit to the same, the fan furore surrounding Wrestlemania 25 — what should be a memorable anniversary, no less — is distinctly lacking. The reasons are obvious, with the top tier matches either offering nothing fans have never seen before, or even worse, bouts that they have no interest in. The rushed, inconsistent build-up to the matches hasn’t helped, either.

The deadly combination of all of these factors is represented best in the Hardy Brothers’ Extreme Rules match. This program was attempted once before, in 2002, but was quickly dropped because the interest levels in the match were so low. So much for learning from your mistakes.

This time around, the situation is even worse, given that the angle used to match the two up has been so repulsive. Not only did Matt take credit for knocking Hardy unconscious prior to the Survivor Series, running his car off the road, and setting up a pyrotechnics accident on Smackdown, but he also took credit for burning down Jeff’s trailer home, that caused the death of his dog. The latter is the most abhorrent storyline of them all, given that it’s a take on what was a painful real-life situation.

In the Hardys’ instance, however, there’s also a further factor for the lack of interest in the match, that being that in the days following Matt’s initial heel turn on his brother, he reassured fans on his own website that the feud between he and Jeff was purely storyline. Wrestling may be a form of entertainment, but you have to give fans something that they can come close to believing in. 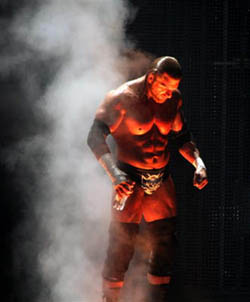 Do you buy that Triple H is really steamed at Randy Orton? Photo by R.P. Strickland, [email protected]

Speaking of which, is there anyone out there who believes that the love-triangle build-up for the World Heavyweight Title match has done it any promotional good? The Edge-Vickie Guerrero marriage is difficult enough to take seriously since they’ve already split and made up several times, but adding Big Show to the angle only takes things further down the comedic route. Comedy may be fine as a show-long build for a television match, but it should certainly never be relied upon to create fan interest in buying a pay-per-view. Furthermore, the storyline — which briefly included an April Fool’s joke of Guerrero’s pregnancy — has further devalued the World Heavyweight Title, for which Edge, Big Show, and John Cena are supposed to be competing. Cena must be hoping his next film script arrives promptly, so he can distance himself from this nonsense as soon as possible.

Though it has had its pluses, the most inconsistent build of all of the marquee matches at Wrestlemania has undoubtedly been for the WWE Title match between champion Triple H and Randy Orton. Things started off tremendously, with the angle in which Orton appeared to come as close as humanly possible to kicking Vince McMahon’s head clean off his shoulders. But things took a skydive-like drop when Shane McMahon embarrassingly beat up all of the Legacy group single-handedly on the January 26 edition of Raw, and got even worse when, after Orton had injured Stephanie McMahon, Triple H went to his house, literally rang his front doorbell, and proceeded to destroy everything in sight with a sledgehammer. It was a case of WWE once again trying to compete with non-wrestling programming, and typically, failing miserably.

In the eyes of the fans, however, the Wrestlemania match may just about have been saved by the closing angle on March 25 edition of Raw, in which Triple H was handcuffed to the ring ropes and forced to watch as Orton DDT’d his wife. Key to the angle was Triple H showing some emotion, and breaking down in the ring when Stephanie was injured. It was a rare moment in which he allowed himself to look vulnerable, and the moment will be integral to how the fans get behind him at Wrestlemania.

As WWE chairman, Vince McMahon will have to hope that the better parts of the latter feud translate into pay-per-view buys, but what is more important than that is that he learns that this isn’t the way to build any pay-per-view, never mind the biggest on the calendar. Sure, there may be more twists and turns now than at almost any other time in WWE storyline history, but what does it mean if no-one is (literally) buying into it?

At the end of the day, stories are what sell wrestling to its audience, which is something, ironically, that the Ultimate Fighting Championship has discovered, and taken to a new level in recent years. Swerves, comedy, and inane skits don’t inherently mean good stories; in fact, they are usually shortcuts that only serve paper over the illogical cracks.

Let’s all hope that Wrestlemania 25 will be as memorable as the anniversary deserves to be, and not as forgettable as it’s build-up suggests.