By PETE JARVIS – For SLAM! Wrestling

When I first saw Andre the Giant: A Legendary Life in the store, I was reluctant to buy it. However, my need to own every wrestling book on the market took over. 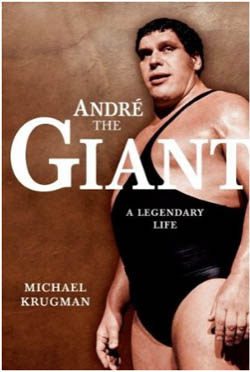 At first glance, I was not overly impressed, but once I dove in, I realized there was more here than I expected. Not much info on author Michael Krugman, but he must have an in with the WWE, as it is his third Fed book, after working on Lita’s, The Hardy Boyz and Eddie Guerrero’s.

Contrary to stories told before about Edouard Carpentier to North America, Judo Al Hayes (Lord Alfred) is credited as one of the first mainstream wrestlers to befriend Andre. Fortunately Hayes spoke French and traveled with Andre early in Europe.

Andre’s days in New Zealand in the late 1960s are mentioned briefly, as are his days in the various territories, again briefly.

The oft-told story of Vince McMahon Sr. taking over the big man’s bookings is covered as well, but not much is disclosed about what kind of percentage Vince took for booking Andre everywhere. Not that I really expected there to be.

The book contains many interesting quotes from the likes of Ernie Ladd (must have been a while ago), Jack Brisco, Hulk Hogan, Blackjack Lanza, Roddy Piper, Jerry Lawler, Howard Finkel, Bobby Heenan, and Vince, Shane and Stephanie McMahon. The most entertaining, though come from Tim White, former referee and Andre’s longtime traveling companion.

Of course Frank Valois is covered as well. He was one of Andre’s earlier “handlers”, and often wrestled on the undercard of most towns Andre appeared in.

Author Krugman seemingly makes no attempt to speak with any of the wrestlers Andre first worked with in Quebec. It would have been nice to see some quotes from Carpentier, Don Leo Jonathan, Gino Brito, or the Vachons.

The majority of the book covers Andre’s days in the WWF. This is done in a rather unique manner. Interviews for upcoming matches are apparently printed almost verbatim. Feuds and angles are described in detail in the order that they occurred.All the big matches are covered in a very descriptive fashion. I must say, I’ve read many match descriptions before, but these are, by far, the best I’ve ever read. You can visualize the match unfolding in your mind. Great narratives.

The book closes with the Andre’s final days working in Japan, and his last days and ultimate demise in France.

As a fan, I would have liked to read more about Andre’s travels in the different territories. There is a little bit mentioned — Jerry Lawler talks about bringing Andre to Memphis, and there is a humorous quote from Jack Brisco regarding a Battle Royal in Texas. But it isn’t enough to prove to a casual fan what a drawing card Andre was at his height.

Another thing missing from the book are details about his daughter, although this has always been somewhat of a taboo subject.

However, the legendary drinking stories are there, but often come across as a sad release for a man so big, and in so much pain towards the end, he didn’t have much else.

Not the best wrestling book I’ve read, but for fans of Andre’s work in the WWF, a good read, all in all.

PETE JARVIS is a Hamilton native, who also lived in Florida in the ’70s and ’80s, was exposed to a plethora of wrestling dating back to 1967.