WWE usually gets it right with their compilation DVDs and their latest collection on the history of Starrcade is more than right – it’s impressive.

Starrcade, once the NWA/WCW equivalent to WrestleMania, was sadly pushed to the curb when WWE bought WCW, but its memories are not forgotten in Starrcade: The Essential Collection, a three-disc set released recently by WWE. 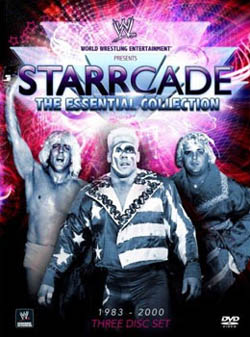 As you might imagine, all the big names from NWA, WCW and Jim Crockett Promotions are on the collection and what a list it is: Ric Flair, Dusty Rhodes, The Road Warriors, Sting, The Midnight Express, The Rock ‘n Roll Express, Hollywood Hogan, Ricky Steamboat, Harley Race, The Steiner Brothers, Rowdy Roddy Piper, Arn Anderson, Tully Blanchard, Lex Luger, the list goes on and on. And what a treat, too, is that WWE left in the original announcers for the matches and the viewer is blessed to hear Gordon Solie, Bob Caudle, Tony Schiavone, Jim Ross and Jesse Ventura. Gary Michael Cappetta as ring announcer is also part of the time warp.

There are 25 total matches on the DVD, all in their entirety, and each one makes the viewer yearn for the times gone by of wrestling. The stuff on WWE pay-per-view today has nothing on the good ol’ days of Starrcade. The matches are in a “top 25” format with arguably the best Starrcade match of all-time (Flair vs. Race in a cage in the ’83 World title match) only listed at No. 3. Flair and Big Van Vader for the WCW belt 11 years later comes in at the top spot. Hmmm. Not sure about that.

Three matches from the Iron Man Tournament in 1989 are part of this set and each one – Sting vs. Flair, Steiners vs. Road Warriors and Sting vs. The Great Muta – rocks to the bone. The 1983 dog collar match between Piper and Greg Valentine is also shown and is maybe a bit low as the sixth-ranked match. Two scaffold matches get some air time as the LOD and Midnight Express go at it in 1986 and the Midnights and R ‘n R Express battle one year later.

Magnum T.A. and Tully in their legendary steel cage “I Quit” match from 1985 is No. 2 and while it is a solid match, it’s also on the WWE steel cage compilation set from 2003. But it does not hurt to see this again and wonder what might have been if Magnum hadn’t been a reckless driver.

Other matches on this collection are include the infamous Goldberg-Kevin Nash WCW title match from 1998, Steamboat and the late Jay Youngblood against the Briscos in a World tag team title match from ’83, and the cruiserweight ladder match from 2000 involving 3 Count, Evan Karagias and Jamie Noble and the Jung Dragons (with a pre-mustachioed Jimmy Wang Yang) that proved that even when WCW was on life support, the cruisers could still go. It’s not like that in WWE. Never has. Never will be.

The 1996 “match of the decade” between Hogan and Flair is somehow included on this DVD and the match and the title of it are a farce. Both were past their prime at this point and calling it the decade’s best, well, nothing could be further from the truth.

The first disc is the documentary portion of the DVD and, like many WWE releases, this is a must-see. David Crockett gives the viewer a quick rundown of JCP. This segment should have been longer and not too many fans nowadays can learn about JCP on the Internet. Nor do today’s fans care.

Many of the people interviewed refer to Starrcade as the Super Bowl of wrestling and the forerunner to WrestleMania. Based on the 25 matches here, and even some not shown, Starrcade probably tops WrestleMania in overall match quality, but maybe not so much in glitz and glamour. Then again, WWE these days is 95 percent glitz and five percent in-ring matchups.

WWE (then WWF) ousting Starrcade from the Thanksgiving night pay-per-view slot in favor of the Survivor Series is discussed and J.R. seems to be somber in talking about the Starrcade growth stalling at this point. Crockett said Vince McMahon even threatened several cable companies. Some things never change when it comes to Vince getting his way.

Ted Turner getting involved only helped the NWA and Animal makes the comment that Starrcade became the “cavalcade of champions.” He’s right.

One downer of the DVD comes when Eric Bischoff says he never saw Starrcade as the top show of the year. But all those that talk about Starrcade in the late ’90s say it was the one of the top heights of the show’s success. Some also have mixed feelings on the Goldberg-Nash match in 1998. Internet pundits can comment as they wish.

Overall, this DVD is friggin’ awesome. It’s a 10 out of 10, five stars, top of the line, however you want to say it. For any fan of the NWA/WCW and the old school age of wrestling from the 1980s and 1990s, this is a definite flashback to the glory years.

For the new school order of fans, odds are they’ll read this and wonder who half the guys mentioned are. Expect Wikipedia to get a huge onslaught shortly.