If looks could kill, Deanna Conda would be wanted for murder.

At 5-foot-9 and 185 pounds, Conda possesses a combination that most female wrestlers can only dream of. On the one hand, she is one of the most physically opposing women in the business, but on the other hand, she is also one of the most physically attractive. She is appropriately titled “the Glamazon from the Amazon” and while she’s built like Tarzan, she still looks like Jane. 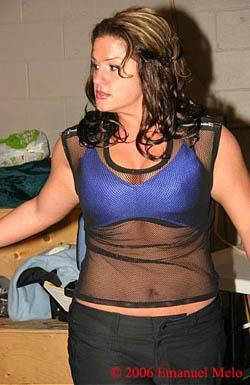 “The name Glamazon was NOT taken from Beth Phoenix and as a woman of somewhat ‘generous proportion,’ I have referred to myself under this reference for years,” Conda recently told SLAM! Wrestling. “A ‘Glamazon’ is a big hot tough girl diva. Not all divas have to be small and petite. You can be just as fierce while kickin’ those curves!”

Conda, 31, has always been a fan of aggressive sports such as boxing and mixed martial arts, so it didn’t take long for her to take an interest in pro wrestling.

“When I was younger, I thought it would have been the coolest to tell people I was a wrestler. I even had a name all picked out when I was 11…I was going to call myself Onyx,” Conda said. “When WWE Tough Enough came out, I wanted to try it even more. I saw regular people just like me learning how to wrestle. I thought if a regular person can do it, why not me!?”

Being a woman of such great stature, it’s only natural that Conda would gain inspiration from another female wrestler of similar size. She says the biggest influence on her career was former WWE star Chyna (Joanie Lauer). “I still think she is awesome! She is a big tough girl but still maintains femininity and is hot as hell!”

Born Dima Issa, and originally from Lebanon, Conda moved to Canada at a very young age and now lives in Toronto. She started her wrestling training at Ringmasters Pro Wrestling gym in Brampton, under Ted Herbert. About a year later, she started with Ron Hutchison and Rod Boudreau and then moved on to Squared Circle to train with Rob Fuego (Rob Etcheverria) and Steve “Kobra Kai” Cvjetkovich. Cvjetkovich immediately saw something unique in her.

“Her physical presence is much more different than other female wrestlers,” he said. “She had a great personality both in and out of the ring. She had very little ego and a good attitude.”

Cvjetkovich said the trainers at Squared Circle always try to teach different styles to their students. He says more often than not, the women will be in the ring with the guys and the cruiserweights will wrestle the heavyweights. 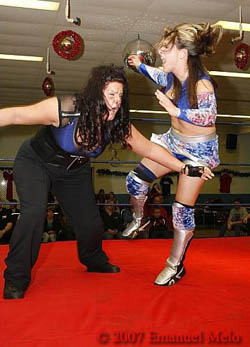 Conda says she has no problem wrestling with men. In fact, she prefers to wrestle the guys.

“I love facing men. I do not feel that men tone it down when they face me, mainly because they know I can go toe to toe with them,” she said. “I do not get hurt easily and have a very high pain threshold. The men that I have wrestled had no complaints because of this. I’m not exactly dainty.”

The other trainer at Squared Circle, Rob Fuego, didn’t work too close with Conda, but had mostly positive things to say from the few times he did work with her. 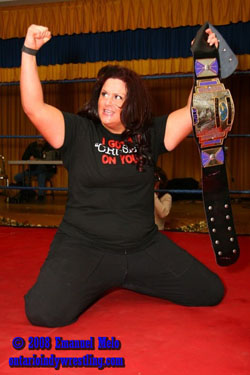 “She wasn’t very consistent coming in, but when she did train, she was very cooperative and easy going,” Fuego said.

He added that Conda was a hard worker, but as a big person, it’s understandable that she would have problems, because of her size.

“Bigger people seem to be limited as to what they can do,” Fuego said. “I don’t know what it is, but they tend to be a little less coordinated than the smaller wrestlers.”

Because of her size, Conda is just a natural heel. She was a little uncomfortable with it at first, being such a nice person in reality, but she says it’s hard being a babyface when you dwarf most of your opponents.

“In the beginning, I was a little uncomfortable to have people heckle me. Now, I love it. I am actually more comfortable being a heel than a face,” Conda said. “I am bigger and stronger than most girls so it only makes sense. The crowd needs to be prepared when they heckle me, I heckle back!”

Her most notable feuds on the independent circuit have been with Lufisto and Jamie D (TNA’s Sirelda).

Cvjetkovich thinks Conda should keep doing what she’s doing and wrestle on as many shows as possible, in order to get more and more people talking about her.

On Sunday, November 30th, Conda took a step towards more recognition, capturing the W.I.L.D. title in the Great Canadian Wrestling promotion, based out of Oshawa, Ontario. She won a tournament, defeating Charlotte Lamothe in the quarterfinals, Anna Minoushka in the semifinals, and Jamie D in the final. Upon accepting the title, she told the audience to kiss her behind.

Conda currently works in Toronto and is still unsure if she wants to make a career out of wrestling.