TORONTO – Armed with momentum from its first-ever visit to Montreal the night before, Ring of Honor set up shop at the Markham Fairgrounds last night and while the show lacked the aura of Montreal or its Toronto debut back in late July, it delivered the essential goods that ROH fans have come to expect from the company. 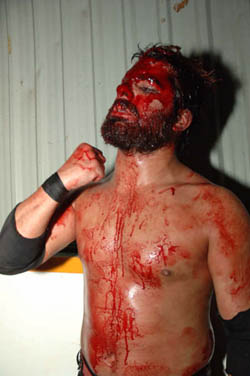 The Markham Fairgrounds may not be considered the most accessible of areas, but attendance for the small Livestock Arena was estimated around 750 people. Once the lights went down, the fans began to get ready to anticipate the action before them.

In the dark match of the evening, The Super Smash Brothers defeated Ernie Osiris and Yellow Ninja via the Frogsplash in a short but amusing matchup.

Davey Richards got the better of sentimental favorite Jerry Lynn. It was an uphill battle for Lynn, who despite landing a sharpshooter and a Hurricarana from the turnbuckle, was overpowered by the aggressiveness of Richards.

Rhett Titus and Kenny King were victorious via countout over The Age of the Fall (Brodie Lee and Delirious) in the first of the three official tag matches of the evening.

Go Shiozaki and Eddie Edwards of Sweet and Sour Inc. lost to Roderick Strong and Erick Stevens, with Strong submitting Edwards to the Stronghold.

The action began to pick up just before intermission with an Austin Aries-Jimmy Jacobs dog-collar match. Jacobs for much of the match refused to even put the collar, taking advantage of referee Todd Sinclair’s latitude and drawing the ire of the crowd. Jacobs tied Aries to the turnbuckle, grabbed a chair and nailed him repeatedly to the back. Aries escaped with a low blow, untied himself, and then dominated the second half of the match, beginning some equalizing chair shots of his own. After a spear through the ropes to the floor by Aries, Jacobs’ head was a bloody mess.

Aries took full advantage, ramming Jacobs’ head into the buckle and then went to the top rope to put him away, but in a nifty move, Jacobs yanked him off the top rope with the chain. Jacobs continued to leak like a faucet and it eventually caught up with him as he tapped to Austin’s Last Chancery submission move. The payoff was the gritty visual of Jacobs, drenched with blood, trying to withstand the hold. It would be interesting to see this match on DVD as the vocal crowd made the match even better than it probably was.

A round of applause was showered on Jacobs as he was helped to the back.

Grizzly Redwood then earned the duke over Alex Payne with a Polish-power-like double ax-handle to the chest off the ropes.

Tyler Black, Kenny Omega and Bryan Danielson competed in an entertaining three-way match. The crowd was hot for Danielson, marking out on a lot of his spots and basically anything he did. Black and Omega did get their licks in. The American Dragon did make Omega tap out with his Cattle Mutilation finisher, but in an act of respect, dusted Omega off and shook his hand. Say one thing for Danielson: He seems to carry the crowd in the palm of his hand, in part to the subtle moments of humour he seems to sprinkle in his matches.

In a ROH World title match, Necro the Butcher defeated Nigel McGuinness by disqualification when Brodie Lee and Delirious of The Age of the Fall interfered. McGuinness proposed an agreement by promising not to kick Necro’s taped right leg if he refrained from punching his injured left eye. What began as an agreement quickly became something else, as McGuinness mercilessly worked Necro’s leg, including ramming him into the barricade and using the ring bell.

Kevin Steen and El Generico cleared Age of the Fall from the ring and after a few good words for Necro, their world tag team championship match-up with the Briscoe brothers, Mark and Jay, began. This was solid back-and-forth affair with both sides getting plenty of offense. Mr. Wrestling landed most of his signature spots, with the sharpshooter and his patented moonsault off the top. The Briscoes brought their usual intensity but ended up on the losing side, as Steen pinned mark after a missed clothesline attempt.

The triumphant champions Steen and El Generico promptly celebrated their win, with Steen’s patriotic words ending a night of solid wrestling action. In some informal polling with several fans before and after the show, their sentiments seemed to revolve around the Aries-Jacobs dog-collar and Danielson matches.