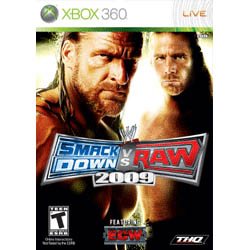 SmackDown vs Raw 2009 for the Xbox 360 is, at its core, a more complete game than last year’s version; but if you were hoping this game would be your “forever” game, the way No Mercy was for the N64 or Smackdown vs. Raw 2006 was for the PS2, well, you’ll be disappointed.

Let’s start off with the positives, though. There are several new features. The Inferno match is the first of its kind in wrestling video games. It’s put together about as well as one could expect, and it’s a fun extra option if you get tired of cage matches and Hell in the Cells. There is also a new Road to WrestleMania mode, where you can play as Triple H, The Undertaker, CM Punk, John Cena, Chris Jericho and the team of Batista and Rey Mysterio, which allows two people to play the mode cooperatively. It’s certainly a step up from last year’s 24/7 mode. Each superstar has their own unique storyline, so you can play the mode with each star and discover brand new content each time, and there are alternate endings. There is a very authentic presentation in this mode as well — you even get the copyright notice at the end of each show.

Perhaps the best addition to this year’s version of the game is the Create-a-Finisher mode. You can link up to 10 animations to develop your own unique finisher. It works brilliantly and is a very solid addition to the game. This alone makes the Career mode feel a little bit more authentic, since you no longer have to basically steal an existing wrestler’s move.

Now, the negatives. As usual, the commentary flat out sucks. It’s repetitive and annoying. At this point, they would be better of to just remove the commentary entirely. The entrance themes and sound effects and everything else are top notch, but the commentary is a nightmare.

The AI is also very buggy — for example, I had my opponent attempt to pin the referee. The matches flow a little randomly, and it doesn’t always feel like you have control over what you’re doing — it’s more like you’re pieces together a series of animations, rather than controlling your wrestler. There is also a huge emphasis on tag teams this year for some reason, which is ironic because in real life, WWE barely even acknowledges their tag teams. Even so, the tag team system works pretty much the same way this year as it did in previous years. The only difference you might see is online. You can partner up with a friend on Xbox Live and smack the yellow off the teeth of your opponents together. Pretty fun, but again, you’ll wonder if it’s even a new feature since it feels like it’s been there forever.

Overall, I’ll give this game a 7/10. Visually, the game is stunning, but for all the hype it received, the gameplay leaves something to desire. There is a load of new content, but it truly would take under a week to get through it all. What you’re left with long term is playing online, and it is on par with last year’s version.

You may want to rent this first before you buy it.