Mad Dog Vachon’s autobiography, Une vie de chien dans un monde fous, was written two decades ago, in 1988. The title of this book can be translated as “A dog’s life in a crazy world.” After reading it, it’s easy to agree that Vachon’s life was really crazy, but in so many other ways than just wrestling.

The book, written in collaboration with Louis Chantigny and published by Guérin Littérature, starts with Vachon telling the readers about his car accident that left him with an amputated leg. In fact, Vachon was walking in his neighbourhood when a car hit him hard. It’s a weird way to start an autobiography, but it’s an accident that had just happened at the time and that reconnected Vachon with his home province of Quebec, having lived in the United States for so many years. So it was a way for Vachon to tell his readers that he didn’t forget about Quebec even though he was gone for so long. 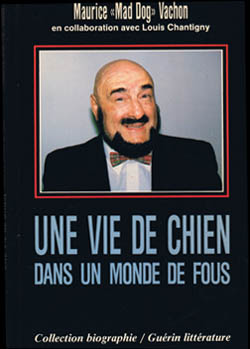 The first half of the book tells us about Vachon’s childhood in Ville-Émard (the same Montreal’s neighbourhood as hockey player Mario Lemieux). Throughout his childhood, Vachon fought — and fought. When he was only 13 or 14 years old, he was fighting with grown men. Then he started amateur wrestling to capitalize his energy. Vachon represented Canada at the 1948 Olympic Games in London, and two years later, he would win a gold medal in Auckland, New Zealand at the British Empire Games.

But that fighting spirit was in Vachon’s blood as he started to work as a doorman in some of Montreal’s well-known clubs. Vachon explains in detail a lot of his best fights as a doorman at a club called Beaver.

But the book doesn’t tell us who actually trained him and goes directly to his first match at the Montreal Forum. In fact, the book doesn’t tell us a lot about Vachon’s career in wrestling. We can read about him wrestling in Saguenay-Lac St-Jean, in northern Quebec, when he first left Montreal. It also tells us how he was given the name Mad Dog by Portland’s promoter Don Owen and brief match recollections with Verne Gagne in Minnesota for AWA and with Killer Kowalski in Montreal, but aside from that, nothing is actually said on how he got to wrestle in the west, in Japan, for AWA, Texas. Not a word is said about his feud with the Leduc Brothers alongside his brother Paul “the Butcher” in Quebec, a feud that is considered the best rivalry in the history of pro wrestling in Quebec. Talking about Paul, Vachon doesn’t acknowledge his brother’s debut in wrestling or that of his sister, Vivian.

But in every wrestling story Vachon wrote, he makes sure the readers understand that he could fight for real and many wrestling stories he chose to tell are about him at one point fighting in bars or measuring himself up with a fan or being arrested by the police because he’d gone too far.

Throughout the book, many people shared their memories of Vachon; as you probably guessed, most of these recollections are about how tough Vachon was, or other good fighting stories.The last 30 pages of the book are pictures of Vachon’s life, from his childhood until the book’s publication.

It’s obvious that Vachon wanted his autobiography to show how tough of a man he was in real life, maybe for all the ones who told him in his life that wrestling was fake. In a TV interview conducted just two years ago, the interviewer asked Vachon if wrestling was fake. And even in 2006, Vachon answered: “Come with me in the ring and I’ll show you how fake it is!” That’s probably why Vachon made the book more about his fights and his toughness than about his worldwide wrestling career. All of these stories are really fun to read, but I’m pretty sure that Vachon would have really good stories about his days in wrestling too.

Right from the beginning, Vachon tells us he wanted to be a tough man like his dad. He surely succeeded at that. In fact, his dog life was him being a rough kid, an amateur wrestler, a doorman, a pro wrestler and now someone with an amputated leg. His crazy world consisted of his neighbourhood, his amateur wrestling opponents, the clubs he was working at, every city he wrestled at and that driver who hit him.

Mad Dog was his wrestling nickname, but this could have been his day-to-day nickname. After reading this book, you too will be able to say that Maurice “Mad Dog” Vachon really had a dog’s life in a crazy world.

NOTE ON AVAILABILITY: It’s not that hard to find a copy of Une vie de chien dans un monde fous on Ebay, or, in used bookstores in Quebec. Expect to pay at least $10, with the price going up based on the shape of the 20-year-old autobiography.