Jamie Dundee probably isn’t the most well-known wrestler of Kayfabe Commentaries’ awesome YouShoot series, but like the others before him, he’s very up-front, very honest and very expletive-laden. 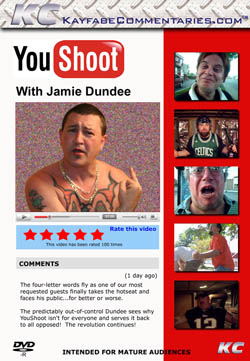 Dundee, shirtless with jeans, starts out by saying he loves all his f’n fans and says he’ll answer everything they ask and that it’s “goin’ to get dirty.” He discusses several issues like the Jerry Lawler-Andy Kaufman storyline, how he thought Shawn Michaels and Marty Jannetty were getting sexual favors from Ronnie P. Gossett, his favorite wrestler (himself) and “Tennessee style” wrestling.

As always, Kayfabe Commentaries co-owner Sean Oliver moderates the shoot and seems to enjoy himself. Dundee, who sounds a lot like Larry the Cable Guy, enjoys a Coors Light during the interview and says Oliver reminds him of Conan O’Brien.

Dundee has a unique sense of humor in that he rags on himself and southern United States stereotypes and alludes to them being true. In one instance, he details his traveling with his father, Bill Dundee, when he was just 11 years old and said when they got back to Memphis when he was 15, he was still in the fifth grade. Classic stuff.

Bert Prentice gets called “smart, gay and a wrestling promoter” by Dundee. Easy enough. One fan asks Dundee about underage action Lawler had back in the day, but the question is never answered.

He also adds that wrestlers got over in the south if he and Wolfie D put them over using the aforementioned Tennessee style where pops came when Dundee wanted them to. He also compares himself to the Three Stooges as both he and them got screwed out of money.

When it comes to family ties, Dundee tells of how his father was born in Scotland near a town named Dundee, not Australia, but Jamie was born there, moved to the U.S. when he was four and his father and Tommy Rich pierced his ears with two ice cubes and a needle. His father’s real name is William Cruickshanks and Jamie became a Dundee legally in 1982.

Of course, two big segments are the PG-13 gimmick and Dundee’s time in the WWF. He said John Cena is simply a watered down version of PG-13 and Dundee has tapes of Wolfie pumping his shoes long before Cena did. He also said The Public Enemy stole the hip-hop gimmick from PG-13, as did Too Cool (Scott Taylor and Brian Christopher). He then stared into the camera and said that even if not all those guys are six feet under, they’re all still beneath him. Wow.

Dundee’s time in the Fed was supposed to be a tag team run with PG-13 and Dundee said that would have happened had he not messed up and no-showed a TV taping in Memphis against The Smoking Gunns. He added that more could have and should have been done with PG-13 and the Nation of Domination stable. Their last match in the WWF against the Legion of Doom also gets some discussion as does Dundee’s feelings on Jim Ross and calling the WWE Hall of Fame a work.

There’s even a chapter dedicated to riots Dundee has been involved in. Most, if not all, have alcohol mentioned, obviously. One such situation happened in Martin, Tenn., where Dundee says he “drank 40 beers.” Another one has footage where Dundee gets into an altercation with a guy he says has a baby that isn’t his, but Wolfie D’s. Good stuff here.

Dundee calls out Wikipedia at one point and reams them out for not spelling Cruickshanks correctly. As we all know, Wikipedia can do no wrong.

Jay Zaretsky, a fan from Ontario, sent in a question asking Dundee if it’s true he once worked in a day care and if so, what is wrong with America? Chris Candido apparently brought this up in a previous shoot. Dundee explains that his father owned a strip club and many of the strippers had kids. Oliver asks how many Jamie is responsible for and he says “five in five states and just got me a sixth the other day.”

In the depravity chapter, Dundee pretty much calls Jacqueline the dirtiest girl he’s ever met. During his rant, his cell phone rings, but the caller hangs up. Dundee then gives his take on Hillary Clinton. Scary.

Miss Elizabeth used to be a call girl, according to Dundee, and was bought by Randy Savage from an escort service one night in Lexington, Ky., for $80 an hour, never let her go, and the rest is history. Oliver needs a breather after that comment.

Mixed martial arts gets a take from Dundee and somehow the topic drifts to the Iron Sheik and Barack Obama, assaulting God, Muslims and Christians. The beers must have been taking their toll at this point, as the shoot wraps shortly thereafter.

Dundee gets asked which company was best to work for (WWF, ECW, WCW) and goes into a deep stare with Oliver before asking what the question was again. His answer was WCW (because of the cash), but said he didn’t enjoy it. ECW had the best locker room atmosphere, so that was his best time in the business.

The interview wraps with Dundee not apologizing for offending anyone and if he hasn’t offended anyone, he hasn’t got to them yet. He then gives a shout-out to Tommy Dreamer and says he loves him. Dundee spilling a beer on Oliver’s laptop and then telling Oliver his address to send a copy of the shoot to is “Jamie’s Mama.”

As with all of Kayfabe Commentaries’ YouShoot interviews, this one is more than entertaining and takes the viewer deep into the uncensored world of pro wrestling. Dundee pulls no punches and straight-up honesty is the name of the game when it comes to a shoot. Dundee and Kayfabe Commentaries delivers on this DVD. It’s highly recommended.

Matt Mackinder used to want to be a white rapper and was even dubbed “Duce” in a pseudo-gang in high school. Then Matt grew up and got himself a life, which includes reviewing DVDs for SLAM! Wrestling.