Knocked Out DVD a real KO

Though women have been featured since day one in TNA Wrestling, it wasn’t until Bound For Glory 2007 that the TNA Knockout Division was formally launched. Since that time, the division has generated some of the company’s best characters, storylines, and matches, all of which are documented on the new DVD release, Knocked Out: Pro Wrestling’s Best Women’s Division.

With that title, it’s clear that TNA is trying to distinguish its women from those in other companies — well, in reality, mainly the WWE. Indeed, Knocked Out kicks off with TNA President Dixie Carter stating pointedly that the women in her company are not “Divas” in a thinly-veiled reference to their WWE counterparts. 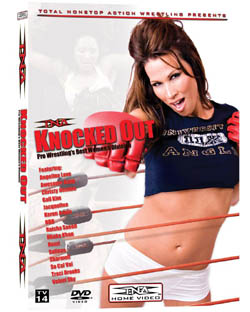 The rest of the disc is comprised of individual segments profiling every Knockout in the company. All of the current Knockouts are included, including ones that rarely or don’t wrestle, such as Sharmell, So Cal Val, Karen Angle, and Lauren the backstage announcer (Moose aka Mickie Knuckles is the only one that this reviewer can think of that wasn’t included), and recent departees Salinas and Gail Kim (more on her later).

In the individual segments, each Knockout details, in single-camera snippets, her background and her start in the business, her thoughts on the Knockouts division and women’s wrestling in general, and offers some fun facts about herself — in that way, they’re similar to the Rough Cuts segments that have been seen on Impact in the past. Intermingled with the interviews are personal photos and video clips from their lives before they were Knockouts. It’s interesting to see some of the footage of the girls from their independent days (including footage from Ontario promotions like Border City Wrestling and Squared Circle Training / BSE, and the occasional photo from sometime SLAM! Wrestling contributor Emanuel Melo of OntarioIndyWrestling.com). The interviews are candid, out of character, and are overall quite compelling.

The only exception to this formula is the segment on Awesome Kong – she doesn’t speak on the DVD and nothing is learned about her history. Instead, her segment is handled by Raisha Saeed who makes comments in character. While that comes across as a bit goofy when mixed in with shoot interviews from everyone else, it’s probably worth the tradeoff of keeping the mystique around Kong intact.

A central theme of the interview portion is that each Knockout is unique, with different experiences and backgrounds, and it is for that reason the division as a whole is so compelling. A frequent comment made is that the roster isn’t made up entirely of plastic Hollywood models all cut from the same mold. The disparity of colours, shapes, sizes and abilities is what makes it the titular best women’s division in the world.

As proof, the DVD includes a number of great Knockout matches and segments from the past year. All matches are shown in their entirety, and for the most part, they all deliver. Highlights are: the 2007 Bound For Glory gauntlet that crowned the first Knockout Champion; Roxxi vs Gail Kim vs ODB vs Angelina Love from Genesis 2007; and the series of matches pitting Gail Kim vs Awesome Kong for the Knockouts Championship. Other moments include So Cal Val’s ill-fated wedding ceremony and the match with the ridiculous stipulation that resulted in Roxxi having her head shaved (the backstage footage of her head getting stitched up after her scalping is cringe-worthy). A photo gallery of all of the Knockouts in various stages of undress caps off the collection.

A Bonus disc, that deals with the recent decision by Gail Kim to leave the company, is also included. If this were WWE, the company probably would have delayed the release date to removed all of her footage from the DVD. But TNA not only classily acknowledges her departure, but goes beyond that and actually celebrates her TNA career. While the disc itself is short — it includes a short audio-only interview with Gail discussing her decision to leave, and her last match with the company, a hardcore match against Kong — it’s a nice sendoff to Kim who is repeatedly named on the first disc as the Knockout division pioneer that exemplifies how good a women’s division can be.

Overall, Knocked Out: Pro Wrestling’s Best Women’s Division is an excellent release by TNA. The number and nature of the interviews, and the quality of the included matches help put it among the best of the company’s spotlight DVD sets. And the Gail Kim disc is a short, but welcome bonus that boosts the set’s value-for-money, making it a must-have in any collection.