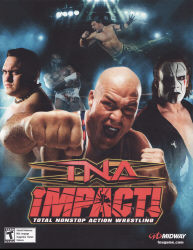 It would have been difficult for any video game to live up to the hype afforded to TNA Wrestling’s first foray into the gaming market. So it’s shouldn’t surprise anyone to hear that Impact doesn’t fully live up to the expectations. But that doesn’t mean it’s not a strong competitor either.

Released by Midway Games earlier this month, the game allows fans of the company a chance to step into 6-sided ring and recreate the action they see weekly on Thursday nights. 25 of TNA’s biggest roster names are playable, including Jeff Jarrett, Kurt Angle, AJ Styles, Samoa Joe, Jay Lethal, Christian Cage, Abyss, and the Motor City Machine Guns. Featured match types include standard 1-on-1, tag team matches, 4-man scrambles, and the company’s signature Ultimate X match. The latter is a blast to play as the added dimension of the hanging cables allow for additional high spots beyond what can be done in standard in-ring battles.

The controls are simple to use and within a few minutes, a newbie can not only punch and stomp, but hit various types of offensive moves, including power moves and aerials both inside and outside of the ring. While many of the moves can be done by any character, there are some that are unique to a specific TNA wrestler – my personal preference is AJ Styles, whose attacks in the game copy his real-life arsenal very closely.

If there is a negative in the basic gameplay, it’s that — like the company’s TV product — the game may be too heavily geared towards fast action and excitement for some, often at the sacrifice of classic wrestling tradition. Case in point: all matches are no-DQ, no-countout and there is no referee present in the game – so cheating by smashing an opponent’s head with a steel chair becomes a risk-free move. Further, the game’s emphasis on quick, free-flowing action means that from the opening bell you can hit your opponent with multiple high-impact moves in a row, but neither of you ever need to take a breather. You keep doing moves and building momentum until ultimately your opponent will be stunned for a minute and you can hit a signature finisher; but for the majority of the match, there is a definite lack of selling, which takes away some of the ‘realism’ of the game (if such a word can be used to describe a wrestling video game in the first place). It’s not to everyone’s taste, but then again, it is not a completely unfaithful depiction either.

In addition the standard matches, the game also offers a Story Mode. A disclaimer here is that this reviewer didn’t complete the story for either the X-Box or PS2 version, so the observation that follow on this are somewhat limited to events in the first 30% of the Story mode. However, of what was seen, this play mode seemed interesting, if not a bit too repetitive. The story plays like more of a quest than other wrestling games where the player must guide a player through a full career from journeyman to champion. The backstory in Impact is that your character used to be Suicide, a popular wrestler who became TNA Champion. Backstage jealousy resulted in Suicide getting beaten and left for dead. He awakes in a village in Mexico not knowing anything of his past, other than he has an innate ability to wrestle. Winning matches gets the wrestler noticed by TNA and ultimately a contract. The game progresses by putting the player in matches and feuds, presumably with the ultimate goal of recapturing his title, remembering his past and delivering comeuppance to the villains who attacked him originally. While the story is fairly interesting, some gamers will not like the lack of freedom the game offers, in that no decisions are made as to whether you want to take on a face or heel role, nor can you choose with whom you want to feud with or align with – the game simply tells you who you must fight next and assigns you partners. Hopefully future games will make this more flexible.

Which brings me back to my comment that game isn’t everything that I would have liked it to be. There are a couple of other features that aren’t included that fans would undoubtedly have wanted included. Such as: other TNA signature matches like the Six Sides of Steel, Full Metal Mayhem (TLC), King of the Mountain, and Elevation X; other match modes that are common in wrestling games like a battle royale or tables match; additional weapons beyond simply chairs (too bad if you wanted to recreate the infamous Fish Market Brawl debacle), and any TNA Knockouts (woefully omitted from the game, even as unlockable characters – a pity, given the emphasis TNA’s women have on TV).

Still, overall, Impactis a respectful, but by no means great, entry into the genre, and fans of TNA and of wrestling games in general should be able to have fun with it until something better comes along.

In-depth review (comments apply to both the X-Box and PS2 versions, unless otherwise noted)

If you’ve watched TNA’s TV over the past few months, you’ve seen how good the game looks (heck, the game has had more TV time than Jim Cornette!). The visual representation of the wrestlers is excellent, particularly the entrances which are near-perfect, and the look of the wrestlers’ bodies and faces appear to be real-scans as opposed to mere graphic drawings. The arenas are decent-looking, in particular the Impact Zone. There are some nitpicky things, such as what looks to be a permanent bloodstain on the ring match no matter what arena you’re in, and some pixellation noted when playing a customized character (NOTE: Create-a-Wrestler feature is NOT available on the Ps2 version) with detailed ring attire patterns. But overall, the game is visually stellar.

The graphics are not as crisp on the PS2, but overall still visually impressive. There was some image-skips noted, however – in one case when fighting outside, the character seemed to have been beamed Star-Trek-style halfway into the ring.

The game features genuine entrance themes and character voices, including announcing by Jeremy Borash and commentary by Mike Tenay and Don West. The match commentary is somewhat generic, however, with few character-specific calls. It’s also quite repetitive, which gets annoying after some time – so fortunatley, there are separate volume options for the music, crowd noise, and commentary tracks. A few synchronization issues were noted as well – several times, commentators call a DDT when the move was nothing close to that.

The PS2 experienced a couple of glitches with the audio. Once, the music got into a 5-second loop repeating over and over again, playing even after the match ended and over the dialogue in the story mode; another time, the same glitch but with crowd noise. Even though the problem corrected itself when the next match began, it shouldn’t have happened at all.

The controls are simple and it’s easy to pick up and play the game, which is a definite plus. All moves are fairly easy to perform, including reversals which only require the pushing of a single button, and can save you from defeat if used at crucial moments. The movesets for the characters are a bit generic in that many characters do the same moves – but everyone’s unique signatures and finishers are in there and ultimately that’s what really matters.

There are some minor annoyances, the biggest being that in a multi-man match, your wrestler doesn’t automatically adjust their focus to attack the closest opponent, even when he’s punching you. That can become a problem if, in a 3-way Ultimate X match, you want to jump up and grab the legs of a hanging opponent to pull him down but instead you end up putting a headlock on the other guy in the ring. But overall, that’s a minor complaint.

Some would say there are too many unlockable components to the game. Almost one-third of the characters in the game require unlocking in story mode. Further, a lot of the Create-a-Wrestler (N/A for the PS2) features like wardrobe and move sets are only unlocked by achieving certain goals in the story mode.

While it would have been nice to see some more variety in the match types in the game, the core offerings are plentiful enough to still have a lot of replay value – in particular, the Ultimate X match which is the highlight feature.

The story mode is interesting, though some gamers may not appreciate the lack of dynamic story flow. The cut-scenes help move the story along at a good pace and are interjected with enough humour (Eric Young is a particular standout character, and the vignettes capture his scaredy-cat routine perfectly). The estimated time to complete the game, based on the progress this reviewer made in Easy mode, is about 8-10 hours, probably much longer in higher difficulties.

As noted, the PS2 version does NOT include a Create-a-Wrestler feature. This is very disappointing as one of the best parts about playing a wrestling video game is making grapplers in either your own image or even better, those of other names that aren’t actually with the company. The X-Box’s CAW feature had enough to make a pretty good representation of yours truly – except tie-dye shirts weren’t available in the default wardrobe, so here’s hoping they can be unlocked?

Both versions included behind-the-scenes features, including some making-of footage. The X-Box game also included a bonus DVD of matches, that didn’t come with the PS2 version.

The X-Box version allows for online playing, though not all game modes are available. And Midway Games has said that there may be downloadable content in the future. PS2 users don’t have the online feature to begin with.