Right from the start of Johnny Rougeau’s autobiography, you can sense what kind of mood he was when he wrote it. Diagnosed with a liver and intestinal cancer in December 1981, the book came out in 1982, just a few months after his 53rd birthday. Rougeau starts his story telling his readers he knows it will be his last birthday. 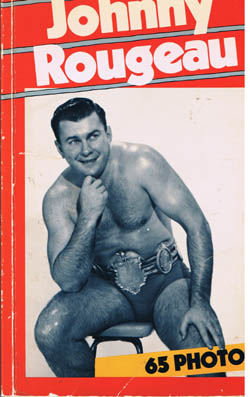 For every fan of his, the introduction is really a hard one to read as Rougeau explains why he wrote his memoir and how he feels when he takes a look back not only at his wrestling career but also at his life.Rougeau talks about his childhood and how he got interested in the wrestling business. Usually, these chapters are not really what fans are looking for. People want to know the behind-the-scene stories and wrestlers’ take on the wrestling industry. But you have to remember that this was done in a kayfabe era, where not much was said about the true insight of the business.

Rougeau tells a story from the the 1970s where he actually applied the sleeper hold to a journalist in front of other journalists and photographers. He probably did what we call now in MMA a chokehold or he was in cahoots with that journalist, but anyway, he wrote it like wrestling was real all the way, which characterized the early 1980s era as well.

What is really appealing about this biography, written in French and published by Les Editions Quebecor, is that you will learn much, much more than just how Rougeau got started in wrestling and what he did both as a wrestler and promoter. Rougeau will give you an idea of what the Montreal club scene looked like in the ’60s, what the Quebec political scene was all about in the ’60s and ’70s and finally what the Quebec junior hockey scene was in the ’70s.

For those who didn’t know, Rougeau was the owner of one of the best remembered club in Montreal, called the Mocambo. Like many of the clubs in this period of time, there was a variety show every night and Rougeau’s club welcomed the best Quebec talent as well as some of the best from the United States, such as the father of the twist, Chubby Checker, to name just one. There are many photos of Rougeau with celebrities.

Rougeau was also involved a lot in politics; he was in charge of the electoral organization for former Quebec Premier René Lévesque in the ’60s, ’70s, and was a key figure in the referendum of 1980, when Quebec wanted to separate from Canada.

If all of this wasn’t enough, Rougeau was the owner of a junior hockey team in Montreal, The Rosemont National (Rosemont is a Montreal neighbourhood). The team later moved to Laval, which is a suburb of Montreal and drafted a young guy that would become one of the best hockey players of all-time, Mike Bossy. Rougeau, at the time of his death, was still the president of the Quebec Major Junior Hockey League, which is the equivalent of NHL’s commissioner Gary Bettman but for the Quebec junior league.Between all this, Rougeau talks about his greatest moments in wrestling as a wrestler, that he got helped getting into the business by his uncle Eddy Auger, that he was taken under the wing of Yvon Robert. He talks also about his family who were all wrestlers, his brother Jacques and his nephews Jacques Jr. and Raymond (another brother, Armand, worked after Johnny’s death).

The book ends like it begins with Rougeau talking about his disease, telling readers he wrote the chapter from his hospital room.

Johnny Rougeau gives us a very good round-up of not only one of the greatest wrestler and promoter Quebec has ever known, but also of one of the most significant men in Quebec culture. Show business, politics and hockey were all there in Rougeau’s life because of one reason and one reason only: wrestling. He used his popularity he gained with wrestling to gain success elsewhere.

That’s what Johnny Rougeau wanted people to remember by writing his book and he definitely succeeded once again!

NOTE ON AVAILABILITY: It’s not that hard to find a copy of Johnny Rougeau on Ebay, or in used bookstores in Quebec. Expect to pay at least $10, with the price going up based on the shape of the 26-year-old autobiography.