For fans, NWA Legends Fanfest is the main event

For nearly 20 years, the National Wrestling Alliance’s wrestling signature event was Starrcade, a blockbuster show that attracted thousands of fans to places like Atlanta, Greensboro, and Charlotte during Thanksgiving or Christmas weeks.

Starrcade is long gone. The NWA is a husk of the organization that controlled wrestling for decades. But North Carolina promoter Greg Price is on the way to establishing a new wrestling tradition in the South. 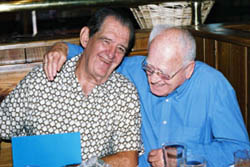 Johnny Weaver (left) shares a laugh with Rip Hawk at the 2007 fanfest. Hawk will induct his friend posthumously into the Hall of Heroes at this weekend’s event. Courtesy Mid-Atlantic Gateway

Price, the organizer of the best-attended independent wrestling conventions in the country, said this week that he has just signed deals with the Hilton Charlotte University Place to continue hosting annual events in August through 2010.

“For all of us it’s a yearly reunion of sorts,” said Price, who estimated he has been putting in 18- and 20-hour days to prepare for this year’s NWA Legends Fanfest, which will run Aug. 14-17.

“There’s something to be said for being somewhere — anywhere — around so many people that share the same love and conviction about the glory days of wrestling. Our weekend continues to grow every year.”

The expansion has not come without some growing pains. Price said he has worked doggedly to upgrade the quality of digital prints for photo opportunities at the show, as the world of imaging has changed dramatically from instant Polaroid snapshots just a few years ago.

And he’s had his share of issues with performers. This year, Price thought he had an agreement with Superstar Billy Graham to induct Ivan Koloff into the fanfest’s Hall of Heroes and participate in a public give-and-take with former WWWF champion Bruno Sammartino.

But, according to a series of e-mails released by Price, Graham backed out, demanding first-class airfare from his Phoenix home after giving Price the go-ahead to purchase a coach ticket, a difference of several hundred dollars. A nasty series of e-mails followed, including some vicious language from Graham that made some fanfest regulars wince.

Despite that bump, there’s more buzz about this year’s festivities that any since the inaugural 2004 event, which bowled over even the most optimistic projections by wooing about 1,200 fans on the same weekend that the Charlotte Panthers played in the Super Bowl.

As of early this week, fans from 41 states, Canada, Japan, Australia, and England had purchased tickets to the four-day event, up from its traditional three. An all-access pass goes for $155 and admits fans to several autograph stages, a series of question-and-answer sessions, and two nights of live wrestling cards. Ricky “The Dragon” Steamboat’s son Richie, a budding wrestler, is expected to see action one night.

Part of the spike in interest is undoubtedly attributable to Charlotte resident Ric Flair, who is making his fanfest debut. The “Nature Boy” is being sponsored by Main Event Moments and a signature-photo op is going for a stiff $100, but it’s still a sellout.

Price also has added a lot of new faces in an attempt to keep a fresh feeling to the reunion. Freedbirds Buddy Roberts, Michael P.S. Hayes, and Jimmy Garvin will be there, as well as manager Sir Oliver Humperdink, which is about as close to a Freebirds reunion as possible since the death of member Terry Gordy.

Thunderbolt Patterson will be making his first convention showing, while greats like Jack Brisco, Ole Anderson, and Rip Hawk will mix with fans. Guests brought in by vendors include George “The Animal” Steele and Road Warrior Animal.

Though he is mostly associated with the Northeast, Sammartino will be in Charlotte for the first time, signing autographs and conduction a forum with Ivan Koloff, the man who ended his nearly eight-year reign as WWWF champion in 1971 in a match still regarded as one of the greatest upsets in the annals of the sport.

Price also is following up with his second Hall of Heroes Banquet on Aug. 15. The dinner, at which several Mid-Atlantic legends are honored for their contributions, was a big hit last year.

“When you try something new, you take a chance on it being as good as you hope, realizing that it could also be a flop,” Price said. “I couldn’t have imagined the overwhelming positive feedback we received from those in attendance.”

The banquet promises to be highly emotional. Among the honorees is Johnny Weaver, whose name was synonymous with wrestling in the Carolinas from the 1960s to the 1980s.

Weaver died in February and his daughter Wendi will be on hand to accept the award. What ensures there won’t be a dry eye in the house is that Wendi recently accepted the induction of her late mother, Penny Banner, into a hall of fame in Iowa.

“There’s so many more people that I know. Charlotte is where more the fans are. Those people that’ll be there, they’re the ones that I grew up with. These people, Thunderbolt Patterson, I’ve had lunch with all these people,” she said. “I remember growing up with them, they’d come over and get in the car together and tease me and just joke around. That’s going to be a little harder.”

Other guests of honors include area legends Paul Jones, Sandy Scott, Grizzly Smith, Patterson, Roberts, and Koloff. Smith is ailing and living with relatives in Texas, according to his daughter “Rockin” Robin Smith, and son Sam Houston will accept in his place.

In the words of long-time TV announcer Bob Caudle, a 2007 honoree who will nominate Scott this year: “It was very emotional last year and I think a lot of people will get choked up this year just thinking about how much Johnny meant to wrestling.”

Price also has tinkered with the question-and-answer sessions, as he’ll have WCW announcer Chris Cruise go one-on-one with a guest before turning to the audience, and then pairing Koloff and Samartino for their first-ever joint forum.

“I’m not sure they’ve run their course,” Price said, referring the Q-and-A events, “but I do know you need fresh faces and a fresh concept.”

Otherwise, it’s a lot of behind-the-scenes work, arranging for airline tickets and accommodations, and making sure there are sufficient quantities of inkjet cartridges for dozens of photo prints, Price said.

“I’m just striving to be more prepared for the onslaught this time,” he said. “Our fanfest weekend is a remarkable experience for a lot of people.”