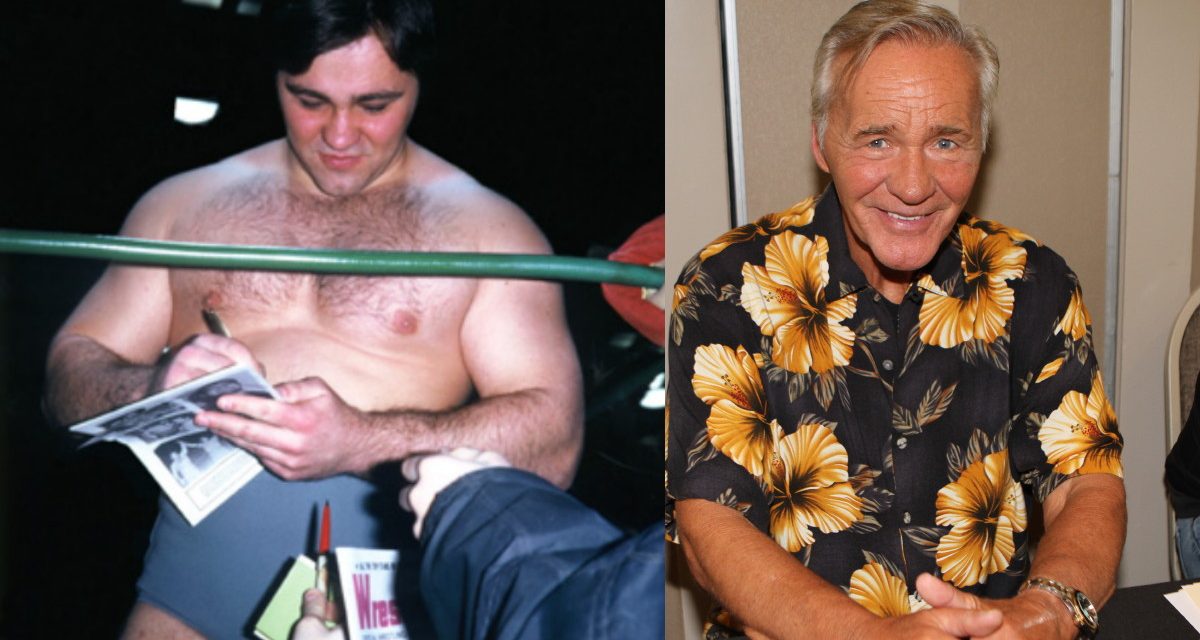 Wrestling fans should be pleased to know the Larry Zbyszko they remember as a caustic heel and hilariously astute colour commentator is as sharp and funny as ever.

Currently promoting his freshly minted memoir Adventures in Larryland!, Zbyszko spoke from his Orlando, Florida home to share his views on his book and everything else wrestling.

“I could have went on but I did it in a certain way,” Zbyszko told SLAM! Wrestling of his 192-page book. “I wrote it like a dream come true story. I didn’t put personal stuff in because that was just as wacky and I didn’t want to take away from the wrestling story.”

Zbyszko decided about five years ago to write an autobiographical account of his career after continuous prodding from friends and acquaintances urging him to put his memories to print.

“It was hard sitting down to write one. So I locked myself in this cabin when I had some time, for about three weeks up in the mountains of Georgia and I wrote about a good third of it.”

He said he could have finished it sooner, but slowed his progress because he believed the market was oversaturated with wrestling books. Zbyszko finally finished his memoir about a year-and-a-half ago.

“I wrote it myself word-for-word,” he said, adding his publisher did not even believe he authored the work. “I said, ‘Yeah, I’m not a dummy, I wrote it.’ I wanted to write it myself because I figured how does a ghost writer know your feelings? If I wrote it myself it would come off real and not like something put together to make a quick buck.”

His book stands out from the deluge of WWE published ones, he felt, because he wrote about how the McMahon family truly operated.

“All the rest of the books were from guys who worked for Vince. And the ghost writers always probably said how great the WWE and Vince was,” he said. “Vince McMahon, number one, his heart was never in professional wrestling. That’s why he thinks the business is a joke; that’s why his show’s full of sexy, raunchy skits and stupid nonsense — a midget is his kid, incest angles… I turned on the TV a couple years ago, there’s two chicks pretending they’re lesbians in a motel room but they don’t see the camera. Triple H, his son-in-law’s humping a dead body in a coffin.”

He said McMahon demonstrated where his real interests lay when he opened a bodybuilding federation in the 1980s. Then, in the ‘90s, he lost tens of millions creating his own football league instead of establishing a retirement or hospitalization plan for his wrestlers.

Aside from McMahon and a few others, Zbyszko’s book spared many of wrestling’s personalities from his biting observations and wit. But when asked, he allowed himself to share his memories and opinions about some of those with whom he had crossed paths.

Hulk Hogan: “Hogan came along at the right time years ago and he was a big, big guy. He started out as Andre (The Giant’s) beat-up doll. But he wound up getting the push from Vince, lucked out at the time getting in a couple of movies, and he did okay for himself at the time.”

He suggested self-promotion helped make Hogan seem like he single-handedly drove the WWF’s popularity in the ’80s. To Zbyszko’s chagrin, Hogan in his book Hollywood Hulk Hogan claimed that the fans who sold out Shea Stadium in 1980 came to see him face off against Andre rather than witness Sammartino exact revenge upon his former protégé Zbyszko.

“Andre already beat him in the Garden before we even got to Shea Stadium. Andre would beat him everywhere,” he said. “Hogan’s good at pushing Hogan, but that’s a complete lie. I don’t like to say bad things about anybody, but unfortunately, I think everybody is seeing Hogan for what his true colours really are now after what’s been going on the last couple weeks all over the news. A Marine is paralyzed and they’re trying to make a reality show out of it for a stupid, spoiled kid who Hogan should have kicked in the ass years ago. He’s pathetic.”

Kevin Nash: “Nash was an example of the guys that got into the business because they were gassed up and big enough, but didn’t love the business.”

Nash was among several New World Order faction members who received high salaried guaranteed contracts as well as a significant say in the direction their on-screen characters took, and abused their power, Zbyszko said.

Scott Hall: “He came into the AWA. He was a very green kid, new guy, and actually wound up wrestling a lot with me at the beginning. Scott’s got great charisma and he does a great job. If he was a little more level headed… But he’s a character. At least he’s doing okay now. I think he went to rehab and he’ll be all right.”

Zbyszko found Flair “harmless but kind of goofy,” adding Flair was among the few who really took his character to heart.

“To him, he is Ric Flair. To him, he has no idea that you’re supposed to pay taxes or live in the real world. He just thinks he’s Ric Flair.”

Vince Russo: “To me, Russo’s someone that doesn’t even deserve to be talked about in the wrestling business,” he said. “WCW people brought him in but it was already at a time when they knew they were canceling it because AOL didn’t want it. But by that time it was the last year of WCW and I was off Nitro. I was so depressed about the whole thing bombing out that I couldn’t even watch it… I turned on the program and the whole crowd is chanting ‘Goldberg’ and the Heavyweight Champion of the World is the writer. That tells you right there how screwed up that was.”

Bill Goldberg: “Goldberg, if WCW hadn’t gotten canceled by AOL, Goldberg would have been their Steve Austin, their Bruno, their guy. It was a phenomenal thing — people bought him, and if they would have programmed him right, which they wouldn’t but I could have, he would still be going.”

STATE OF THE BUSINESS

Zbyszko owns an impressive pedigree, finding success in the World Wide Wrestling Federation, National Wrestling Alliance, American Wrestling Association, and World Championship Wrestling. He never, however, worked for Vince McMahon Jr. or his WWF. According to Zbyszko, that boiled down to the payoff battle he waged against Vince Sr. during his run with Sammartino, his less than obsequious manner (“I don’t kiss butt”), and also Vince Jr.’s obsession with huge bodybuilders pumped up on steroids.

“I wasn’t his cup of tea. He was into men’s bodies. And in the early ‘80s, he switched the business to a cartoon and promoted all the steroid guys that he loved like Hogan and the Warrior, and Zeus and Macho. And I just refused to do that.”

“They’re kind of stuck,” he said about TNA’s TV ratings, which typically hover around the 1.0 mark but not much higher.

TNA’s difficulty in breaking through does not reflect a lack of talent but rather its obsession with copying WWE storylines.

“I wish they would get out of this WWE mentality where McMahon does all these stupid skits and (his) show’s so overrun with boobs and butts, destroying the athletes. If TNA does what they do they’re going to stay where they are. Hopefully, they’ll see the light. They have a chance.”

He lamented the staleness of the business and believed the way to turn around its fortunes is to get back to emphasizing wrestling over all else.

“That’s why people watch it — it’s for wrestling, confrontation, drama, who’s going to win and who’s going to lose. That’s what wrestling is. These stupid skits and these writers and all this nonsense is what’s killing it.”

Zbyszko pointed out fans are making their opinions heard by switching over to mixed martial arts fights, leaving wrestling’s overseers “scratching their heads going, ‘Wow, we’re not getting the big buy rate.’” But rather than change the course, McMahon tries to bribe viewers into tuning to Raw by giving away $1 million every Monday night.

“The audience nowadays is a lot smarter than they used to be so as soon as Vince gives away money, the normal fan says, ‘Ha-ha! They’ve got to give away money to make us watch the show.’ McMahon is not that swift of a wrestling guy — he doesn’t know what to do so he’s giving away money.”

Fans can still get frenzied about angles in spite of the death of kayfabe, Zbyszko insisted, citing the sensation the NWO angle caused as proof.

“It was 1997, ’98, when everybody thought they were so smart, but they bought the New World Order. Talk about heat!” he said, explaining there were people diving into the ring and over the barricades to attack Eric Bischoff.

“There’s always a way to give people drama and keep them in suspense and keep them off balance. Even in the old days when people stabbed you and went berserk and had riots, deep down in their souls, they didn’t believe it. But for that time they watched it, they could really get into it and fantasize and get emotionally involved. And you can do the same thing today… But if you present it like a joke, people take it like a joke.”

These days, Zbyszko spends a lot of his time out on the links playing golf tournaments, and even laces up the boots now and again.

“I kind of cut back on the wrestling but once in a while someone bribes me. But most of them are autograph appearances or book signings now… I feel too good to just sit around. I was lucky, I didn’t get hurt. I feel like I’m 30 years old; I’ve been very lucky and I didn’t do anything stupid either.”

Zbyszko, who made his TNA debut in 2003, has not appeared on television since being defeated in a Loser Gets Fired match against Eric Young at the 2006 Bound for Glory pay-per-view.

“I took a little time off but I might be back with them on TV soon, maybe do something,” he teased.

A return to colour commentary might be ideal, both for him and wrestling: “I should be doing the colour commentating to be honest with you. Because the business could use some help.”

He hinted that another book is a possibility as well, for many of those who told him they loved reading his memoir also wished he had written more.

“Hell, leave it open for volume two,” he said. “We’ll see if we can work out another one. It’ll be crazier than this one.”