“Good ol’ J.R.” is heading to his first Cauliflower Alley Club reunion in Las Vegas next week. Needless to say, for someone who has been involved in the business for almost 35 years, he’s pretty excited about seeing some old friends. 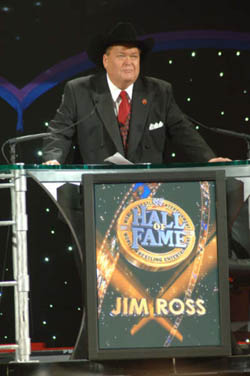 Jim Ross at the 2007 WWE Hall of Fame ceremony. Photo by Mike Mastrandrea

“I’m probably going to see a lot of guys that I haven’t seen since the territory days, or guys I haven’t seen in a long time,” WWE announcer Jim Ross told SLAM! Wrestling a while back.

“Bret Hart is going to be there, and I’ve already exchanged several emails with him. We’re looking forward to visiting. Dr. Death [Steve Williams] is going to get an award, which is another reason to go. I’m sure Danny Hodge is going to try to make it out there, he generally does. Pat Patterson is going to be out there. A lot of guys that I have great respect for and admiration, and those are just a few. I think it’s going to be a real fun deal.”

With the reunion at the Riviera Hotel & Casino switched to weekdays from a weekend — Monday, June 9 to Wednesday, June 11 this year — Ross found that he was able to make it. With Monday Night Raw broadcasting just a short hop away in Oakland, he’ll arrive in Vegas Tuesday afternoon.

Though Ross only became a lifetime member of the CAC recently, he’s been a longtime supporter from afar.

“I think the WWE has taken a different approach to the Cauliflower Alley Club. I can say from a Talent Relations perspective, it was never a matter of a boycott; it was always a matter that we were so busy doing other stuff, you just didn’t take the time to go get involved, even though a lot of our guys were members and were active and were going to it, a lot of our alumni so to speak,” he explained.

The charitable group founded by “Iron” Mike Mazurki as a loose fraternity of wrestlers, boxers and actors has essentially evolved into the closest thing professional wrestling has to an alumni association.

The former WWE vice-president is hopeful that WWE and the CAC can continue to co-exist, and support each other.

“I think the functions like the Cauliflower Alley Club will get more notice. I think Karl Lauer said the WWE bought a table for 10. I think that’s a step in the right direction. It’s just a matter of cultivating your heritage. I’ve always believed, how do you know where you’re going when you don’t know where you’ve been?”