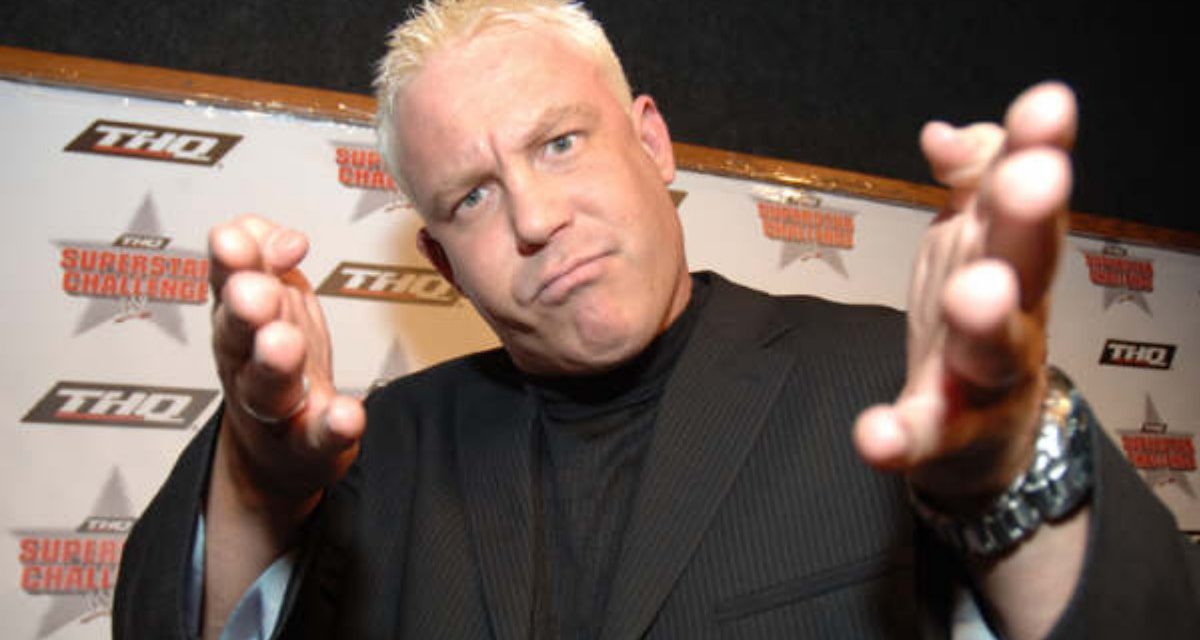 During a recent day off, Ken Kennedy took a break from playing Grand Theft Auto IV — “much to the dismay of my wife” — to answer some questions from SLAM! Wrestling readers with Producer Greg Oliver.

Since the interview was rather, well, last-minute, we only managed to get a few questions sent in. Thanks to those who did respond. The rest of the conversation with Mr. Kennedy and Greg Oliver can be found in the story from May 5th: Getting personal with Mr. Kennedy.

Q: Hi, Personally, I don’t think you’re being pushed enough. I was wondering if you have a lot of imput into where your character is going? [Glenn] 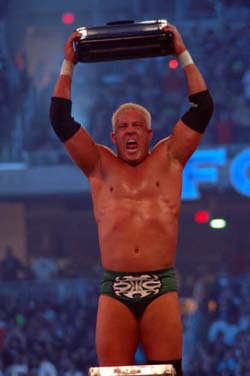 Mr. Kennedy wins the Money in the Bank match at WrestleMania 23. Photo by Mike Mastrandrea

A: “[Laughs] As far as a push goes in the WWE, sometimes it can be a little ridiculous. Yeah, I haven’t been in the forefront, or the limelight, but I’ve been in Puerto Rico filming a movie for the last six or seven weeks. I think, a lot of times, they don’t explain that to the fans. That’s where fans are somewhat misled. I’m on TV, I’m on TV, I’m on TV, and I’m off TV, and I’m off TV for six or seven weeks with no explanation. I can see where they might think that, not being pushed. But, I come back and I get thrown into the mix with a guy who has been in the wrestling business for a long time, and who is very well respected and well liked in our industry, as well as respected by the fans. I couldn’t be happier. And the way that the crowd reacted to what we did on Monday night, and I think that was just the tip of the iceberg — we’ve got so much more left in the tank that we haven’t even uncovered. I’d say to that guy, just hang in there, and bear with me, and it’s going to be a fun ride. I guarantee it.

Q: Do you get a chance to interact with the writers much? Do you pitch ideas to them? Does that happen much? [Greg Oliver]

A: The writers are always accessible to us. I can call them at any time. I try not to call them after certain hours of the night because they have lives just like anybody else. But no, I have access not only to the writing team, but Vince, Stephanie, Hunter, anybody. If you have an idea, you’re always welcome to pitch your idea, or present them. It’s just a lot of times, in our business, maybe because of there’s a lot of Internet writing and stuff like there where people try to find out the scoop ahead of time, so a lot of stuff is kept secret squirrel. A lot of times, you’ll present an idea, and it just doesn’t fit with what their long-term plans are. A lot of times, we don’t find out what’s going on until the day of, and nine times out of ten, 99 times out of 100, you’ll find out what you’re doing the day of. So it’s really hard to come up with something long-term. On two separate occasions, I’ve come up with storylines which the trigger was going to get pulled on, it was just, for whatever reason, injuries, or whatever — and not necessarily about me, either, other people that were involved had injuries, and things just fell by the wayside, and I ended up going in a different direction.

Q: Was Jim Cornette not a fan of yours in OVW? [Courtney Marshall]

A: I wouldn’t say he’s not a fan of mine. I always felt like Cornette didn’t see anything in me. I don’t mean any disrespect to Jim or anything like that because Jim was one of those guys that, from the minute that I got down there, I picked his brain. He helped me understand, and make a lot of connections that I didn’t really understand at the time and I wasn’t making on my own. Jim helped me make those connections. I don’t think he was ever given an opportunity to see what I was really about until the very end, right before he got let go. Right towards the very end when I was in OVW, two or three weeks before he got let go, was when he actually did take notice and did start to allow me to talk on the mic every single week, and I had some pretty entertaining segments. So I can’t say that he never saw anything in me. It’s just that it was maybe too little too late for him. Like I said, in the beginning, he’s looking at 40 guys, or 50 guys, or whatever down there. He’s only got so much time to look at everybody. When he’s out there, he’s got to put on a TV show, he was colour commentary at the time, and we only had an hour-long show, and you can only fit so many guys on that show. You’re not going to get on TV from the first week that you get down there. I had to earn my spot down there basically.

Q: Did you think it was a decent place to learn wrestling? [Courtney Marshall]

A: Personally, I loved being in developmental. It was such a positive environment when I was there. From what I gather, things have changed quite a bit since I was there. I mean, I think the business has changed quite a bit. It’s weird to say this, and I hate to say this, I hate to be that guy — I’m too young in this business to have a ‘Back in my day’ — but it’s weird. Some of the things that go on now in the locker room, the respect and the levels of respect that are shown or sometimes not shown, and the consequences that we would have gone through had it been us going through it at the time, it’s just amazing to me. So things have changed, I think attitudes have changed. I think that certain people coming into the business feel that they’re owed something. They’re in developmental and they think, ‘I’ve made it. I’m a big star now.’ It’s really weird. When I got to developmental, I was as humble as could be, because I knew that at any moment, it could be taken away from me, and I knew that I hadn’t made it until — I hadn’t made it, in my book, until I mainevented a couple of WrestleManias in a row. I think that’s something that’s really changed in the developmental system. But I, particularly, when I was there, we had such a good team of people, and everybody got along and respected each other. We were all working for a common goal, and that was to see the next guy brought up to the next level. That’s what we did, we helped each other, we studied each other’s stuff, and we offered suggestions; we tried to have the best matches possible. We had fun too, in and out of the ring. That was the biggest thing — we had fun. I have to say that some of the best trainers I’ve ever had in my life were Al Snow, Danny Davis, and Lance Storm, Paul Heyman, all those guys from developmental. I wouldn’t be where I am today if it hadn’t been for them. I was kind of sad when OVW shut down, and they closed doors — well, they’re actually not closed down, they still exist but they’re just not in partnership with WWE anymore. 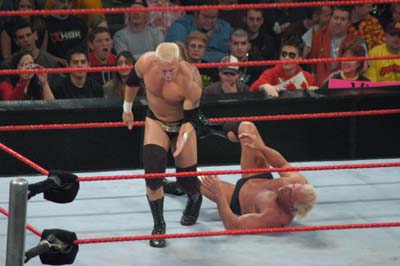 Mr. Kennedy does the Ric Flair strut during their bout at No Way Out in February 2008. Photo by Mike Mastrandrea

Q: Whose idea was it for you to go to Raw? [Courtney Marshall]

A: That was something that I learned 20 seconds before I walked out the curtain, actually. That was something that they kept hidden from everybody up until the minute of. The day that we had that draft, they would actually have five guys, they would randomly select five guys, and go and stand up at the Gorilla position, which is the spot right behind the curtain. We would stand there and just wait. You knew that only one guy was going, whatever the pick was. If Smackdown was up, you’d have five guys go up and stand in the Gorilla position and wait. One person would get picked, and they’d walk through the curtain, and they’d do their thing, and that was it. So it was really a neat experience.

Q: It sounds tense. It sounds like being a real draft pick. [Greg Oliver]

A: That’s what it felt like, it felt like being a real draft pick. Even thought you knew that it was predetermined, that the writers knew, everybody else in the Gorilla position beside you knew what was going on, but you just didn’t know. Then all of a sudden, I remember watching the graphic, and it was rotating through, almost like the wheels on a slot machine, and then it stopped on Mr. Kennedy. Johnny Ace turned to me and said, ‘Go!’ I walked through the curtain, did my thing, and walked back and that was it.

Q: Why be billed from Green Bay, if your from Minnesota? [Frank Salemi]

A: I’m from a little town called Two Rivers, Wisconsin, which is 25, 30 miles south of Green Bay. Growing up, I was a huge Packers fan, and it was something I was real proud of, to be a Packers fan. I just wanted to bring that out right off the bat. When I got signed by the WWE, I actually lived in Green Bay. I lived in Green Bay for several years. It’s still one of my favourite places to visit. I love Green Bay. It’s got such a good atmosphere, and people are friendly, and we’ve got a great football team, great franchise — and the possibility that Brett [Favre] might come back. It’s crazy.

A: [Laughs] I guess he was on Letterman last week and he was giving some suggestions that he might not be done. We’ll see what happens when training camp opens. 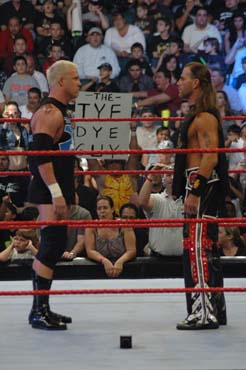 Will Ken Kennedy and Shawn Michaels meet up again? This is from their a match-up at Raw in November 2007. Photo by Mike Mastrandrea

Q: Who do you want to work a program with the most within the next 12 months? [Frank Salemi]

A: Whomever has championship gold around his waist. Really. I’m an equal opportunity ass kicker. There are a lot of people that I’d love to work a program with. I think my program with HBK was a little short-lived. And obviously, if things change and the fans start cheering for me more, it’ll be a little harder to do something like that. I’d love to do something with HHH. It’s something that has been talked about for a while, and it just kind of fell by the wayside for whatever reason. I’d definitely like to get in the ring with him, I’ve worked some house shows with him — him and I have had some tag matches, but to just have one-on-one matches with him would be fantastic.

Q: Which WWE legend or alumni would you have wanted to work with if you could or could have? [Frank Salemi]

A: Steve Austin, definitely. He was the guy that made me want to be a wrestler, made me want watch wrestling again.

Greg Oliver is looking for tips on managing at 17-month-old kid and doing interviews at the same time, without resorting to duct tape, of course. Your thoughts are appreciated at [email protected].