WWE getting better with WWE The Music Volume 8

The latest theme music compilation from WWE is out. While the past few CDs put out by WWE have been subpar, WWE The Music Volume 8 isn’t brutal — but isn’t anything to write home about either. 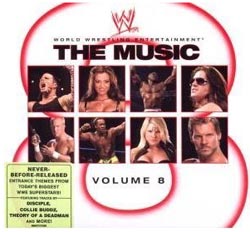 Volume 8 came out March 25th and is a 14-track CD with a lot of the newer themes, plus a couple never-before-released themes. The music the average fan hears every week on TV is OK, but the so-called bonus tracks aren’t quite appealing.

For instance, a remixed Mr. McMahon “No Chance In Hell” is on this set and it’s not clear why. Another Mr. Kennedy version of “Turn Up The Trouble” appears as does yet another incarnation of Chris Jericho’s “Break The Walls Down,” sans the “break the code” music that led to his return last November.

Notable tracks missing from this compilation in this writer’s opinion include Big Daddy V, Tommy Dreamer, Lance Cade and Trevor Murdoch, Cody Rhodes and Paul London and Brian Kendrick. Very little ECW presence is nothing new for WWE and their music releases and that’s obvious in Volume 8 as in the CD jacket, the TV sets are shown for Raw and SmackDown!, but ECW is absent. Big surprise.

Rounding out the list of music is “The Wall” (Mark Henry), “In The Middle Of It Now” (Hawkins and Ryder), the horrid “Sliced Bread” (Jillian Hall), “What Love Is” (Candice Michelle) and a newer, mellow “Ain’t No Stoppin’ Me” (Shelton Benjamin).

Saliva and Theory Of A Deadman partake in this CD and names like that lend a sense of credibility within the music industry to WWE and producer Jim Johnston.

If you dig theme music and don’t feel like getting off the couch to sit in front of a computer to download these songs, then head to the store as WWE The Music Volume 8 is worth the exercise. It doesn’t come highly recommended, but no true theme music fan should ever have a CD like this missing from their collection.

Matt Mackinder is ever the mark for theme music. After all, at the altar when he was getting married, his brother was humming the old Brutus “The Barber” Beefcake theme to keep Matt loose and not pass out. True story.