ORLANDO, Fla. – Lest there be any doubt about how important WrestleMania 24 is to Adam Copeland, better known to WWE fans as Edge, he erases it in a heartbeat. 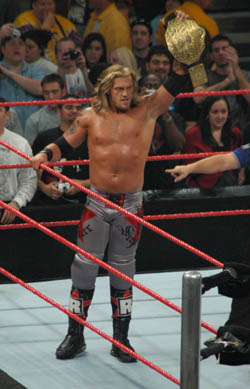 Edge is the champ. Photo by Mike Mastrandrea

“The main event, against Undertaker for the world title, it doesn’t get any better,” Copeland said while addressing SLAM! Wrestling and an assortment of Canadian and French journalists. “This is the biggest match of my career, bar none.”

That’s saying a lot for a man who’s come from a childhood in Orangeville, Ontario to his twin roles as World Heavyweight Champion and the guy fans love to hate. From a seat in the stands at WrestleMania VI to starring in the show himself, he fully admits he’s had quite the journey.

Not that he’d do anything differently. Copeland recounts a story about wrestling in a bar in his younger days and getting his head stuck in the sprinkler system because the ceiling was so low. It ripped out a chunk of his hair, and when he wrestled there again eight months later, the hair was still there.

Laughing sincerely, Copeland says it was all worth it.

“I think back to the shows where I actually paid to wrestle,” he said. “They were all steps I had to take to get to where I am now, and even once I got [to WWE] it took a while for me to find my groove here.”

It’s hard to argue that assessment. The Edge character has literally covered the entire spectrum, from a mysterious lone hero who perched in the stands, to a member of Gangrel’s Brood, to showing a more comedic side while tagging with Christian.

By Copeland’s count, it took a decade for him to really develop the character that suits him best. And to his surprise, it wasn’t the one he expected.

“I always thought it would be as the good guy, as the babyface, but I was wrong,” Copeland said. “I guess I always just assumed that I wrestled better as a babyface, but I don’t think so now. I think I’ve really kind of stumbled into what works best for me.”

As one of the premier heel characters in the business today, he’s undoubtedly good at what he does. He prides himself on trying to get even pockets of fans that cheer him to turn against him by the end of the night.

But Copeland says it’s getting harder. He notices more and more fans rooting for him despite his efforts to be bad. And in Canada, he’s cheered no matter what he does, which doesn’t seem to bother him.

“I guess as the über-villain, it shouldn’t be cool to me, but it is,” he said. “I’ve always said that Canada is like one big hometown. Whether it’s Victoria or it’s St. John’s, I’m treated like a hometown boy. All the Canadian guys are. I think it’s just because there’s not as many of us who can break out, so when one of us does, they don’t let you forget it. And that’s cool, I think that’s great.”

Does that mean fans everywhere will be cheering for him before he wraps up his wrestling career? A year ago, Copeland says he would have said he’d never play the face again.

Now he’s not so sure. While he admits to being intrigued by playing the villain until the end, going out “kicking and screaming,” he also seems to be warming to the idea of a kind of farewell tour down the road – still done the Edge way, of course.

Copeland sees that end coming in less than ten years, stating that he knows his limitations and wants to leave the ring at or near the top of his game. He’s not sure if a future after wrestling would include some kind of industry role, but he hasn’t ruled it out.

For now, his focus is completely on his next match, that one he says is so important to him. Asked to break character and talk about what he’ll do to the Undertaker, Copeland declines. He explains that in character or out, his goal is to go out and steal the show.

Copeland knows that’s a daunting task on this stage, with this card. He knows it will be hard to top the emotion of the Shawn Michaels-Ric Flair match or the spectacle of the Floyd Mayweather-Big Show encounter.

He’s confident though, that he’s up to the challenge. Staring at the potential pinnacle of his career, there’s no place Copeland would rather be.

“The only thing I can think of that would compare to it would be if there was WrestleMania in Toronto and I had Bret Hart,” he said. “That would be the only thing that would match up. And that’ll never happen, so this one is probably the peak of what I can look toward in my career.

“Honestly, WrestleMania is the place.”