ORLANDO, Fla. – WWE CEO Linda McMahon comes across as charming and authoritative. She makes conversation easily and is never at a loss for a thoughtful answer. The pride she has in her family’s company is obvious.

In short, she’s exactly the kind of woman you would expect to be able to transition from the den mother figure of a small company with a handful of employees to the head of an entertainment empire with offices all over the world. 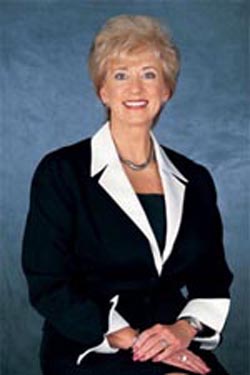 Though she’s been involved with WWE storylines and even found herself participating in a match or two, McMahon doesn’t get nearly the screen time of husband Vince or children Shane and Stephanie. She says that her on-screen role as matron of “America’s most dysfunctional family” was fun while it was running its course, but it’s the business end of things that seems to be her true passion.

Still, with the WWE’s biggest show of the year just days away, the spotlight is on her more than usual at this time of year. Even amidst the frenzied pace and busy schedule of WrestleMania week, McMahon took a few minutes out to sit down with SLAM! Wrestling and other members of the Canadian media to discuss the past, present and future of wrestling’s most famous pay-per-view.

Since she’s been there from the beginning, McMahon has a special insight into what has made the show into the event that it is today. Part of it is the way it brings in stars from other forms of entertainment, which it has since the very first edition.

“WrestleMania I, when you’re talking about bringing in those stars — Muhammad Ali, Billy Martin, Liberace, Cyndi Lauper, Mr. T — that was really the first time it had ever been done in our industry,” McMahon said. “It was just an unbelievable experience.”

Boxer Floyd Mayweather Jr. and his match with The Big Show are getting the lion’s share of the mainstream media attention this year, but McMahon was quick to point out that John Legend, Kim Kardashian and Snoop Dogg will all be part of the event as well. To continue to expose the WWE brand to casual viewers and potential business partners, celebrities form an important part of the blueprint.

“We’re going to attract a huge number of our fans, but the way WWE grows is always expanding its base,” she said. “It’s very important to bring in those outside celebrities to be a part of [WrestleMania]. They come in, they have a great time, and they bring with them their audience.”

McMahon was also enthusiastic about the events that have sprung up in conjunction with the show itself. Citing third-party studies that concluded that WrestleMania 23 week brought an additional $30 million in revenue to Detroit last year, she spoke highly of new ventures like the WrestleManiArt exhibition that showcased the work of Jerry Lawler, among others. Her schedule for the week runs the gamut from a meeting with Orlando’s mayor on Wednesday to the Bacon, Bagels & Biceps brunch Sunday morning that celebrates WWE’s involvement with the Make A Wish Foundation and other charities.

After discussing the expansion of WrestleMania, McMahon also talked about expansion of a different kind by hinting that holding the show overseas isn’t outside the realm of possibility. SummerSlam has found a home abroad in the past (in London’s Wembley Stadium in 1992), but so far, WrestleMania has remained a strictly North American affair.

While acknowledging that it could be done “if it makes sense,” McMahon said the logistical problems are the real hurdles.

“There are so many wonderful buildings being built all over the world,” she said. “The problem comes when there are countries with such a vast difference in time zones. To hold it in Europe, when would it come on? To have it at seven o’clock here, or come on in the afternoon here?”

McMahon wouldn’t tip her hand on the location of next year’s show — it is expected to be Houston, and the announcement will take place on Sunday — but did say the company was already negotiating sites for the 26th and 27th editions. True to form, she also wouldn’t pick a favorite WrestleMania out of the 23 that she’s seen so far.

“To me, every WrestleMania is special,” McMahon said. “It’s always bigger, and it’s always enthusiastic.”