Retro review: Piper’s tale scrappy as he is

“No retreat, no surrender!”

Apart from being “Rowdy” Roddy Piper’s battle cry, the above also accurately describes his 237-page “Me-Versus-The-World” autobiography, In the Pit with Piper, a whirlwind tale of how some kid named Roderick George Toombs became wrestling legend “Rowdy” Roddy Piper. 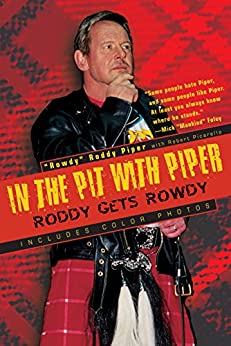 Piper began writing his autobiography in 2000 and finished it two years later. But the work nearly never made it to print, as Piper admitted giving up three times as literary agents Warwick Associates babysat him through the project.

His story opens with his modest start in life and his early entry into the world of professional wrestling. Piper certainly did not wait around for anyone to notice him, as he left home at 13 and became a nomadic bagpipe playing delinquent, living in the streets and youth hostels of Canada. By the age of 15, Piper discovered wrestling and proceeded to win the 167-pound Amateur Wrestling Championship of Manitoba.

For whatever reason, Piper vaults ahead to his oft-repeated anecdote about being squashed by 320-pound behemoth Larry “The Axe” Hennig, in a supposed 10-second bout at the Winnipeg Arena. By doing so, he essentially ignores his tenure with rebel Winnipeg promoter Tony Condello, with whom he actually got his start. (The Hennig match itself made the Winnipeg Free Press write-up on the April 26, 1974 show: “One of the shortest matches in Winnipeg history saw Larry ‘The Axe’ Hennig dispose of Roddy Piper in just under two minutes. It was almost a matter of the bell ringing to start the fight and then immediately echoing back to end the match.”)

Captivating stories about his wild run across the U.S. territories follow before Piper’s arrival in New York. There, he concentrates mainly on the first two WrestleManias, but thereafter, details about his wrestling career become much thinner. His WCW days in particular get barely a mention, besides Piper’s obvious disgust with Vince Russo.

Piper’s bio almost serves as a warning for people thinking about getting into the pro wrestling business. Piper is an iconoclast, even among his rebellious peers, and he assaults any dreamy notions of wrestling as a glamorous occupation.

Throughout his book, Piper makes particular mention of “The Sickness,” a disease exclusive to wrestlers that destroys their minds and bodies. Piper points his finger at promoters for perpetuating “The Sickness,” and does not hold back in spewing his vitriol at just about every promoter, (with Portland’s Don Owen the main exception), he ever worked for. He argues that by threatening the wrestlers with replacements, promoters scared their roster into performing whether road weary or injured, and thereby forced wrestlers to ignore or be indifferent to their own health and safety.

After 33 years of wrestling, Piper said he had witnessed more than that number of his brethren, or “Frat Brothers” as he calls them, die through suicide, drug overdoses, or even murder in the case of Bruiser Brody. Only with the help of his wife Kitty, whom Piper praises throughout his book as the love of his life, was he able to recover from his own Sickness.

But Piper relieves wrestlers of much of their personal responsibilities to themselves, letting himself and his peers off the hook too easily when it comes to the propagation of “The Sickness.” Piper spends a good portion of his book paying tribute to his old wrestling buddies, while at the same time minimizing tales of his and their drinking and illicit drug use on the road.

One wonders how much veteran wrestlers are to blame for “The Sickness” when they tell up-and-comers about paying their dues and fighting through the pain as their forbearers had.

Piper himself admits he paid heavy dues when he first began wrestling, finding himself a target of ribs because of his youth, bagpipes and kilt, not to mention serving as a punching bag for the vets, as well as their gopher, siphoning gas from German Shepherd-guarded farms.

He also admits to taking loads of pain pills to get through his heavy workload as he tore across territories, working not only in Charlotte, but Atlanta and Atlantic Canada as well. And to grow his notoriety, Piper angered some crowds to the point of inciting riots. Is it reasonable to place all the culpability for the wrestlers’ apathy toward their own well-being on the shoulders of the promoters?

Nevertheless, Piper makes a convincing case about the manipulation of promoters, especially in the case of Vince McMahon Jr., who lured in dozens of top stars around the country with false promises of making them the principal attraction of his promotion.

Piper’s book is by no means your typical WWE-endorsed kiss Vince McMahon’s backside memoir. (In fact, the Penguin Putnum bio is not even authorized or affiliated with the WWE.) Piper can at times come across as overly bitter and paranoid at McMahon. There is no mistaking his anger at McMahon for putting Hulk Hogan on top and giving Hogan most of the credit for the success of WrestleMania I. (And he is very obviously jealous of Hogan for becoming the WWF’s “Chosen One.”) Piper remains convinced McMahon undermined him after WrestleMania II to keep Hogan as the company’s number one babyface, which he says eventually convinced him to retire, albeit briefly, after WrestleMania III. Piper even feels McMahon tried to set him up during the steroid trial that nearly consumed the company.

Piper seems to have a split personality when it comes to his life in professional wrestling. On the one hand, he feels it took him off the streets and kept him out of jail, made him a millionaire and allowed him to have a family. But on the other, he vents about the promoters, their policy of cheating wrestlers out of fair pay and their working the boys beyond their limits and in certain cases, to their untimely deaths.

But considering the many contradictions inherent in the business, perhaps his divided assessment is not all that unexpected or unfair.