Jerry Lynn has had it with the big time

It seems like every wrestler’s dream is to make it to the big time, be it the WWE, WCW, ECW, or TNA. But Jerry Lynn is the perfect example of someone who made all of them, and more often than not, came away disappointed by the results.

These days, he’s content to be free from the shackles of employment with TNA or WWE, working independent dates as they come up.

In conversation with Lynn, he is upfront about the hills and valleys of his career. Take the WWE, for example. 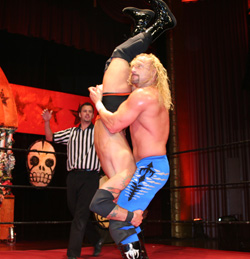 “It was disappointing because I worked 12 years to get there,” Lynn told SLAM! Wrestling. “And well, it wasn’t what I thought it was be.”

It was not all shocking to Lynn, who had worked with WCW as Mr. JL during the mid-1990s. “I felt and still feel I can offer more than a diva could.”

WCW was often chastised by wrestling fans for their use of Jerry Lynn. Fans could see his in-ring ability but were disappointed when he was mostly used a jobber.

Lynn’s release from the WWE in 2001 came as a surprise to Lynn. After the WWE paid for knee surgery, Lynn needed six months to recover. After three months, when Lynn was not ready to return, he was given his release papers.

“They called and I told them I wasn’t ready to return. A week later the papers were in my mailbox.”

TNA was starting right around the time Lynn was released, and Lynn was booked to be on the first pay-per-view. Lynn was a staple in the X Division from day one. He often saw himself in matches with A.J. Styles, Christopher Daniels and Low Ki, the initial faces of the innovative division of TNA.

An August 2004 ring injury placed Lynn on the sidelines. This is when he became an agent with TNA.

“You are the in-between guy between the office and the boys,” Lynn said. “You are often stuck between a rock and a hard place.”

The politics were just too much for Lynn. When he recovered from his shoulder injury, he returned to the ring in June 2005. He was happy to no longer be an agent.

“You have to be the bad guy sometimes. And after a while, it wasn’t fun anymore.”

TNA was a different promotion from when it started in 2002. The company was full of the same politics he thought he escaped when he left WCW and WWE.

“Booking for politics and not for business,” Lynn explained about the changes he saw occur in TNA. “I dare one company to book for business. It would be uncanny how successful they’d be. It will never seem to happen because there are so many egos in this business.”

Lynn began to grow frustrated with the company over the next two years. He was not happy with the way he was being booked. He was also unhappy with his pay.

Why did he leave TNA in August 2007? “It was very simple. I wasn’t happy there. And when they didn’t use me for two tapings in a row, I asked for my release.”

TNA did not give Lynn the option of staying with the company as an agent.

When Lynn looks over his career, he noted two highpoints. The first being when he lost his mask, as Mr. JL, to Gran Naniwa in Japan. The other was October 1, 2000, the night be won the ECW Heavyweight title.

Lynn currently works independent shows every weekend. He resides in Minneapolis, Minn., with his wife and two children.

Although Lynn likes being a wrestler, he often hates the environment that comes with it.

“Promoters continue to treat us like toys. And there will always be the next guy who will be there to stab another in the back to be on top. It is an endless cycle that will never end.”