The surname Dempsey came from his grandmother’s side, explained a magazine article about the grappler. The first name Jack? Well, it was a natural given the fame of the world boxing champion from 1919 to 1926. 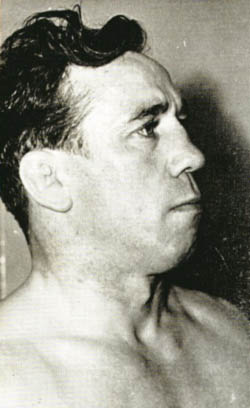 Moore was always associated with the city of Wigan in northern England. Born in Newtown, he gave boxing a whirl at age 11, and when he was 17, he began wrestling amateur at Riley’s Gym in Scholes. In his first pro bout, he lost to Al Jenkins in his debut.

Having grown into a solid pro, Moore certainly had the respect of his peers.

“I was virtually brought up with Jack Dempsey wrestling,” said Roy Wood of Wigan. “He was working for Billy Riley when I was a young lad of about 16. Dempsey was about 10 years older than me. I ended up wrestling him as an amateur, and a professional. He was a small man, but had a marvellous physique, and was incredibly strong.”

In his autobiography, This Grappling Game, British wrestling announcer Kent Walton, talked about Dempsey. “Our Jack learned to dish it out–and take it–as a one-time scrum-half of the Bradford Northern rugby club. He had the rock-solid wrestling technique of a top-star graduate of famed Billy Riley’s Wigan gym. A grim-faced, punishing wrestler, Jack Dempsey defended his title many times with the single-mindedness of a she-bear protecting her cubs.”

His no-nonsense methodology in the ring wasn’t an act, said Wood. “He was an acrobat catcher, you know? At the Hippodrome building in Wigan, he used to be the man that caught acrobats off doing their flips. His arms were so strong, he used to be able to walk up the stairs on his hands — he was a character! As a pro wrestler, he was one of the best, a great all-rounder, with excellent submissions. He was a solid wrestler, and being from Wigan, he didn’t need a gimmick. It used to be that you could see a wrestler’s face change colour, when he was told he was facing a Wigan wrestler!”

Moore always dismissed the showmanship of wrestling. “I personally dislike clowns, gimmicks and showmen,” he told The Wrestler magazine in its March 1963 issue. “I also think that wrestlers other than heavyweights should be top of the bill more often, for many of them are bigger and better attractions.”

Yet to succeed at the box office, he needed foes that the fans disliked. One was “Mr. TV” Jackie Pallo, who talked about Dempsey in his tell-all book, You Grunt, I’ll Groan. “[I]f you put Jack Dempsey and Cliff Beaumont in the ring together, the crowd would probably take forty winks if they weren’t catcalling. There would be no spark, no heat. But put me in with either of them, and we’d have a great fight. They’d provide the wrestling, and I’d throw myself all over the place to provide the spectacle.”

The business in England was changing, and according to the British Wrestling Heritage website, Moore “epitomized wrestlers of his age, being skillful, crafty, tenacious and very hard.” But by the early 1960s, wrestlers who could combine wrestling skill with speed, acrobatics, excitement and charisma had emerged, names like Vic Faulkner and Jon Cortez. “The unkind might say that Jack had none of these, but that would be to miss the point entirely,” it is explained on www.wrestlingheritage.co.uk. “Here was a master of many holds, a student of the Snake Pit, who was able to apply his skill with a touch of genius, and relentlessly punish his opponents. The entertainment value of Jack Dempsey was watching him outwit and outclass opponents with sheer wrestling brilliance.”

“He was a fantastic wrestler who gave delight and entertainment to so many fans,” his niece, Margaret Dickens, told the Wigan Today newspaper after Moore’s death. “He was a real hero and wrestled all over the country. There was nobody to match him and he was a real celebrity.”

During his wrestling career, Moore and his wife had a store in Whelley, which kept him working closer to home in the northern end of England more often than not. “The audiences in the South are better,” he told writer Eddie Caldwell the October 1963 issue of The Wrestler. “They are much more appreciative of scientific wrestling, more sophisticated. In the North ‘rough-and-tumble’ wrestling is demanded by most audiences.”

Later, after retiring under doctor’s orders from wrestling, Moore worked at Gullicks in Wigan. According to Wigan Today, Moore became a well-known local character around Wigan and was rarely seen without his trademark bow tie, beret and King Edward cigar. He would happily tell stories of his wrestling days and even rugby, where he took part in the first competition for the Ken Gee Cup.

Moore was in a nursing home for the last few years. He was survived by his wife, son Michael and daughter Sheila and his grandchildren. A funeral service was held on Monday, November 26 to celebrate his life. He is buried in Gidlow Cemetery.

— with files from Brian Elliott

Greg Oliver is on his first day as a stay-at-home dad. One interview conducted and one story written so far. Piece of cake, right? Email your advice to [email protected].