Laura Caldovino, 27, never thought she’d step foot inside a wrestling ring. And yet there she was Friday night, standing inside the squared circle across from Extreme Canadian Championship Wrestling’s Disco Fury who was handing her a cheque for $1,735 — money ECCW had raised specifically for her.

Just under a year ago, Laura was diagnosed with breast cancer. A casual fan of ECCW, the news of her tragic fate spread quickly. It hit home with Disco Fury in particular — he had lost someone he cared about to cancer in his youth. Laura’s story resonated deeply with him and he knew he had to do something for his ailing friend. And he knew it had to be something more meaningful than a simple Get Well card. 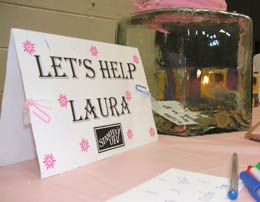 He approached Laura at a different fundraising event six months ago and asked her if it would be okay if ECCW put on a fundraising show to assist her. When she recovered from the surprise, she gratefully accepted Disco’s help. Disco then pitched his idea of a fundraising show to ECCW’s owner, Dave Republic, who quickly understood the urgency of the event.

“We knew we had to get this done,” Republic said. The company began the difficult task of putting on a wrestling fundraising show in Maple Ridge, Laura’s hometown. The optimal location was Westview Secondary School, which, at one point, had been home to several of the ECCW wrestlers. High schools are generally reluctant to host pro wrestling shows in their gymnasiums, but Disco said Westview’s principal, Sean Nosek, had been extremely helpful. “He bent over backwards for us,” the former Westview student said. “He was a huge help.”

While ECCW continued to make the fundraising show a reality, Laura’s condition was worsening. Doctors initially gave her only an 18% chance to survive, but Laura was encouraged by her current treatments — treatments that were, unfortunately, not covered by her Medical Service Plan. That increased the need for fundraising. And because she was out trying to raise the money for the crucial treatments, that meant spending more time away from her 20-month-old son.

“That breaks my heart,” Laura said, tears forming in her eyes. “He’s starting to get angry that I am not at home.” Evidently, her son is developing behavioral problems, putting Laura in a horrible dilemma — spend that special time with her son or spend the time trying to keep herself alive? “I spend every minute I am not in treatment or fundraising with my son and hope that will be enough.”

The treatment was getting expensive, adding to her mounting worries. That’s when ECCW came calling again and told her the fundraising show was now a reality. It would take place November 16th in Maple Ridge. Headlining the show would be an epic match between ECCW legend Scotty Mac and independent wrestling hero “The American Dragon” Bryan Danielson. A buzz began to circulate.

That was the idea, Republic explained. “Whenever there is a charity show,” he said, “guys always call me and say ‘book me.’ There was so much interest in Laura’s show we had to have more matches than we usually would on a regular card.” 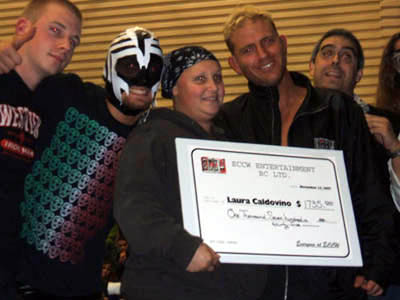 The National Wrestling Alliance even got into the act. When they heard about the benefit show for Laura, they called to see if they could send in some talent. That’s how Danielson got booked on the card.

“They had me on a show this weekend that was only three hours away and asked me if I wanted to go and I said sure,” Danielson recalled. “I have always been a fan of these benefit shows. I think there needs to be more of them. I think it’s what wrestling really needs to do to get back into the good graces of the mainstream community, especially after the Benoit thing. And as a wrestler, I feel that any way you can contribute back to the community, the better off you are.”

And it wasn’t just the wrestlers that were getting into the act. Local businesses and fans donated prizes to be given away. One anonymous donor even gave some gas cards to be awarded. And even though all the money raised from the ticket prices and the concession/merchandise stands went to Laura, fans still gave more money into the donation box.

“I simply don’t know what to say,” Laura said the night of the benefit show. “This is so overwhelming.” Her tears returned. “Thank you isn’t enough. I don’t even know these people and here they are coming together for me. I heard one wrestler even came all the way from Nova Scotia. That’s amazing. I really don’t know what to say to those people. I guess this just shows how much kindness and generosity there still is out there.”

She related the story of one fan who came up and donated $20, apologizing that he could not give more. “Are you kidding me?” Laura said. “Every penny helps so, so much. Whether it’s $2 or $20, it doesn’t matter. These people have done so much and I don’t know what I would do without them.”

Part of the reason people were so generous is that cancer now affects one in two people in some way. Scotty Mac, for example, lost someone close to him to cancer just a few weeks ago. “The timing of this makes this show that much more special,” he said the night of the event. “I’m very proud, as usual, of the people in ECCW. I’m proud to be on this show and to be given the honour to perform tonight for her. I’ll do this as many times as they ask me.”

Danielson concurred, stating that he was touched by the fact that some fans drove for over three hours just to see him. “That’s humbling, really,” he said in the locker room in a post-show interview. “I didn’t realize people were traveling that far for this show. I mean, I’m not on TV or anything — these are just people that love wrestling and are dedicated to it. Wow. There are people out there that really, truly care.”

Laura extended a personal thank you to everyone involved in the show, a gracious act that touched everyone, including The American Dragon who said, “That’s amazing. I’m thrilled to be part of someone’s life like that. I’m fortunate that I haven’t had to deal with any issues like Laura’s, but I’m also fortunate that I am able to help someone like this. There’s really no other response for what Laura said other than gratitude. You only get a few opportunities in life to do something like this to help someone out and it really makes you feel special.”

As the show wound down — a success by any measure — Laura confessed to being tired. Her feet were numb from recent chemotherapy and she wanted to go back home to her son. But before she left, she cried again and offered some advice to people who are suffering from cancer and also given a negative prognosis.

“Don’t ignore the symptoms and the signs,” she said. “I had it for a year and they told me it wasn’t cancer. Think positive and stay around positive people — people like these guys at ECCW. Thanks to them, I will get through this. This is just a tough time in my life — it’s not the end of it.”

Special thanks to everyone in ECCW and to Laura and her family. Anyone wishing to help Laura is welcome to contact ECCW.com or send an email to [email protected].